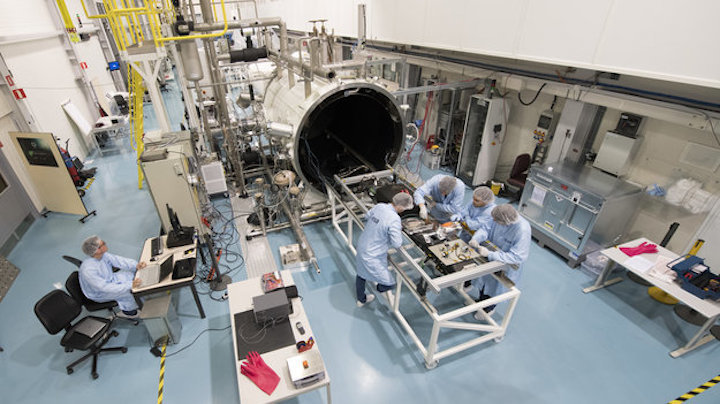 The Delft Hyperloop team at Delft University of Technology is one of 20 finalists selected to compete in the SpaceX Hyperloop Pod Competition 3 on 22 July.

The team visited ESA’s Test Centre in Noordwijk, the Netherlands – normally employed for satellite testing – to see how their electric motor, battery, sensors and brakes performed while running within a vacuum chamber.

Their test rig was slid inside the Centre’s 3.5m-long and 2m-wide VTC-1.5 Space Simulator chamber to be operated for around half an hour at a time. “TU Delft has a long tradition of entering such engineering challenges,” says team member Rico Hageman. “We’d already subjected individual elements to vacuum testing but the large size of this chamber lets us run everything at once.”

Running this high-power system in an airless state presents some challenges, he adds: “In particular there are concerns about the possibility of electrical arcing at low pressure from our high voltage differential.

“We also want to monitor the temperature of the motor controllers as they run, as well as the performance of the carbon fibre pressure housing around our lithium polymer batteries, which are very high-density batteries but not qualified to work at low pressure.” The Hyperloop is a proposed method of high-speed transportation within near-vacuum tubes. With 99.9% of all the air removed, vehicles could theoretically attain speeds in excess of 1000 km/h.

The concept has been championed by SpaceX founder Elon Musk, and is being developed on an open source basis by participants worldwide.

This year’s challenge is to run a half-sized, self-propelled Hyperloop pod at maximum possible speed through a 1.2-km low-pressure tunnel next to SpaceX’s headquarters in Hawthorne, California – while also braking at the end. The 37-strong Delft Hyperloop team submitted an initial design to SpaceX last year. In November, they found out they were one of 20 teams qualified to compete, at which point they began work on their detailed design.

“Everything started from a blank sheet of paper, so it’s been an exciting – and busy – time for us all,” adds chief engineer Vlad Petrescu. “We made a lot of tests of components and systems, and have iterated time and time again. In fact we’ll be returning in a few weeks to test our updated version of the system.

“Everything we ended up with has either been made by us, or else sponsored either directly or in kind – like the opportunity to test here at ESTEC. So during the challenge ESA will be one of the logos on our pod.”

The aim of this challenge is to build up knowledge of Hyperloop running at high speed. For any eventual operational versions of the Hyperloop the pods will be passive in nature, propelled by the tubes themselves using magnetic induction, as in the case of rapidly accelerating roller coasters.