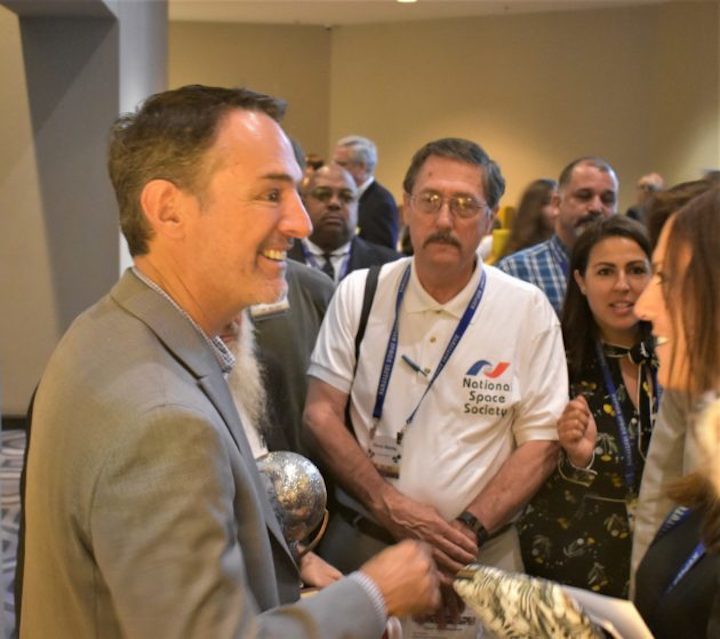 LOS ANGELES — SpaceX’s success owes a lot to the tenacity of the company’s billionaire founder, Elon Musk, but some of the credit has to go to the guy who designed the engines that make the rockets go.

That would be Tom Mueller, who was one of SpaceX’s first employees back in 2002 and now serves as its propulsion chief technology officer.

Today Mueller recounted the creation of SpaceX’s Merlin engines, and dropped some hints about the more powerful Raptor engines to come, while picking up a Space Pioneer Award here at the National Space Society’s International Space Development Conference.

Before signing on with SpaceX, Mueller spent 15 years at TRW, where he was in charge of propulsion and combustion products and liquid rocket engine development.

Musk gave Mueller and his team the task of building the rocket engines that would power SpaceX’s Falcon rockets, which derived that name from the Millennium Falcon of “Star Wars” fame.

An engineer at Barber-Nichols, a firm that partnered with SpaceX in the early days, happened to be a falconer — and she suggested that SpaceX’s engines could be named after kinds of falcons.

That’s how SpaceX’s smallest engine came to be known as the Kestrel, one of the smallest breeds of the bird. The larger engine was named after a larger falcon: the Merlin.

The Merlin rocket engine has gone through several iterations under the guidance of Mueller and his teammates. The latest iteration, the Merlin 1D, revolutionized spaceflight when it entered service in 2013.

“This is a world-class engine,” Mueller said. “This is very easy to make, very low-cost and extremely reliable. Very proud of it. And another thing that this engine had designed into it was fast and deep throttling. Fast and deep throttling allowed us to land the rocket, so this basically enabled recovery of the vehicles.”

Over the past couple of years, the sight of SpaceX’s reusable rockets landing themselves on oceangoing platforms or Florida landing zones has become routine. Reusability already has trimmed the $60 million price tag for a Falcon 9 launch by $10 million, Musk said this month, and there’s more savings to come.

The Merlin 1D’s performance has been tweaked for SpaceX’s upgraded Falcon 9 Block 5 rockets, raising the engine’s liftoff thrust to 190,000 pounds. SpaceX’s propulsion team is also aiming for the engines to be reused up to 10 times before retirement.

“Now we’re getting ‘100,000-mile’ problems, where you see blade-cracking … wearing out seals, thrust chambers cracked,” he said. “We’re more into the 100,000-mile problems, not the infant mortality problems or the design problems.”

Mueller is confident that the problems will be solved, but he’s already shifting his attention to the next big thing.

“I’ve been working on Mars for the last four years, so I’m not going to take any credit for the Block 5 engine and all the upgrades that have happened,” he said. “I’ll take credit for developing the team that developed the Merlin 1D engine.”

The methane-fueled Raptor is expected to be twice as powerful as the Merlin 1D, with liftoff thrust of 380,000 pounds. The BFR’s first-stage booster will use 31 of the engines to pack more punch than the Saturn V did during the Apollo era.

Mueller told GeekWire that he’s been mulling over the Raptor for about a decade. The engine doesn’t make use of the Merlin design, but goes instead with a full-flow, staged-combustion system that requires a clean-sheet design.

Engine development is on track for next year’s anticipated start of short-hop flight tests of the BFR upper-stage spaceship.

“I don’t want to say too much. We’re building up the test stand right now. We’ve got the first flight version of that engine in work. We’ve been running the development engine quite a bit. It’s running great,” Mueller told the audience.

“The Merlin holds the thrust-to-weight record for now,” he said. “But the Raptor’s coming.”