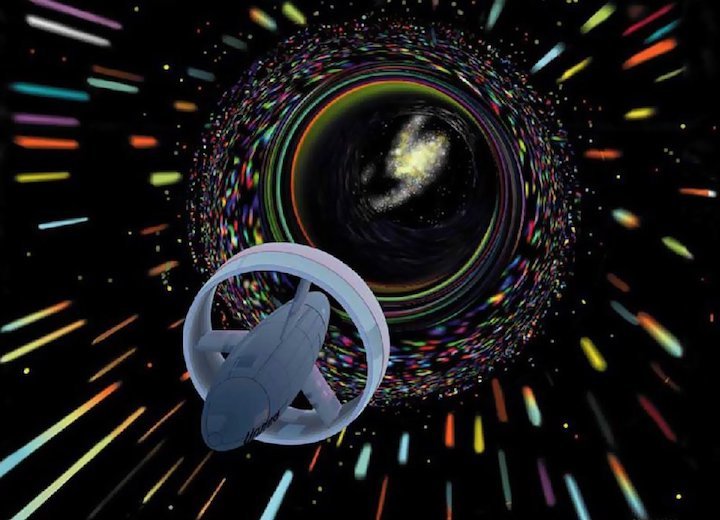 A 1998 illustration of a spacecraft using negative energy to warp space-time and travel faster than light.

Sometime after August 2008, the US Department of Defense contracted dozens of researchers to look into some very, very out-there aerospace technologies, including never-before-seen methods of propulsion, lift, and stealth.

Two researchers came back with a 34-page report for the propulsion category, titled "Warp Drive, Dark Energy, and the Manipulation of Extra Dimensions."

The document is dated April 2, 2010, though it was only recently released by the Defense Intelligence Agency. (Business Insider first learned about in a post by Paul Szoldra at Task & Purpose.)

The authors suggest we may not be too far away from cracking the mysteries of higher, unseen dimensions and negative or "dark energy," a repulsive force that physicists believe is pushing the universe apart at ever-faster speeds.

"Control of this higher dimensional space may bе а source of technological control оvеr the dark energy density and could ultimately play а role in the development of exotic propulsion technologies; specifically, а warp drive," the report says, adding: "Trips to the planets within our own solar system would take hours rather than years, and journeys to local star system would be measured in weeks rather than hundreds of thousands of years."

However, Sean Carroll, a theoretical physicist at Caltech who studies and follows the topics covered by the report, had a lot of cold water to pour on the report's optimism.

"It's bits and pieces of theoretical physics dressed up as if it has something to do with potentially real-world applications, which it doesn't," Carroll said. "This is not crackpot. This is not the Maharishi saying we're going to use spirit energy to fly off the ground — this is real physics. But this is not something that's going to connect with engineering anytime soon, probably anytime ever."

James Т. Lacatski, a DIA official listed as a contact on the report, did not immediately to respond a query from Business Insider.

Where the warp-drive study came from

The nature of this study is still making its way to the public.

What is known is that it's an "acquisition threat support" reference document, which helps the US military anticipate or describe new enemy technologies — apparently including (very, very) notional ones. It was also one work in "а series of advanced technology reports" for something called the Advanced Aerospace Weapon System Applications Program.

That was a larger program that included the Advanced Aviation Threat Identification Program — an effort to investigate reports of UFO sightingsby military personnel, according to a recent story by KLAS-TV in Las Vegas.

The New York Times and Politico revealed AATIP's existence in December. The outlets said Harry Reid, the former US senator from Nevada, helped organize it and secure millions in secret government funding — sometimes called "black money" — for the effort.

A large share of this money reportedly went to Robert Bigelow, a real-estate mogul who's working to build private space stations through Bigelow Aerospace. Bigelow, a friend of Reid's, has for years funded his own UFO research.

An anonymous senior intelligence official told Politico that AATIP began mostly to root out the existence of unknown Chinese and Russian military technologies. But after a couple of years, "the consensus was we really couldn't find anything of substance," the official said.

"They produced reams of paperwork," he added. "After all of that, there was really nothing there that we could find."

Scientists are also skeptical of UFOs, even after viewing spooky videos obtained by AATIP, one of which shows an undated encounter with "an aircraft surrounded by some kind of glowing aura traveling at high speed and rotating as it moves," The Times wrote.

Seth Shostak, a senior astronomer at the Search for Extraterrestrial Intelligence Institute, previously told Business Insider that after 50 years of reported alien visits, "the really good evidence that we're being visited still has failed to surface."

"It is a little odd that aliens would come hundreds and hundreds of light-years to do nothing," Shostak added.

The larger program that looked into the feasibility of warp drives, wormholes, and stargates is meeting similar scrutiny from established experts.

The physics of warp drives

In the warp-drive study, the authors laid out several well-established ideas in physics.

Those concepts include dark energy; general relativity, pioneered by Albert Einstein, that predicted some bizarre yet real phenomena in the universe, like the warping of space-time and gravitational waves; the Casimir effect, which describes the existence of a quantum "vacuum energy"; and M-theory, the idea that perhaps seven extra dimensions — which a warp drive could exploit — may be wrapped up in the four we're familiar with, including time.

It then mashes this work together to lay out a potential use of these properties that'd circumvent Einstein's cardinal rule: Nothing can travel faster than light in a vacuum.

"If one is to realistically entertain the notion of interstellar exploration in timeframes of а human lifespan, а dramatic shift in the traditional approach to spacecraft propulsion is necessary," said the report, which goes on to suggest that a warp drive might be feasible.

Department of Defense via Public Intelligence

The study includes a table of various destinations and how quickly they might be reached by bending space-time to travel 100 times the speed of light.

The way this might work, the report says, is by using a lot of dark energy to expand an extra dimension into a "bubble." Such a bubble would be made large enough to fit a spaceship of perhaps 100 cubic meters, roughly the size of a semitrailer truck.

A contracting region of space-time in front of the ship, plus an expanding region behind it, would then propel the bubble and ship down a sort of space-time tube without technically exceeding the speed of light.

Carroll also says the concept of a warp drive "is not crackpot" — Miguel Alcubierre, a Mexican theoretical physicist, invented the concept in 1994.

"You can't go faster than the speed of light, but what you can imagine doing is effectively twisting space-time so that it looks like you're moving faster than the speed of light," Carroll said. "If you want to go to Alpha Centauri, for example, you can ask yourself: 'Well, could I bend space-time so that Alpha Centauri is next to me, so that it takes a day to go there, rather than tens of [thousands of] years? Can I make the warping of space-time do that?' And the answer is sure, you can do that."

But Carroll says the DIA report goes too far in its analysis.

"There is something called a warp drive, there are extra dimensions, there is a Casimir effect, and there's dark energy — all of these things are true," he said. "But there's zero chance that anyone within our lifetimes or the next 1,000 years are going to build anything that makes use of any of these ideas, for defense purposes or anything like that."

The problems and perils of faster-than-light travel

An illustration of an Einstein-Rosen bridge, or wormhole in the fabric of space.Shutterstock

Carrol said warp drives were so removed from plausible reality because no one knows what negative energy is, how to make it, or how to store it, let alone put it to use.

What's more, the amount of negative energy you'd need to reach a place like Alpha Centauri — the nearest star system to Earth, at 4.367 light-years away — in a couple of years with a 100-cubic-meter ship is truly astronomical.

"If you took the entire Earth and annihilated it into energy, that's how much energy you'd need, except you'd need a negative amount of that, which no one has any clue how to make," Carroll said. "We're not taking the atoms of the Earth and dispersing them like the Death Star would do — we're making them cease to exist."

Then this energy has to be captured, stored, and used with 100% efficiency.

"It's completely crazy talk," Carroll said. "It's not something like, 'Oh, we need better transistors.' This is something that is not anywhere within the realm of feasibility."

The study says its conclusions are speculative, acknowledges the negative-energy figure "is, indeed, an incredible number," and adds that "a full understanding of the true nature of dark energy may be many years away."

However, it suggests that "experimental breakthroughs at the Large Hadron Collider оr developments in the field of M-theory could lead to а quantum leap in our understanding of this unusual form of energy and perhaps help to direct technological innovations."

Nearly a decade on, none of these developments have panned out. The LHC has yet to find any evidence of particles that'd crack the mysteries of dark energy, and experiments have not really advanced M-theory.

But assuming negative energy could somehow be extracted, a planet's worth of exotic matter could be fed into a spaceship's warp-drive engines, and a suitable destination could be picked, the crew might encounter numerous show-stopping problems.

Interstellar travelers may lose control of their ship the moment they start it because of the warping of space itself. Hawking radiation, theoretically found at the edges of black holes and other highly warped regions of space, might roast passengers while shutting down their warp field. And slowing down may be deadly — several light-years' worth of cosmic dust and gas between the origin and destination might turn into a dangerous shockwave of high-energy particles and radiation upon arrival.

"It's possible in the sense that I can't actually rule it out, but I don't think it's actually possible," Carroll said of warp drives and faster-than-light travel. "I think if we knew physics better, we'd just say, 'No, you can't do that.'"

Raumfahrt - The US military released a study on warp drives and faster-than-light travel. Here's what a theoretical physicist thinks of it.
« Zum vorherigen Eintrag Zum nächsten Eintrag »
1377 Views
Created with page4