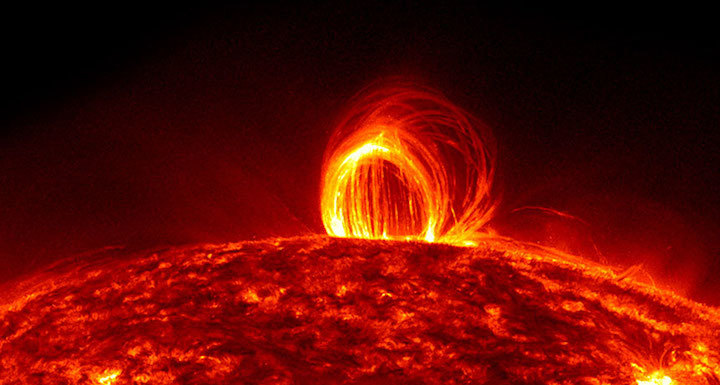 PLASMA PRECIPITATION  Blobs of plasma can fall like rain in the sun’s atmosphere, as seen in the center of this image of a solar flare from July 2012. New observations spotted such rainfall in other surprising spots.

LEESBURG, Va. — Coronal rain may have a finer grain.

A search for plasma precipitation in the sun’s atmosphere reveals that the rain turns up in unexpected places. That discovery might mean the rain can fall as a fine mist as well as a shower, new data suggest. Ultimately, tracing the movement of this plasma could help solve the mystery of why the solar atmosphere, or corona, is so hot.

The sun has rainfall similar to Earth’s, but with plasma instead of water. When hot plasma moves into a cooler part of the corona, it condenses and falls back toward the solar surface, just as hot air condenses into clouds that form water droplets that rain down on Earth. “The physics is literally the same,” says solar physicist Emily Mason of the Catholic University of America in Washington, D.C., who presented the new observations of coronal rain at the Triennial Earth-Sun Summit on May 22.

Scientists have seen coronal rain before, mostly as showers in solar regions associated with flares. But it can happen anywhere in the corona where temperatures go from higher to lower, Mason says. Theoretical studies by others, including her colleague Spiro Antiochos of NASA’s Goddard Space Flight Center in Greenbelt, Md., suggested that tall streamers, which can stretch up to 6 solar radii above the sun’s surface, could be hotter at their base than their tip and so should be full of rain (SN Online: 8/17/17).

“My job was to find it,” Mason says. So she searched for bright blobs of plasma falling within the tall streamers in videos recorded in extreme ultraviolet light by NASA’s Solar Dynamics Observatory — but spotted none.

She did find rain showers, however, in much shorter loops called null-point topologies, which stretch only to about 0.1 solar radii above the surface. “These things rain like crazy,” she says. Coronal rain fell in one of these smaller loops for 30 hours.

The finding is surprising because shorter loops should have less of a temperature difference from bottom to top than the tall streamers, making such precipitation more difficult. What’s more, Mason thinks the shorter loops don’t actually rain more than streamers, but that the plasma blobs in such loops might be larger and easier to see. In tall streamers, because the temperature changes more gradually, blobs would end up being smaller — possibly as small as sand grains. “It’s there, but it’s invisible,” she argues.

Mason later found much dimmer rain in mid-sized pseudostreamers, which supports that idea. Current telescopes can’t see the smallest blobs, but the Daniel K. Inouye Solar Telescope under construction in Hawaii may be able to.

One long-standing solar mystery is that temperatures in the corona are millions of degrees higher than those at the sun’s surface (SN Online: 8/20/17). Scientists think the extra heat may come from an unknown, continuous source — as if the corona were sitting on a hot stovetop — or from a bunch of small, short bursts of energy (SN: 5/30/15, p. 7). The new rain results support the stovetop idea because that would set up the necessary temperature differences in the short loops, says solar physicist Nicholeen Viall of NASA Goddard, who was not involved in the discovery.

“The fact that the rain is there puts limits on how coronal heating could have happened,” Viall says. “The fact that she found it is pretty important.”