Modelling supports hypothesis that the planet’s young moons formed from crashes between others. Lauren Fuge reports. 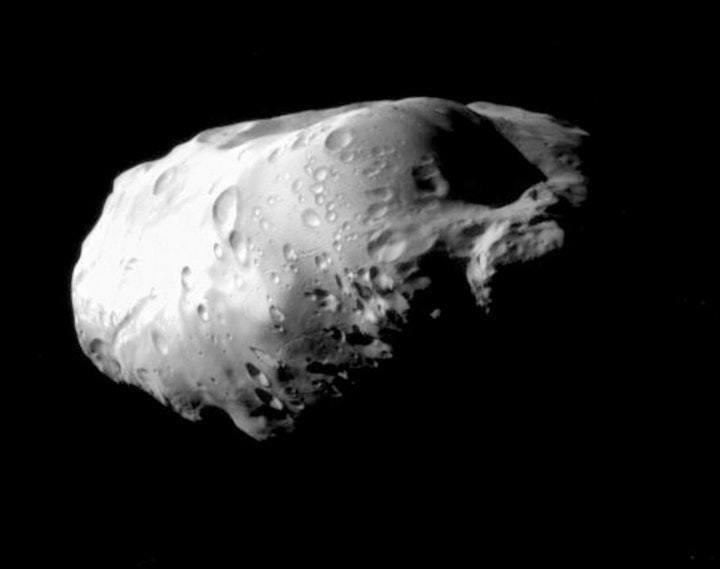 Saturn’s inner moons were likely formed by cosmic smash-ups between an earlier generation of moons, according to new simulations.

Over its 20-year mission, the Cassini spacecraft revealed the spectacularly weird shapes of the moons orbiting within Saturn’s rings, from the ravioli-like Pan and Atlas to the long and skinny Prometheus. Astronomers recently discovered that these objects are younger than the dinosaurs – making them, on cosmic scales, extremely recent – but were still scratching their heads over how they formed.

The go-to scenario for the formation of celestial bodies involves material accreting around a core, which is how the planets in our solar system are thought to have come into being. But previous research suggests that Saturn’s inner moons were created by a series of hit-and-run collisions between an earlier generation of “moonlets” with similar orbits and sizes to the current moons.

A team of astronomers from France and Switzerland has now found that the range of shapes of the moons can indeed be explained by such collisions, thus providing evidence for the violent origin story. The results are published in the journal Nature Astronomy.

The team created two models: one to investigate how the orbits of the moons changed over time, and another to see what shapes are produced when moonlets collide at different angles and velocities.

The models show that the flattened forms of Atlas and Pan can be explained by head-on mergers between earlier moonlets, while impacts at more oblique angles would create elongated shapes like Prometheus. The collision process can also explain why three of the moons — Pan, Atlas and Iapetus — have long, raised ridges around their equators that make them look like flying saucers.

Lead author Adrian Leleu, an orbital dynamics specialist the University of Bern in Switzerland, explains that usually when you start to add more complexity to a simple model, it can break down. But in this case adding parameters such the oblateness, or bulginess, and tidal effects of Saturn actually improved their results

“We aimed at first to reproduce Pan and Atlas, but in the end we got Prometheus-like shapes as well,” Leleu says. “That was a very good surprise.”

The team showed that not only can these shapes be explained by collision processes, but they also occur with the probabilities predicted in their models.

This has important implications for understanding the formation of moons in general; other studies have suggested that this collision process could be how most moons in the solar system originate.