The awesome beauty of Jupiter captured by Juno, in 13 photos

For the past two years, the spacecraft has been taking photos of Jupiter. Here are the best shots. 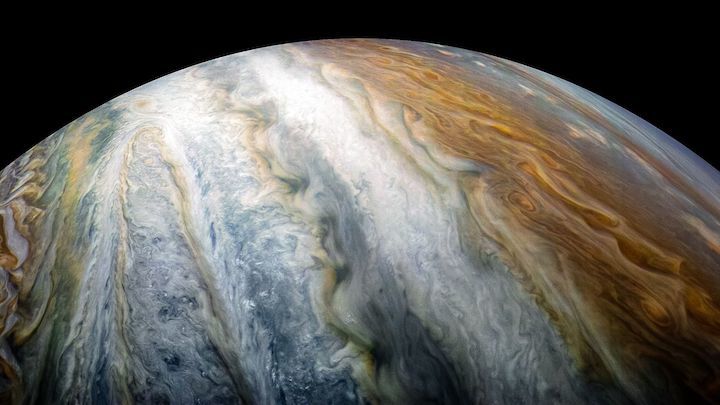 On July 4, 2016, NASA’s Juno spacecraft arrived at Jupiter traveling at a blistering 130,000 mph. Its mission — to orbit the gas giant closer than any craft had done before — was not easy.

Like Earth, Jupiter is surrounded by a field of magnetic radiation. But Jupiter’s is much, much stronger. If Juno didn’t hit a precise region at the poles where the magnetic field is the weakest in its entry, it wouldn’t have survived; the radiation would have fried the craft.

Juno hit its mark, and Scott Bolton, who leads Mission Juno, called it “the hardest thing NASA has ever done.” Since then, Juno has been completing an orbit of Jupiter once every 53 days.

Now Juno’s mission is nearing a crossroads. It’s approved to run through July 2018. After that, NASA can choose to extend the mission — or it could end it, plunging the craft into Jupiter’s gauzy atmosphere, where it would burn up. If this dramatic ending sounds familiar, it’s because last year NASA crashed Cassini, the spacecraft that orbited Saturn, into that gas giant. It was awesome.

But even if Juno is nearing its end, it has already revealed many secrets of the largest planet in our solar system. Discoveries include enormous new cyclones swirling around the planet’s poles, a magnetic field that’s much more variable than expected, a newly discovered belt of ammonia encircling Jupiter’s equator, and some evidence that Jupiter’s core is not as dense and compact as once thought.

The science is great and fascinating. But let’s be honest: We’re here for the pictures. And Juno is delivering unprecedented, beautiful portraits of Jupiter. The images processed by NASA and citizen scientists are arresting: one part van Gogh, one part Pillars of Creation. Jupiter’s clouds have a stormy, gauzy quality, like cream swirling in the largest imaginable cup of coffee. Add to that the awesome size of what’s in them: Even small details on Jupiter can be larger than the entire Earth.

A note: The color and contrast in many of these photos have been enhanced to bring out details in Jupiter’s atmosphere. Much of this cool image processing is the work of citizen scientists, who crawl through the JunoCam archive and stitch together slices of Jupiter into beautiful, whole composite images, and color-correct them to bring out the details in the planet’s clouds. Here are some of the highlights.

The closest-ever picture of the Great Red Spot

On July 10, 2017, the Juno spacecraft flew just 5,600 miles above Jupiter’s most recognizable feature: the Great Red Spot. The storm has raged for 350 years, and it’s so large it could swallow Earth whole. This image is our closest look ever at the spot, which has actually been shrinking over the past few decades.

Here’s a similar image but in colors that are truer to life. (Meaning truer to what you or I would see if we were orbiting Jupiter. Though I have trouble imagining what it would be like to be there and to look at something so massive with my tiny human eyes.) 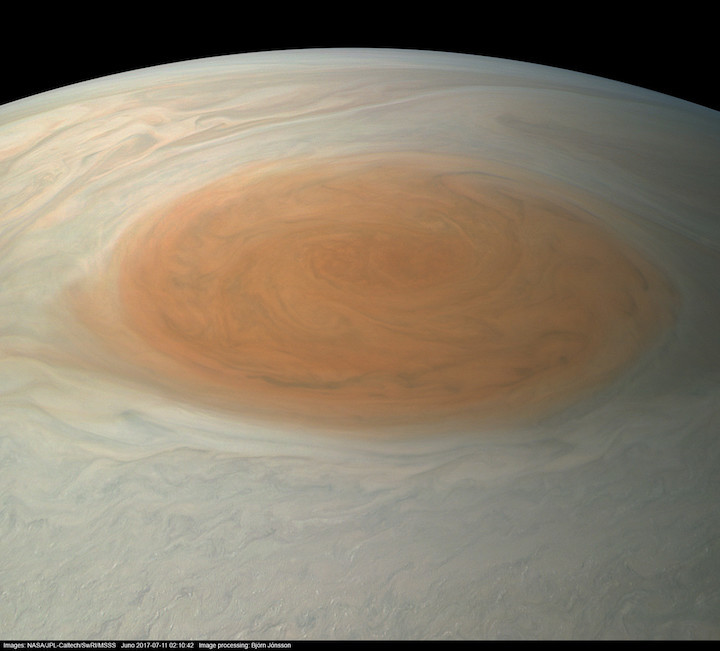 Jupiter’s south pole has a persistent swarm of storms

This is what Jupiter’s underbelly looks like from a distance of 32,000 miles. You’re looking at several storms the size of Earth as they swirl around the pole, storms that are still pretty mysterious. “We’re puzzled as to how they could be formed,” NASA’s Bolton said in a press statement.

Jupiter’s polar regions never point toward the Earth (so we can’t direct telescopes at them to look). This is a view only Juno could capture. 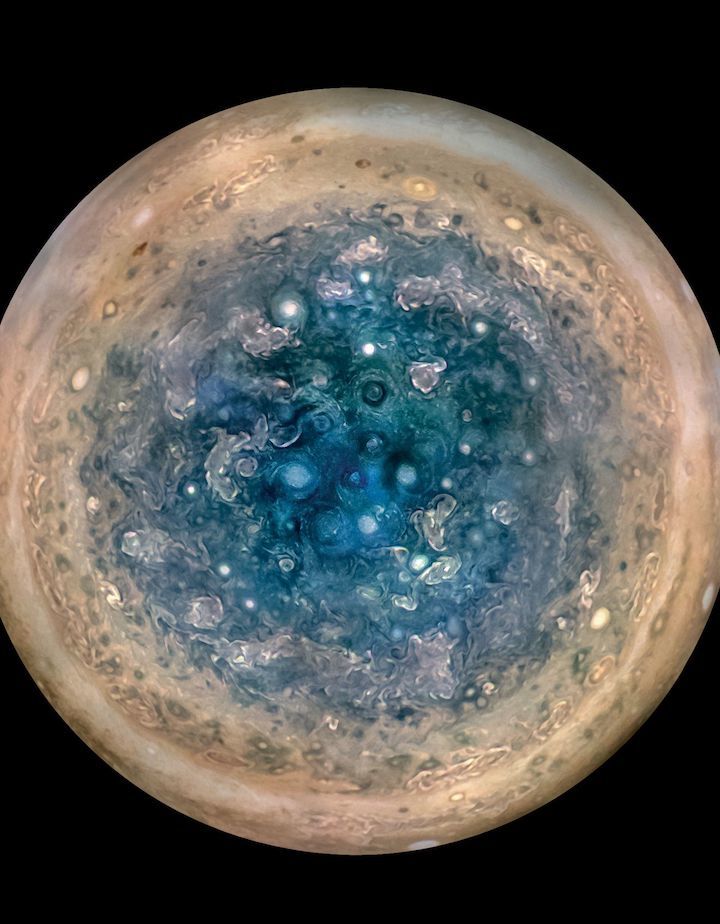 The north pole is similarly stormy

Jupiter’s north pole has eight storms swirling around its center. Scientists aren’t sure why these storms are laid out in such a precise geometrical manner. But they seem to be stable fixtures in Jupiter’s atmosphere, and not fleeting weather patterns. 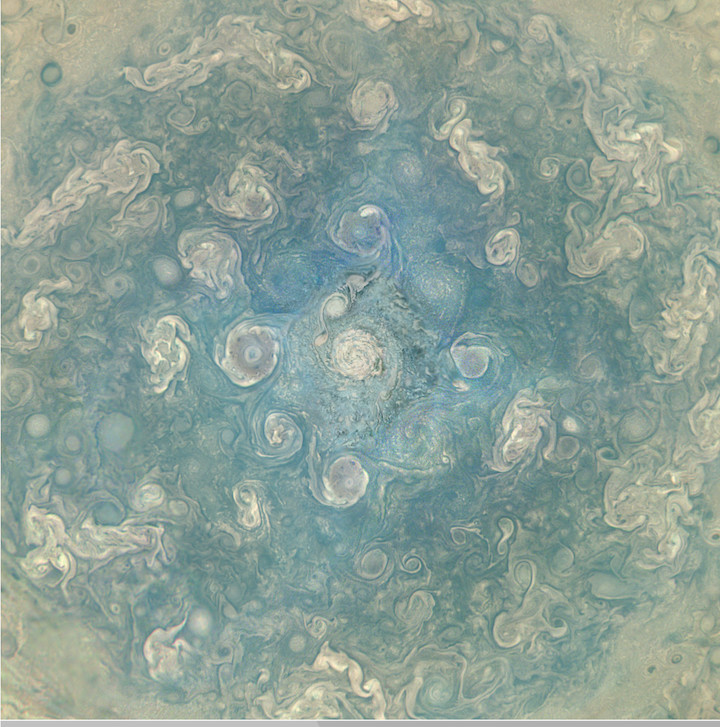 Juno is also equipped with infrared sensors that can capture a three-dimensional view of the storms around the north pole.

This is what Juno sees as it completes its orbit from pole to pole, which takes about two hours.

Jupiter is made up of the same basic ingredients as the sun — mainly hydrogen and helium. With 69 moons, Jupiter is kind of like the solar system in miniature. Scientists are hoping a close-up investigation of its surface can reveal some history of the origin of our solar system. And studying Jupiter helps us understand the cosmos better.

The color-enhanced images (see more below) are certainly show-stoppers. But I also love the more subdued yet intensely detailed images of Jupiter in true color. The clouds look like cream in a gas-giant coffee. 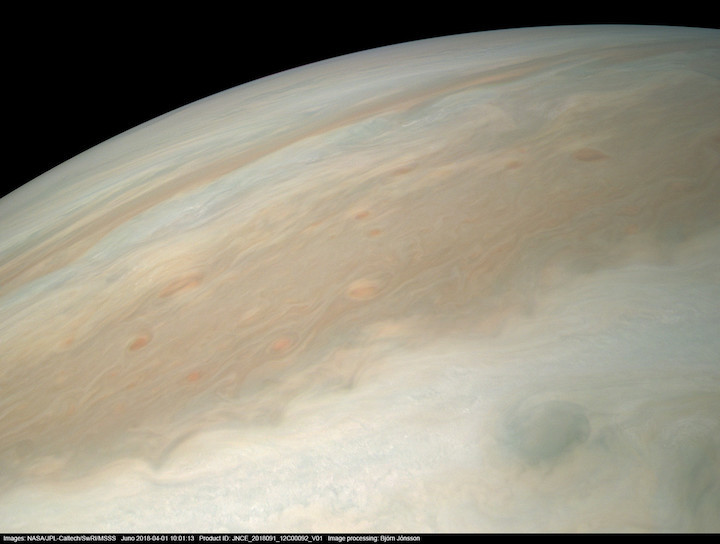 Here are Jupiter’s clouds from a distance about equal to the diameter of Earth. “The vivid colors you see in thick bands across Jupiter may be plumes of sulfur and phosphorus-containing gases rising from the planet’s warmer interior,” NASA explains. Like on Earth, Jupiter’s atmosphere and cloud formations encircle the planet in great jet streams. It’s possible that by studying the physics of these massive weather systems on Jupiter, scientists can learn a bit more about our own. 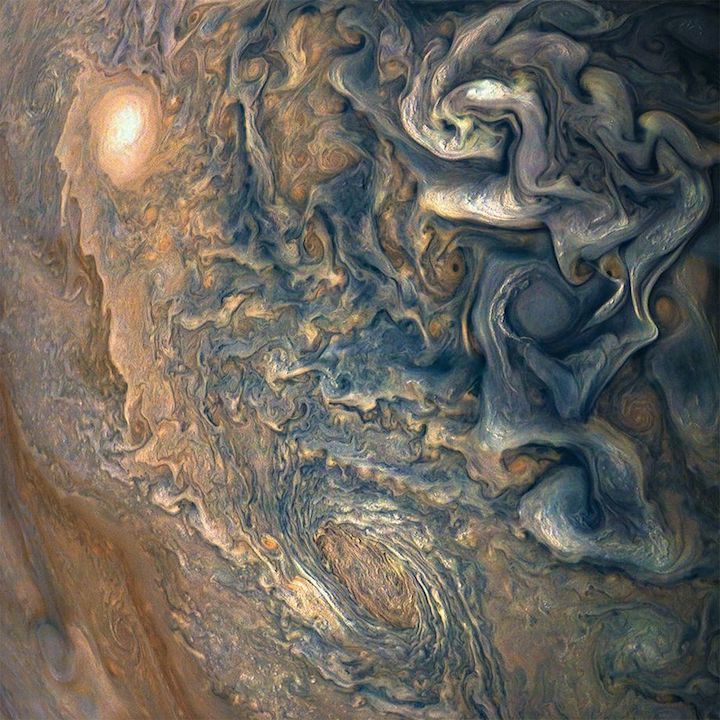 Here’s a cloud system in the northern hemisphere. 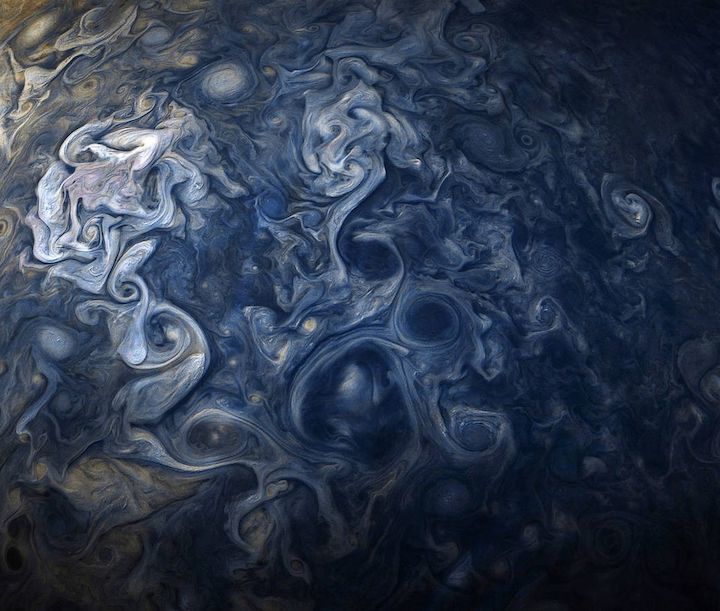 A monstrous storm in Jupiter’s northern hemisphere is the stuff of van Gogh’s dreams. 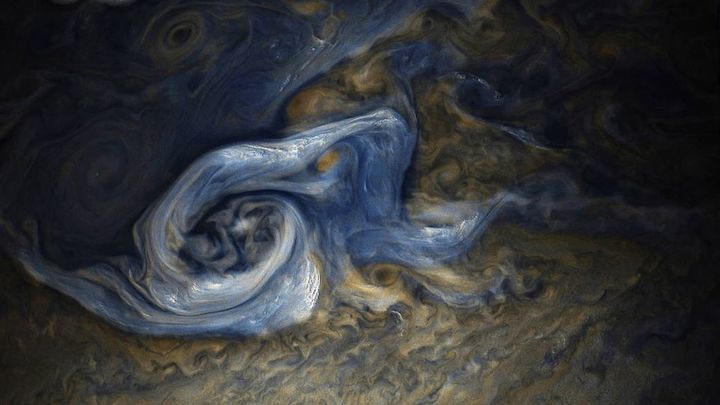 Here’s a zoomed-out view of the northern hemisphere. 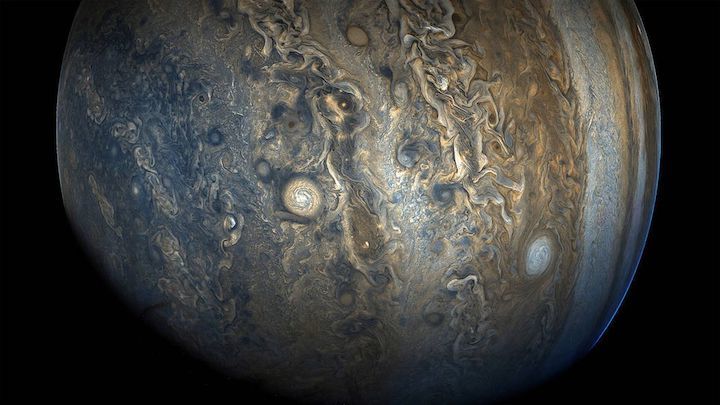 The south pole from a distance

Here, Juno is moving away from Jupiter as it completes an orbit during its 10th flyby. 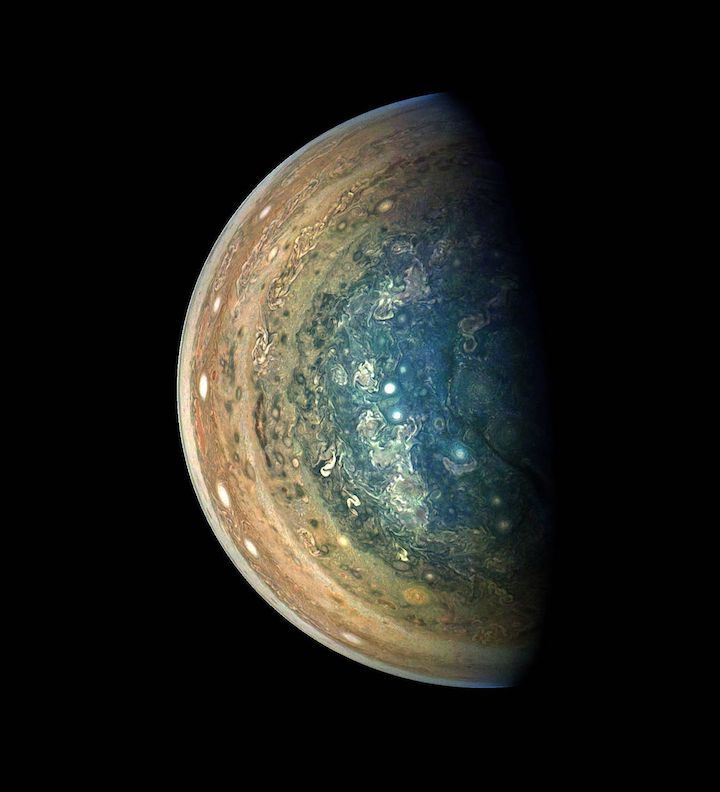 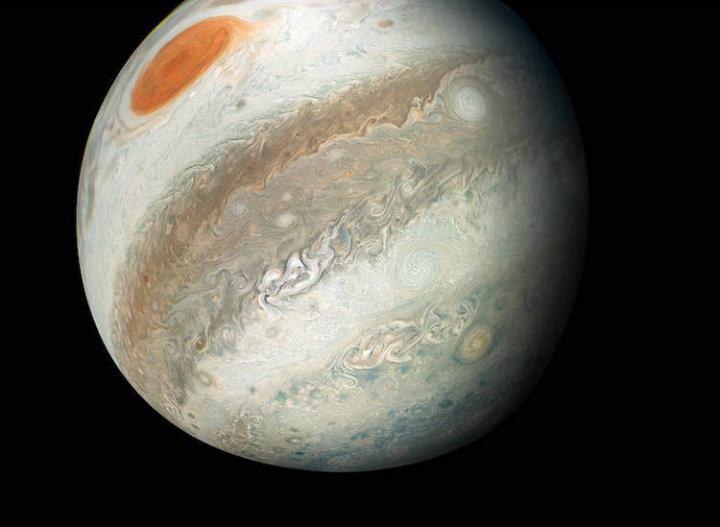 This extraordinary view of Jupiter was captured by NASA’s Juno spacecraft on the outbound leg of its 12th close flyby of the gas giant planet.

This new perspective of Jupiter from the south makes the Great Red Spot appear as though it is in northern territory. This view is unique to Juno and demonstrates how different our view is when we step off the Earth and experience the true nature of our three-dimensional universe.

Citizen scientists Gerald Eichstädt and Seán Doran created this image using data from the spacecraft’s JunoCam imager. The view is a composite of several separate JunoCam images that were re-projected, blended, and healed.