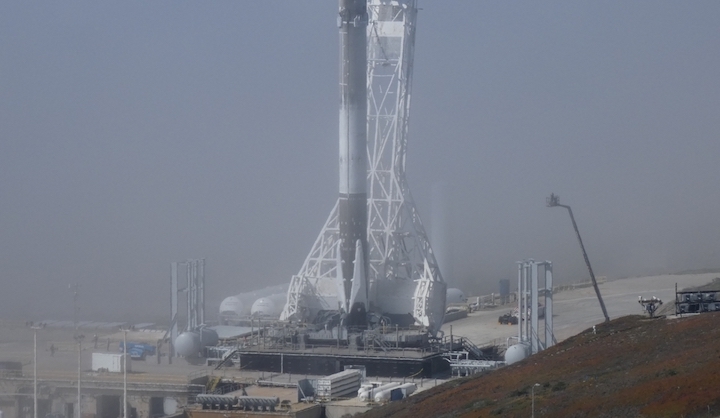 SpaceX conducted a Static Fire test on its Falcon 9 rocket for its second launch in May at Vandenberg Air Force Base in California. This specific Falcon 9 rocket includes the flight-proven core 1043, which launched the classified “Zuma” mission in January 2018. The rocket will launch 5 Iridium NEXT satellites for Iridium Communications and the two Gravity Recovery and Climate Experiment Follow-on (GRACE-FO) for NASA and the German Aerospace Center. Launch is scheduled for Tuesday. 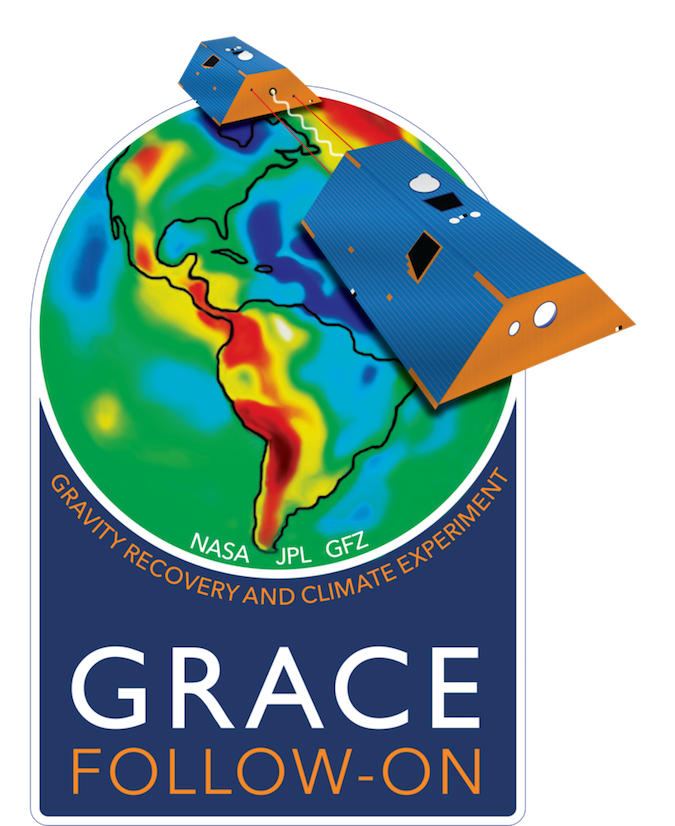 This launch will be the tenth overall by SpaceX in 2018, and the ninth this year for Falcon 9.

The test is a simulation of the entire launch countdown – from rollout of the vehicle to the launch pad to a brief firing of the 9 Merlin 1D engines on the first stage.

The test is meant to be a simulation and practice session for ground crews, engineers and flight controllers, and to ensure that the rocket, ground support and the Range’s systems are all working properly.

The vehicle that conducted the static fire includes the first stage core B1043.2, which launched the classified “Zuma” mission from SLC-40 at Cape Canaveral on January 7, 2018.

Core stage 1043 was first spotted on the first stage test stand at SpaceX’s McGregor, Texas test site on October 10, 2017 being prepared to do a static fire test. However, this would be a much longer test fire, close to or at the duration that the stage would fire during the actual ascent portion of its mission.

After the test firing at McGregor, the stage then headed to Cape Canaveral to be prepared for launching the Zuma mission.

Zuma was originally supposed to launch from LC-39A at Kennedy Space Center on November 15, 2017, but due to fairing issues from another mission, the launch was scrubbed.

With the Falcon Heavy maiden flight waiting on final modifications to LC-39A to be finished – which were being pushed back due to Zuma’s Falcon 9 being at the pad – SpaceX decided to move the launch to SLC-40 at Cape Canaveral Air Force Station.

After multiple fuel loading and draining tests on the vehicle at the pad, Zuma finally lifted off on January 7, 2018. The flight was a success, with core 1043 landing back at Landing Zone 1 at Cape Canaveral.

The first stage was then moved horizontal and transported to SpaceX’s headquarters in Hawthorne, California to be refurbished for its next mission.

After its refurbishment was completed, the first stage departed on March 19, 2018 for Vandenberg Air Force Base, a few hours north of Hawthorne, for pre-launch preparations.

The mission that the rocket is being prepared for is the joint Iridium NEXT-6/GRACE-FO mission. The payloads include 5 Iridium NEXT satellites, being launched for Iridium Communications, and the two Gravity Recovery and Climate Experiment Follow-on (GRACE-FO) satellites, being launched for NASA and the German Research Centre for Geosciences (GFZ). 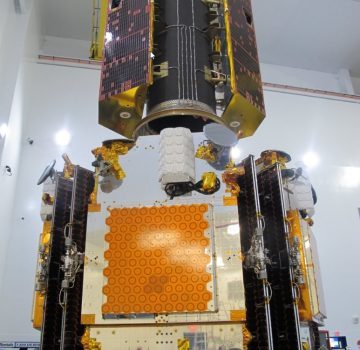 This flight is the sixth for Iridium by SpaceX out of an eight-mission contract. Unlike the previous and future Iridium launches, this flight will have 5 Iridium NEXT satellites, rather than the usual 10.

Iridium NEXT is Iridium Communication’s next-generation constellation to support their satellite phone network. It will replace the aging original Iridium constellation, which began launching in 1997.

This flight also features the two Gravity Recovery and Climate Experiment Follow-on (GRACE-FO) satellites, which – as the name suggests – is a follow-on to the original GRACE mission – which ended in October 2017.

The GRACE and GRACE-FO missions are a collaboration between NASA and the German Research Centre for Geosciences (GFZ). The two GRACE-FO satellites are near-copies of the original GRACE satellites and have been upgraded with more modern equipment, including new lasers for determining the distance between the two spacecraft. 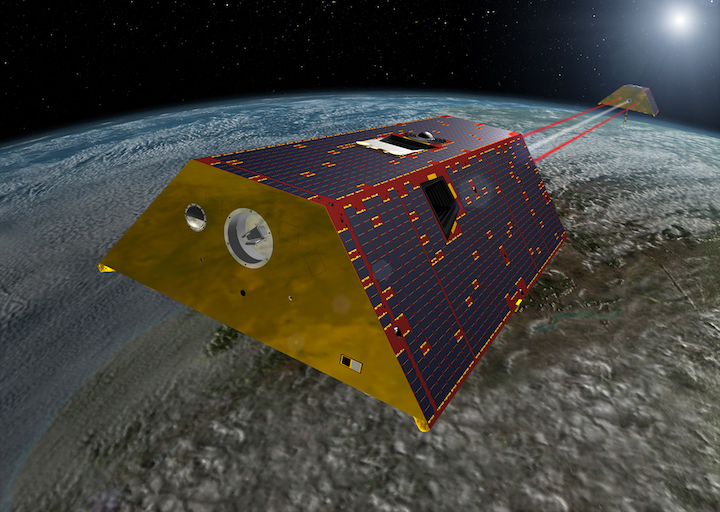 The GRACE-FO satellites are expected to function for at least 5 years.

After this mission, SpaceX has around 16 more missions scheduled for 2018 – 15 Falcon 9 flights and 1 Falcon Heavy, although some of the later missions will likely slip into 2019. According to SpaceX CEO Elon Musk, they hope to launch more rockets this year than any other country. 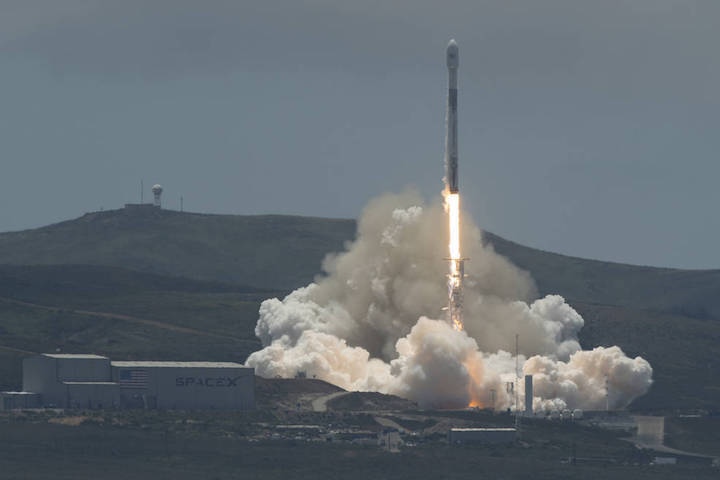 The NASA/German Research Centre for Geosciences GRACE Follow-On spacecraft launch onboard a SpaceX Falcon 9 rocket, Tuesday, May 22, 2018, from Space Launch Complex 4E at Vandenberg Air Force Base in California. The mission will measure changes in how mass is redistributed within and among Earth's atmosphere, oceans, land and ice sheets, as well as within Earth itself. GRACE-FO is sharing its ride to orbit with five Iridium NEXT communications satellites as part of a commercial rideshare agreement.
Credits: NASA/Bill Ingalls

A joint U.S./German space mission to track the continuous movement of water and other changes in Earth’s mass on and beneath the planet’s surface successfully launched at 12:47 p.m. PDT Tuesday from the California coast.

The twin spacecraft of the Gravity Recovery and Climate Experiment Follow-On (GRACE-FO), a joint NASA/German Research Centre for Geosciences (GFZ) mission, lifted off on a SpaceX Falcon 9 rocket from Space Launch Complex 4E at Vandenberg Air Force Base in California, sharing their ride into space with five Iridium NEXT communications satellites.

Ground stations have acquired signals from both GRACE-FO spacecraft. Initial telemetry shows the satellites are performing as expected. The GRACE-FO satellites are at an altitude of about 305 miles (490 kilometers), traveling about 16,800 mph (7.5 kilometers per second). They are in a near-polar orbit, circling Earth once every 90 minutes.

“GRACE-FO will provide unique insights into how our complex planet operates,” said Thomas Zurbuchen, associate administrator of NASA’s Science Mission Directorate at NASA Headquarters. “Just as important, because the mission monitors many key aspects of the Earth’s water cycle, GRACE-FO data will be used throughout the world to improve people’s lives – from better predictions of drought impacts to higher quality information on use and management of water from underground aquifers.”

Over its five-year mission, GRACE-FO will monitor the movement of mass around our planet by measuring where and how the moving mass changes Earth's gravitational pull. The gravity changes cause the distance between the two satellites to vary slightly. Although the two satellites orbit 137 miles (220 kilometers) apart, advanced instruments continuously measure their separation to within the width of a human red blood cell.

GRACE-FO continues the U.S./German partnership of the original GRACE mission, which operated from 2002 through 2017. “This mission continues and advances an amazing achievement of science and technology pioneered by the United States and Germany,” said Zurbuchen.

For 15 years, GRACE’s monthly maps of regional gravity variations provided new insights into how the Earth system functions and responds to change.

Among its innovations, GRACE was the first mission to measure the amount of ice being lost from the Greenland and Antarctic ice sheets. The mission improved our understanding of the processes responsible for sea level rise and ocean circulation, provided insights into where global groundwater resources are shrinking or growing, showed where dry soils are contributing to drought, and monitored changes in the solid Earth, such as from earthquakes.

"Extending the data record from GRACE will allow us to better distinguish short-term variability from longer-term trends," he said.

The GRACE-FO satellites will spend their first few days in space moving to the separation distance needed to perform their mission. When they reach this distance, the mission begins an 85-day, in-orbit checkout phase. Mission managers will evaluate the instruments and satellite systems and perform calibration and alignment procedures. Then the satellites will begin gathering and processing science data. The first science data are expected to be released in about seven months.