German physicists launched the SpaceDrive project to explore possible sources of error in EmDrive experiments. Their first experiment identified a possible source of false positives in past successful EmDrive tests. 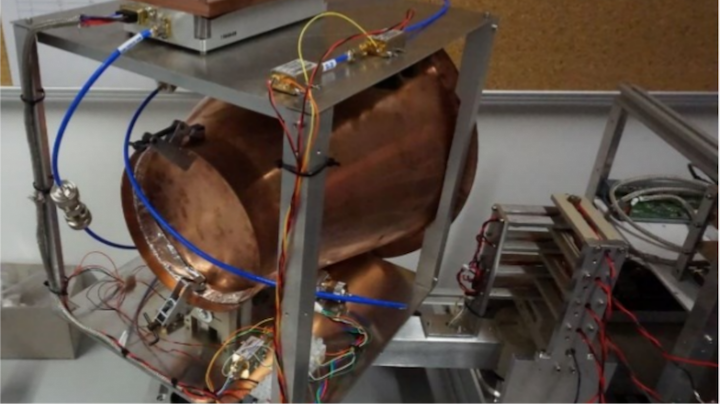 Since the beginning of the space race over half-a-century ago, humans have walked on the moon and remotely explored the surface of two other planets in our solar system with robots. But so far, only a single spacecraft has made it to interstellar space: Voyager 1, launched in 1977, is currently speeding through the void at a blistering 40,000 miles per hour and covering about 325 million miles per year. Yet even if it was headed in the direction of Alpha Centauri, our closest stellar neighbor, it would take Voyager over 80,000 years to arrive. For a little more perspective on the timescales involved here, 80,000 years ago on Earth the first homo sapiens were spreading out of Africa into Asia.

This is all to say that from a cosmic perspective, Earth is very, very isolated. Perhaps an intuitive idea of this isolation is why our science fiction stories have always been haunted by dreams of interstellar travel, but recently physicists have started to seriously consider how to turn those fictions into reality.

In a paper presented at the Aeronautics and Astronautics Association of France’s Space Propulsion conference this week, a team of German physicists announced SpaceDrive, a research program exploring exotic propulsion mechanisms that they hope will one day make interstellar space travel a reality.

In particular, they described their research results on the EmDrive, a type of “impossible” spacecraft engine that is theoretically able to generate thrust without any propellant. It’s a bit like trying to design a Formula One race car that doesn’t need any gas and is instead powered by the driver pushing on the inside of the windshield. While the researchers didn’t crack the secret to the propellantless-engine, they did manage to create a hypersensitive measurement device and identify sources of possible false positives that will help to better characterize EmDrive experiments in the future.

Normal rockets are limited in their ability to provide interstellar transport because they can’t carry enough fuel to achieve velocities that would make interstellar travel feasible in human time spans. Overcoming the limitations of normal rocket propulsion systems will be necessary for interstellar travel. One leading nonreactive system is being explored by Breakthrough Starshot, which plans to use incredibly powerful lasers to accelerate thumbnail-sized chips to 20 percent the speed of light toward Alpha Centauri. Another strong candidate for nonreactive systems is the EmDrive, which could theoretically be scaled up to propel much larger spacecraft.

The EmDrive concept can be traced back to a paper written by the physicist Roger Shawyer in 2001, but it wasn’t until relatively recently that the idea gained much traction. In 2016, a group of physicists gathered at Estes Park in Colorado to discuss the feasibility of exotic propulsion systems like the EmDrive. Shortly after the meeting, a NASA paper describing an initial successful test of an EmDrive prototype was leaked. Then Chinese state media reported that it, too, had physicists researching these impossible engines who had seen positive results. It wasn’t long before 3D-printed EmDrive prototypes appeared online so that researchers and amateurs could conduct their own EmDrive tests at home.

What was once pure theory seemed to quickly be turning into a feasible reality.

The EmDrive prototype developed by NASA and described in its leaked 2016 paper basically consists of a closed copper cone mounted on an incredibly sensitive pendulum sensor that can detect even the slightest movements. The cone was then placed in a vacuum chamber and its insides were bombarded with microwaves. Incredibly, when these microwaves bounced off the walls of the cone, the pendulum registered a very small amount of thrust that varied with the power of the microwaves supplied to the device. The result was incredible because it appeared to violate the conservation of momentum, a fundamental law of physics that states for every action there is an equal and opposite reaction.

"The issue involved here is whether the experiment is seeing something real or not," Jim Woodward, a physicist at California State-Fullerton and a leading researcher on exotic propulsion mechanisms, told Motherboard after the NASA paper was leaked. "I suspect there may really be something there, but the result they're seeing can't actually be explained in terms of the theory they're proposing. So the question is: what is causing it?"

The researchers themselves broached an explanation that attempts to account for the thrust by invoking pilot wave theory. This theory explains the strange properties of quantum matter (such as entangled particles that can instantaneously influence one another) by suggesting there are ‘hidden variables’ at work that can account for perceived quantum weirdness with regular Newtonian physics—no “ spooky action at a distance” required.

The researcher’s explanation was tentative and didn’t offer a coherent model of exactly how this would work. This led to a flurry alternative explanations including a nonlocal intepretation of pilot wave theory, which keeps quantum effects in the mix, and a theory of radiation pressure posited by Shawyer which claims that microwave radiation puts pressure on the walls of the EmDrive to generate thrust. Woodward, on the other hand, offered up Mach effects as “ the only possible explanation” for the observed thrust.

According to Woodward’s Mach effect theory, when a body of mass is accelerated, some of the force applied to that body does not result in kinetic energy but is stored as potential energy in the body. While the acceleration is changing the internal energy of the body changes as well, which manifests itself as a change in the resting mass of that body. The accelerating body is essentially being squished between the force being applied in the direction of its acceleration and the push back from the rest of the material in the universe via the gravitational field.

This mass fluctuation effect could account for the thrust observed in NASA’s EmDrive prototype. If the microwaves propagating in the EmDrive cone are applying thrust force to the material that the cone is made of, then you might explain the trust generated this way. “In my view, it’s the only physics that I know and trust to not involve wishful thinking and magical fields,” Woodward told me when we spoke after the NASA leak.

There’s a strong case to be made for Woodward’s Mach-Effect theory, but a far more obvious explanation was that the observed thrust was simply due to an error. In their paper, the NASA researchers strove to eliminate all the major sources of error, such as electromagnetic interference, vibration or thermal expansion of the cone. Still, a team of German physicists are working on a super precise testing facility that will hopefully put to rest the question of whether the observed thrust was just an error.

As detailed in the paper presented by the researchers this week, over the past four years they have designed a sophisticated balance that is placed in a vacuum chamber and measures the movement of an EmDrive prototype using lasers. NASA’s EmDrive only produced a few micro-Newtons of thrust, but this measurement system is able to measure the degree of thrust at a sub-micro-Newton level.

The prototype EmDrive built by the German researchers was a copper cavity with the same dimensions as the prototype tested by NASA in 2016. Although they limited the power supplied to the EmDrive to just 2 watts, their sensors were able to measure roughly 4 micro-Newtons of thrust. Extrapolating from this data, that means that their EmDrive prototype had a thrust-to-power ratio of about 2 milliNewtons per kilowatt, which is almost twice the thrust-to-power ratio achieved at NASA (1.3 milliNewtons per kilowatt).

“This clearly indicates that the ‘thrust’ is not coming from the EmDrive, but some electromagnetic interaction,” the researchers wrote in their paper. “Although we used twisted or coaxial cables as much as possible, some magnetic fields will eventually leak through our cables and connectors.”

When they calculated the forces resulting from a combination of Earth’s magnetic field, the length of their cables and the electric current flowing through them, they found that the result was equal to a few micro-Newtons, which is comparable to the ‘thrust’ they had observed in the vacuum chamber. “We therefore suspect that the interaction of the power feeding for the amplifier with the Earth’s magnetic field masked any real thrusts that could be below our observed value,” they wrote. In a future test, the researchers said they planned to add Mu-metal sheets to the setup that would shield the device from these unwanted outside electromagnetic influences. Yet as they note in their paper, this type of shielding was not used during the NASA experiments.

Although the German researchers did not manage to demonstrate thrust with their EmDrive experiments, they did help identify a possible source of false positives in EmDrive experiments. The researchers acknowledge that it was a “great learning experience with the possibility to find something that can drive space exploration into its next generation.”

Moreover, they managed to create the hypersensitive instrumentation that will likely be necessary to measure the very small amount of thrust that will be produced by these EmDrive prototypes if there is any thrust being produced at all.