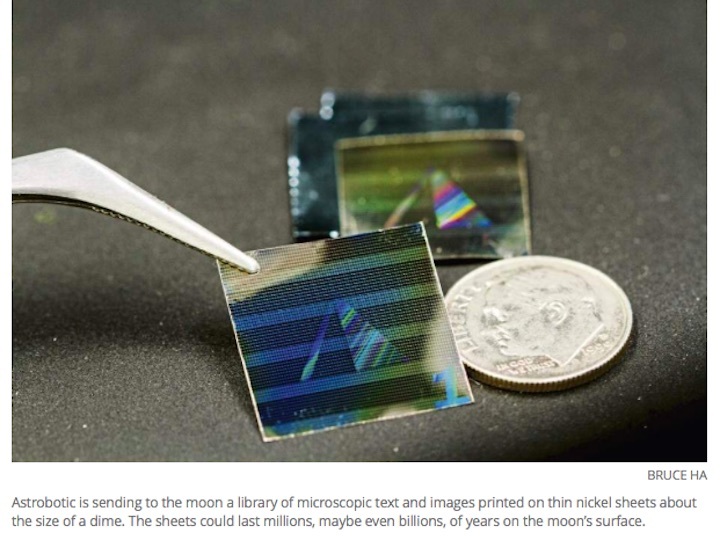 The history of the War of 1812, a chronicling of the world's languages and this list of all the characters from the Fast and Furious movies is headed to the moon.

Millions of pages from Wikipedia will be contained in the Lunar Library that Astrobotic will send to the moon's surface on its maiden launch scheduled for 2020.

The Pittsburgh-based space delivery company teamed up with the Arch Mission Foundation to put the Lunar Library aboard the Peregrine Lunar Lander. The library of microscopic text and images printed on thin nickel sheets about the size of a dime could last millions, maybe even billions, of years on the moon's surface. The Lunar Library will join the foundation's Solar Library, which was launched in secret aboard the first flight of SpaceX's Falcon Heavy rocket in February . The Solar Library will orbit the sun for billions of years and contains Isaac Asimov's Foundation Trilogy.

“We can definitely preserve our unique cultural heritage and biological record in a way that will survive for millions to billions of years, and that has not been possible before,” Nova Spivack, cofounder and chair of the Arch Mission Foundation, said in a statement. “We see the Lunar Library as the ultimate in cold storage for human civilization.”

The Lunar Library will consist of the entirety of Wikipedia, the Long Now Foundation's Rosetta Project and other content that will be announced later this year. The Rosetta Project is a catalogue of the world's languages stored digitally and printed in tiny, tiny text on a disk that fits in the palm of your hand.

As the launch nears, the Arch Mission Foundation will print the entire English Wikipedia and versions of the online, publicly accessible and edited encyclopedia in other languages. Those printed pages will then be laser-engraved on thin nickel discs with super small text and images. The size of a letter will be 1 micron, about the size of bacteria. An entire page fits within the width of a human hair. About 30 million pages will fit inside a circle about the size of DVD and slightly more than 1 millimeter thick.

But, the text can be read using at least a 1,000x microscope, which the Arch Mission Foundation hopes future societies will have access to.

Nickel can withstand the radiation on the moon and hold up under extreme temperatures.

“It's humbling to think our mission to the moon will deliver something that could be read millions of years from now.,” Astrobotic CEO John Thornton said in a statement. “Arch's Lunar Library will be a monument not only to human knowledge and culture, but also the first commercial mission to the Moon.”

Astrobotic is based in Pittsburgh's Strip District.