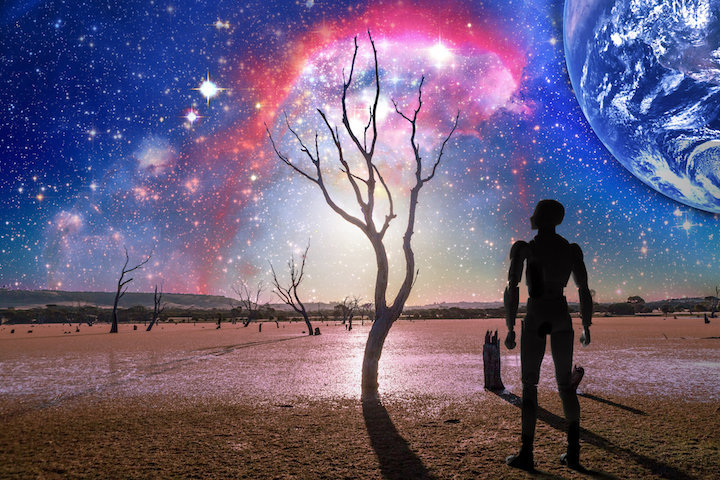 Could alien life exist in a parallel universe? Computer simulations from two new studies suggest the idea might not be out of this world.

Should the search for alien life in our universe come up empty-handed, it might be worth checking in on a neighboring universe instead.

According to a new pair of studies in the journal Monthly Notices of the Royal Astronomical Society, there’s a decent chance that life-fostering planets could exist in a parallel universe — even if that universe were being torn apart by dark energy.

The idea that our universe is just one of many, perhaps infinite, other universes is known as the multiverse theory. Scientists have previously thought that such parallel universes, if they exist, would have to meet an extremely strict set of criteria to allow for the formation of stars, galaxies and life-fostering planets like those seen in our own universe.

In the new study, researchers ran a massive computer simulation to build new universes under various starting conditions. They found that the conditions for life might be a little broader than previously thought — especially when it comes to the mysterious pull of dark energy.

Dark energy is a mysterious, invisible force thought to exist in the empty spaces of our universe. You could think about it as the archnemesis of gravity; while gravity pulls matter closer together, dark energy flings it apart — and dark energy is winning this cosmic tug-of-war handily.

Not only is our universe expanding, thanks to the constant, invisible push of dark energy, but the rate of that expansion is also getting faster and faster every day. It's thought that, as more empty space appears in the universe, even more dark energy appears to fill it. (Dark energy is not the same as dark matter, which is an abundant, invisible form of matter thought to be responsible for some very weird gravitational phenomena around space.)

Scientists don't know exactly what dark energy is or how it works; some think it's an intrinsic property of space — what Einstein called the cosmological constant — while others attribute it to a fundamental force called quintessence, with dynamic rules all its own. Others don't even agree that it exists. But whatever it is, everyone can agree that there's a whole lot of it: According to the best current estimates, nearly 70 percent of the mass-energy of our universe may be made of dark energy.

This quantity, for whatever reason, is in the right range to allow galaxies to grow and foster life. It is thought that if we lived in a universe with too much dark energy, space might expand faster than galaxies could possibly form. Too little dark energy, and runaway gravity could cause every galaxy to collapse in on itself before life ever had a chance to appear.

But the question of how much dark energy is "too much" or "too little" is a topic for debate — and it's this issue of quantity that the authors of the new studies hoped to narrow down.

Across several experiments, an international team of researchers from England, Australia and the Netherlands used a program called Evolution and Assembly of Galaxies and their Environmentsto simulate the birth, life and eventual death of various hypothetical universes. In each simulation, the researchers adjusted the amount of dark energy present in that universe, ranging from none to several hundred times the amount in our own universe.

The good news: Even in universes with 300 times as much dark energy as ours, life found a way.

"Our simulations showed that the accelerated expansion driven by dark energy has hardly any impact on the birth of stars, and hence places for life to arise," study co-author Pascal Elahi, a research fellow at the University of Western Australia, said in a statement. "Even increasing dark energy many hundreds of times might not be enough to make a dead universe."

That's good news for fans of extraterrestrial life and the multiverse theory. But a bigger question remains: If galaxies could still thrive on so much dark energy, why did our universe get handed such a seemingly small amount?

"I think we should be looking for a new law of physics to explain this strange property of our Universe," co-author Richard Bower, a professor at Durham University's Institute for Computational Cosmology, said in the statement.

Of course, finding new laws of physics is easier said than done. Scientists won't give up easily — but perhaps, to hedge their bets, they should also look for a parallel universe where some intelligent life has already done it for them.