After more than a decade of searching, scientists finally detect the element billowing out of a gas giant. 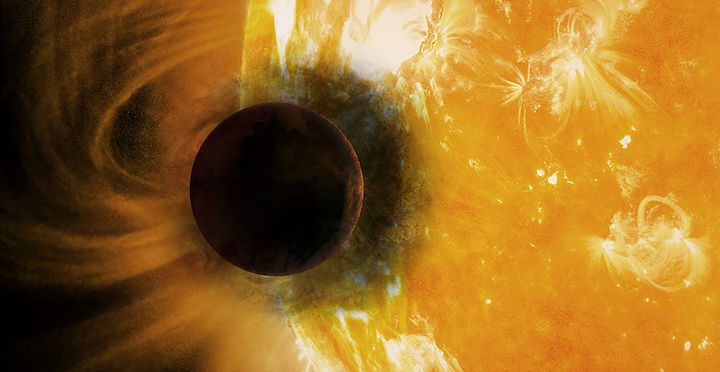 A big, puffy planet orbiting a small, bright star in the constellation Virgo is leaking helium into space. It’s the first time astronomers have spotted the element on a planet beyond the Solar System, after more than a decade of searching.

Many similar planets probably exist, so the work opens new possibilities for probing the atmospheres that enshroud distant worlds, says Jessica Spake, an exoplanet astronomer at the University of Exeter, UK. She and her colleagues describe the finding today in Nature1.

Helium is the second most abundant element in the Universe, after hydrogen. It’s also common in gas-giant planets such as Jupiter and Saturn, and theorists have predicted that it should be detectable in exoplanet atmospheres2. “It’s thrilling to be seeing helium for the first time,” says team member Laura Kreidberg, an exoplanet astronomer at Harvard University in Cambridge, Massachusetts.

The scientists stumbled on the element unexpectedly. They had been looking for methane in the atmosphere of a gas-giant planet known as WASP-107b4, about 60 parsecs from Earth. It is roughly the size of Jupiter but only one-eighth of Jupiter’s mass, making it one of the lowest-density exoplanets known. Without a lot of gravitational pull to keep its atmosphere small and compact, the planet’s gases can extend tens of thousands of kilometres into space.

Spake and her colleagues used the Hubble Space Telescope for seven hours in May 2017, capturing observations as the planet moved across the face of its star. As soon as they downloaded the data, they saw an enormous spike in the star’s light spectrum, at the near-infrared wavelength of 1.08 micrometres. Puzzled at first by which chemical element or compound it might represent, Spake eventually concluded it must be helium.

The spike is caused by a special ‘metastable’ type of helium, an energetic but long-lived state created as the star’s radiation pummels the planet’s atmosphere. In 2000, astronomers predicted5 that metastable helium should show up in certain planetary atmospheres, but a search for it — reported in 2003, — on the planet HD 209458b, came up empty6. After that, Spake says, hunting for helium “kind of went out of fashion”.

With WASP-107b, she was lucky. Helium is difficult to spot in its normal form, but WASP-107b’s combination of a puffy atmosphere and an orbit close to a bright star allows the star’s radiation to zap the helium into the metastable state, which is much easier to detect. “It was a very happy accident,” Spake says.

Because the helium signature appears at infrared wavelengths that aren’t absorbed by Earth’s atmosphere, it can be studied by ground-based telescopes as well as satellites. “This observation is going to open floodgates to a new area of exoplanet research, just because the helium signature is so strong,” says Sara Seager, an astrophysicist and planetary scientist at the Massachusetts Institute of Technology in Cambridge who was a co-author of the 2000 prediction.

WASP-107b is only the fourth exoplanet, and the first in its size class, known to have an escaping atmosphere, says Tiffany Kataria, an exoplanet astronomer at the Jet Propulsion Laboratory in Pasadena, California. The star’s radiation is so powerful that models suggest the planet’s atmosphere is actually eroding a tiny bit each year, perhaps forming a comet-like tail of helium. Studying WASP-107b and similar planets could help reveal how and why their atmospheres vanish, Kataria says. This is especially important for small exoplanets, she adds, “some of which may have had more substantial atmospheres but lost them over time”.

After all these years of waiting for her prediction to be confirmed, Seager is happy it has finally happened. “I didn’t think it would take so long,” she says.