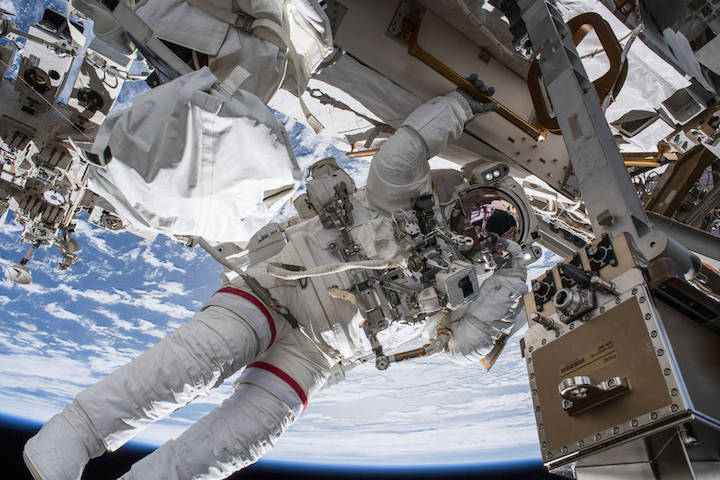 NASA astronaut Drew Feustel seemingly hangs off the International Space Station while conducting a spacewalk with fellow NASA astronaut Ricky Arnold (out of frame) on March 29, 2018. Feustel, as are all spacewalkers, was safely tethered at all times to the space station during the six-hour, ten-minute spacewalk.

Two NASA astronauts are scheduled to venture outside the International Space Stationfor a pair of six-and-a-half-hour spacewalks May 16 and 30. Experts from NASA will preview the work to be done during the spacewalks in a briefing at 2 p.m. EDT Tuesday, May 8, at NASA’s Johnson Space Center in Houston.

Live coverage of the briefing and spacewalks will air on NASA Television and the agency’s website.

Expedition 55 Flight Engineers Drew Feusteland Ricky Arnoldwill put on spacesuits for what will be the 210th and 211th spacewalks in support of station assembly, maintenance and upgrades. These spacewalks will be the eighth and ninth of Feustel’s career, and the fourth and fifth of Arnold’s. The primary objectives are to finish upgrading cooling system hardware and install new and updated communications equipment for future dockings of commercial crew spacecraft.

Media wishing to participate in the May 8 briefing in person must request credentials from the Johnson newsroom no later than 4 p.m. Monday, May 7. Media interested in participating by phone must contact the newsroom by 1:45 p.m. May 8.

Participating in the briefing are:

The first spacewalk will begin about 8:10 a.m. Wednesday, May 16. NASA TV coverage will begin at 6:30 a.m. Feustel and Arnold will move a component called a Pump Flow Control Subassembly (PFCS) from a spare parts platform on the station’s truss “backbone” to the Special Purpose Dexterous Manipulator (Dextre) robotic arm. The PFCS drives and controls the flow of ammonia through the exterior portions of the station’s cooling system. Robotics controllers on Earth will use Canadarm2 and Dextre to perform final installation on the port-side truss for checkout. The spacewalkers will remove a failed PFCS and return it to the spare parts depot. They’ll also replace a camera system on the Destiny Laboratory and a communications receiver. This also be the 50th spacewalk originating from the station’s Quest airlock. Other assembly and maintenance spacewalks have begun from space shuttle and Russian airlocks.

The second spacewalk is planned for Wednesday, May 30, but the exact timing is dependent on the anticipated May 24 arrival of the Orbital ATK Cygnus cargo resupply spacecraft. The ninth Cygnus cargo mission is scheduled to launch May 20 from NASA’s Wallops Flight Facility in Virginia.

During the May 30 spacewalk, Arnold and Feustel will install a pair of brackets and high-definition cameras on the Harmony module that will helpcommercial crewvehicles align with the international docking adapterat the forward end of Harmony. The cameras also will provide wireless data network access for experiments and facilities mounted on the ESA (European Space Agency) Columbus laboratory and Japan Aerospace Exploration Agency Kibo laboratory. The crew also will replace a camera on the station’s starboard truss.