On an April weekend, engineers, designers and astronauts-in-training met to test suits for commercial, suborbital spaceflight. 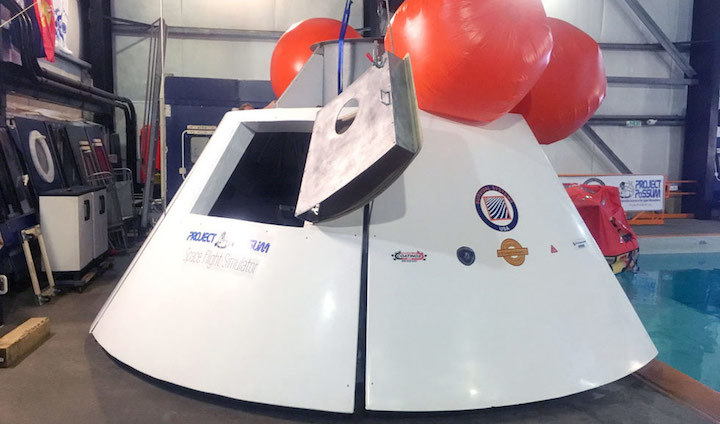 The mockup of the Orion capsule from the outside

A scientist-astronaut-in-training, Joey Corso, 17, swam in a spacesuit in the dark. Corso had just freed himself from straps mimicking a parachute harness and successfully climbed atop an inflatable raft.

The lights came on. Corso's swim, intended to mimic an emergency nighttime landing in the sea, took place in a 4-meter-deep pool inside what looked like a small aircraft hangar.

In exercises held from April 13-16, Corso and 10 other scientist-astronauts-in-training of ages 17 to 51 engaged in the first in-water tests of a spacesuit designed specifically for commercial spaceflight. The goal is to use these suits as part of a project to investigate the highest clouds in the world in the most mysterious layer of Earth's atmosphere. 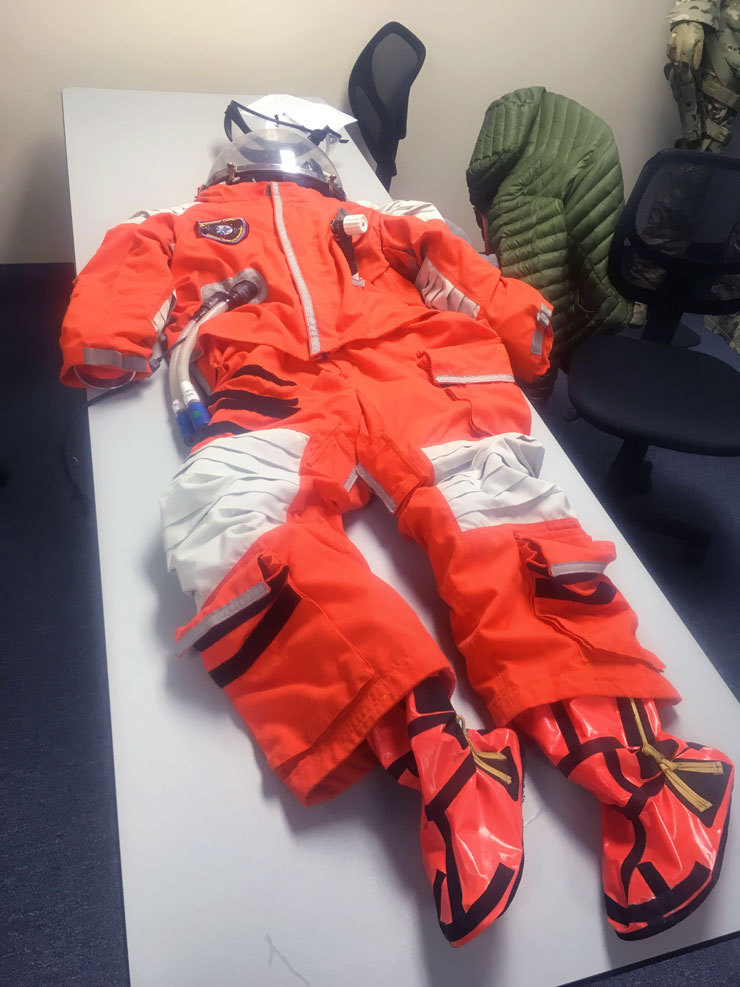 The spacesuit from Final Frontier Designs.

The spacesuits were tested by Project PoSSUM (Polar Suborbital Science in the Upper Mesosphere) at Survival Systems USA in Groton, Connecticut. PoSSUM aims to investigate the mesosphere, the atmospheric layer extending from about 50 to 85 kilometers above Earth.

Less is known about the mesosphere than any other layer of the atmosphere because it lies too low for satellites to examine directly and too high for aircraft or balloons to reach, said Jason Reimuller, PoSSUM's executive director. Scientists have used sounding rockets to sample the mesosphere directly, but such flights are brief and rare.

The advent of reusable suborbital vehicles such as Virgin Galactic's SpaceShipTwo and Blue Origin's New Shepardhas opened up a potential new way to access the mesosphere. Suborbital flights to the mesosphere in these spacecraft are roughly one-tenth the cost of a trip powered by a rocket, PoSSUM's website noted. Moreover, researchers onboard can also oversee experiments as they happen in the mesosphere.

Investigating the mesosphere "can help us understand low-density atmospheres elsewhere, such as Mars," Reimuller said. In addition, PoSSUM plans to examine noctilucent clouds, the highest clouds in Earth's atmosphere. Previous research suggests these clouds are very sensitive markers of what is happening in the upper atmosphere, especially when it comes to carbon dioxide and methane, two key greenhouse gases helping drive climate change. PoSSUM aims for researchers to perform 3-D tomography of noctilucent clouds, much like an MRI makes a 3-D model of a person.

The pool at Survival Systems USA where water tests of a new commercial spacesuit took place.

Although suborbital vehicles do not achieve orbit, they still enter space, and so onboard crews and scientists need spacesuits. PoSSUM's citizen scientist-astronauts-in-training are now testing outfits from Final Frontier Design in Brooklyn, New York. It's the first spacesuit developed outside of a government contract, said Ted Southern, the company's president.

The spacesuit, intended to be worn inside the spacecraft, is termed an intravehicular activity, or IVA, suit. "It is more mobile and lighter-weight than prior suits -- 18 pounds total," Southern said. That is about half the weight of conventional suits, he said.

In addition, comparable suits NASA "cost about $300,000 each; these cost about $125,000 each," said Erik Seedhouse, a physiologist at Embry-Riddle Aeronautical University in Daytona Beach, Florida. "They're cutting costs, not spending money unnecessarily."

Previously, Southern designed costumes for Broadway plays, Victoria's Secret and Cirque du Soleil. "I've always been interested in extending the abilities of the human body, and working in the field of space has become a part of that, from NASA's Astronaut Glove Challenge to now," he said.

Final Frontier Design has contracts for its spacesuits with four commercial spaceflight companies, including Starfighters Aerospace, which keeps Lockheed F-104 Starfighter supersonic aircraft for government and commercial customers, and Zero2Infinity, which aims to provide stratospheric balloons for access to near space and low Earth orbit. Final Frontier Design also has an agreement with NASA for access to the agency's expertise to help develop the suit for human spaceflight. The company has currently developed a medium suit adjustable to fit sizes 5 feet 2 inches to 5 feet 10 inches and a large suit for sizes 5 feet 8 inches to 6 feet 4 inches, and they anticipate developing a small suit for sizes down to 4 feet 10 inches, Southern said.

"We expect to fly in the F-104 with Starfighters this year, and to be taking the suit above the Armstrong line [the altitude of about 18 kilometers, above which blood boils at the human body's normal temperature] in 2019," Southern said. "Orbital activities are at least four to six years out."

PoSSUM has spent four years working up to water tests, with its citizen scientists undergoing training in high G-forces and in the first pressurized visor-down tests of a commercial spacesuit in microgravity. "PoSSUM citizen scientists are more than just students -- they understand that they're test subjects, that they're pioneering something," Reimuller said.

One set of tests involved a mock-up of NASA's Orion capsule placed on the water, mimicking a splashdown from orbit. The mock-up, made mostly of fiberglass and aluminum, weighs about 1 ton, and is 3 meters high and 5 meters across, based on NASA's specifications for the Orion capsule, said Chris Lundeen, PoSSUM's program coordinator, who built the mock-up.

In each of these tests, four PoSSUM researchers in spacesuits began in their seats on their backs in the capsule, and the commanders of each group of four had to decide whether to exit through the capsule's side or top hatch. Side exits are easier, but in rough waters, water can enter an open hatch in the side and sink the capsule, so top exits are required.

There are many steps in each test. In one that Lundeen participated in, they were told they landed near Mexico's Baja peninsula and the capsule's fan was broken, so they had to leave the capsule because of the heat. After lowering their visors, pressurizing their suits and disconnecting from their harnesses, they exited upward, a process involving unstowing a folding ladder and using a winch to slowly lower the 18-kilogram top hatch into a web of cables. The subjects then placed a blanket on the capsule's hull to prevent it from damaging their suits, and with peanut-shaped life preservers inflated, they held onto a rope and slid down the capsule's side into the water, before swimming to an inflatable raft they had previously tethered to the capsule, Lundeen recalled.

"It's a challenge taking a suit designed to operate in space and vacuum and put it where it's not meant to go, in the water," said Ken Trujillo, PoSSUM's astronautics training director and a former NASA astronaut instructor. 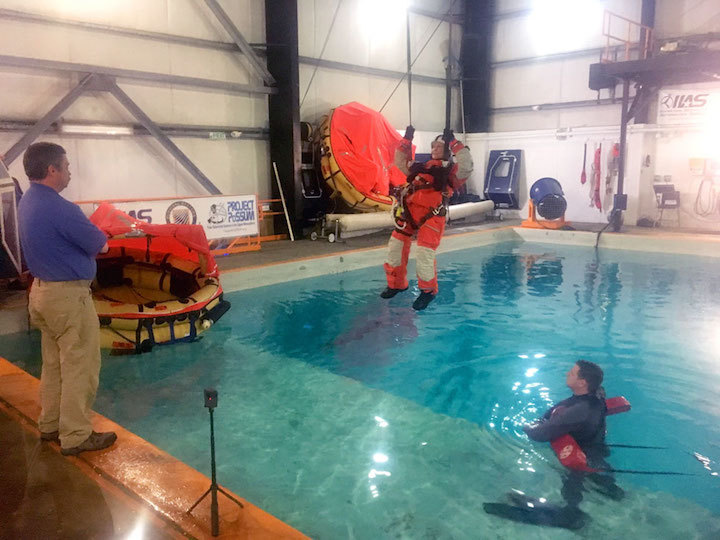 Another set of tests simulated parachute drops into water to help certify the suits for flight on an F-104, as Starfighters Aerospace's emergency scenario involves landing in the Atlantic. The life preservers inflated under each arm can make it difficult to move in the water.

Helmets are opened after landing, since each suit's air tank can only last about 5 minutes. Pulling oneself into a raft from the water can prove especially difficult, especially with the added weight of any water that has leaked into a suit from an open helmet. "It was exhausting; it was hell," said PoSSUM scientist-astronaut candidate Keith Crooker, a scientist and engineer at Bigelow Aerospace. Afterward, PoSSUM members poured the water out of each suit before the next person put it on.

PoSSUM members each often have to pull double duty. For instance, Shawna Pandya, a medical resident at the University of Saskatchewan at Prince Albert, is helping collect data on her fellow scientist-astronaut candidates during tests. "It's like Disneyland for smart people," Pandya said.

Learning from the tests

Although "it's great to see tests run well, it's also good to see things not go well," Southern said. They often have to make small fixes and adjustments to the suits on the fly. "By seeing what goes wrong and why, and how people recover, we're learning lessons," he said.

For example, these tests are teaching "how important stance is in the water -- we'll focus on techniques for folks to get their legs down," Southern said. "If the legs are floating up and your torso is down, it's not a great position to be in if your helmet is open."

In addition, the neck dams -- garments that help keep water from leaking into the suit from an open helmet -- were often difficult for people to grab and cinch tight. "We'll probably end up 3-D printing some pull tabs in the future to make them very obvious in a tactile sense," Southern said.

All these tests are not merely training. The data is expected to lead to at least three peer-reviewed studies in bioastronautics and human factors, Reimuller said.

The work on this spacesuit could have applications on Earth as well. "There are many similar challenges that all kinds of personal protective equipment face," Southern said. "Space is sexy and probably the most extreme environment, but this work could help with the kinds of garments worn by industrial workers and first responders.

"Working in space is superexciting," Southern said. "The thrill never goes away."