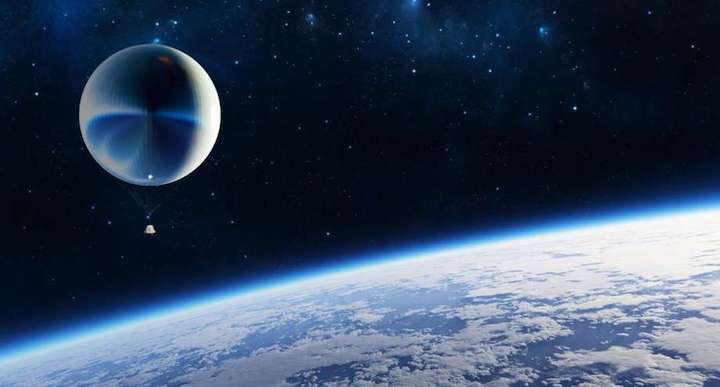 NanoRacks is bringing its space-bound cargo a little closer to home, a mere 12 miles off Earth’s surface in a high-altitude balloon.

That cargo could one day in the not-so-distant future include humans as the company, known for getting experiments and satellites aboard the International Space Station, works to open “the space frontier for everybody, whether for research or personal experience,” CEO Jeff Manber said.

Webster-based NanoRacks is partnering with a Hong Kong company, KuangChi Science, that is developing the helium-powered Traveler balloon. The craft differs from the familiar hot-air balloon with a more aerodynamic design, sturdier materials and a pressurized cabin to protect occupants from the perils of flying super high.

NanoRacks is working to help non-Chinese companies get their research, Earth-observation devices and people into near-space aboard the Traveler. The goal is to send up commercial payloads later this year and people as early as 2021.

High-altitude balloons don’t qualify as space tourism, per se, as passengers wouldn’t actually cross the threshold into space, often considered to be about 62 miles. But they would provide views of Earth’s curvature, offering a lower-cost alternative to the suborbital space flights and luxurious space hotels currently being proposed by other private entities.

“In the long run, (space tourism) will be probably the most profitable and largest industry off-world,” said John Spencer, an outer-space architect and founder of the Space Tourism Society, “because there will be so many people who want a space experience.”

For those boarding KuangChi’s high-altitude balloon, the journey would begin with a gradual two-hour rise through the clouds. The six passengers would then get an hour in near-space before a two-hour descent. The cost has yet to be determined, but an announced competitor reportedly has plans to sell seats for roughly $75,000.

Before people board the Traveler balloon, KuangChi Science wants to prove its technology and create a market for unmanned commercial payloads that could spend more than a week in the sky, said Sam Chester, international portfolio manager for KuangChi Science, who works in the company’s office in Israel.

Near-space provides a closer vantage point for organizations seeking to observe the planet and collect data on crops, ocean pollution or growth in the suburbs. A network of Traveler balloons in the stratosphere could also provide Wi-Fi and telecommunications for remote areas or following an environmental disaster.

Manber said the project could benefit companies interested in the International Space Station. Customers can test hardware on the balloon to ensure it can be controlled from a distance, survive harsh environments and withstand vibrations. It’s not uncommon for payloads to reach the space station with malfunctioning hardware.

“The opportunity to be involved in a platform that’s near space is a stepping stone for us and our customers,” Manber said.

The high-altitude balloon is just one of many recent announcements from the local company. NanoRacks is designing and building a roughly $12 million airlock to increase the number of satellites that can be deployed from the space station. It announced the completion of its engineering design phase last week, meaning the company is transitioning to the fabrication phase.

Connections like these helped make NanoRacks an attractive business partner for KuangChi Science, Chester said. So did its track record in commercial space.

“Bringing that spirit into the Traveler program … that was really exciting for us,” he said.

KuangChi Science began developing the Traveler program in 2012. There will be a launch site in China, and NanoRacks is working to find other countries where the Traveler could take flight.

KuangChi’s first test flight was in 2015, and the company has had successful tests each year since. The most recent flight in October carried extra-special cargo: a small turtle in a square-shaped container, 10 cubic centimeters in size. It was pressurized and had oxygen, essentially a mini-version of what will one day take humans to near space.

Turtles represent wisdom, innovation, stubbornness and nature in Chinese culture, Chester said. But the company chose the reptile for another reason, too.

“The turtle is very resilient,” he said. “Can live in the water, can survive on very limited oxygen. Looking for an animal that would work for a first test, it’s a sturdy and rugged choice.”

The turtle survived the journey, giving hope for the less-rugged humans.