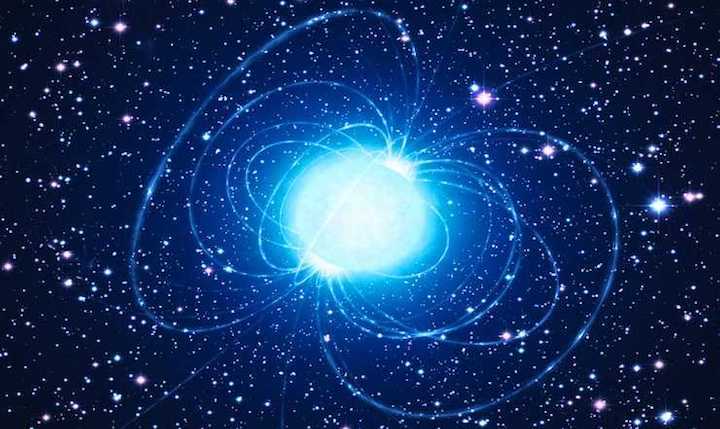 Young scientists from ITMO University have explained how neutron stars generate intense directed radio emission. They developed a model based on the transitions of particles between gravitational states, i.e. quantum states in gravitational field. The researchers were the first to describe such states for electrons on the surface of neutron stars. Physical parameters obtained with the developed model are consistent with real experimental observations. The results are published in The Astrophysical Journal.

Neutron stars are some of the most amazing astronomical objects as their density is second only to black holes. Inside neutron stars, there are no individual atoms and nuclei. Moreover, due to such a high density, neutron stars have tremendous gravity, which results in unique physical properties such as directed radio emission, which played a major part in neutron stars discovery.

On Earth, the radiation from neutron stars was first observed in 1967 in the form of periodic signals, initially causing scientists to suggest that it may have come from an extraterrestrial civilization. However, researchers soon learned that the radiation of neutron stars was natural in origin and did not carry any special information. Its strict periodicity turned out to be the result of an unusual propagation path. Neutron stars emit radio waves as a narrow beam that "shines" through space like a beacon while the star is rotating. Therefore, the radio emission of neutron stars is observed as periodic pulsations.

One of the most puzzling questions in the physics of neutron stars is the mechanism that generates such directed radio emission. Over the past fifty years, scientists could not find a clear answer to this question. Recently, a team of theoretical physicists from ITMO University described how pulsars generate radio emission. They developed a theoretical model based on the similar states observed in electrons in semiconductor nanocrystals and those in gravitational fields.

"Environment on the surface of a neutron star is very similar to the one that exists within a laser", explains Nikita Teplyakov, researcher at the Laboratory of Modeling and Design of Nanostructures at ITMO University. "There exists the so-called population inversion, meaning that the environment is rich with high-energy particles. As they move to the lower energy levels, they emit radiation that causes nearby particles to reduce their energy as well. We evaluated the frequency of electron transitions between gravitational conditions on a neutron star and saw that they correspond to the radio band. We never even suspected that this was something no one had done before, but it turned out that we were, indeed, the first."

According to the researchers, this study began in a quantum mechanics class as they worked on a task. "The task was pretty trivial: we had to describe the gravitational state on the surface of Earth. But on Earth, gravity is not very strong, so no interesting effects emerge; it is almost impossible to observe gravity conditions here. Therefore our professor Yuri Rozhdestvensky suggested we do the same task for a neutron star with a strong gravity. When we realized that we stumbled upon something interesting, we began developing a model. It turned out that we obtained a quite accurate description of the experimental data", says Tatiana Vovk, a member of the Laboratory of Modeling and Design of Nanostructures.

Authors note that despite its revelations, this work employs simple and well-known principles of physics. Namely, the radio emission amplification mechanism for neutron stars is similar to one of the conventional lasers. In the future, scientists plan to use their model for a study of gravitation states of other massive objects in the Universe.

Quelle: The American Association for the Advancement of Science (AAAS)