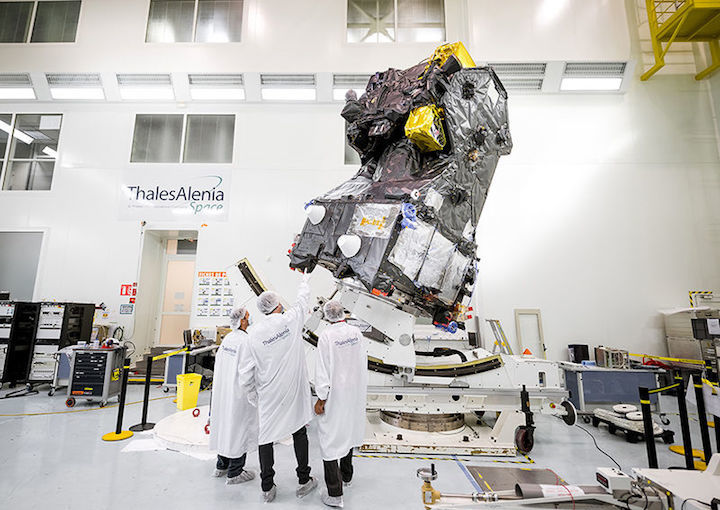 The Trace Gas Orbiter in a clean room before its launch in 2016. Credit: Thales Alenia Space/ESA

For more than a year, a 3.5-tonne spacecraft has been circling Mars in a series of erratic loops. Now, after 1,000 circuits, the Trace Gas Orbiter (TGO) has reached the ideal position to study the planet’s atmosphere, and has made its first scientific observations. It is poised to solve one of the most controversial mysteries in Martian science: why methane, a possible signature of life, is being released on the red planet.

The TGO is part of the ExoMars mission, a joint venture between the European Space Agency (ESA) and the Russian space agency Roscosmos. The orbiter, which launched in March 2016and reached the planet that October, is the first craft specifically designed to study gases that make up less than 1% of the planet’s cold, arid atmosphere, including methane, water vapour and ozone. The TGO reached its planned circular orbit earlier this month, and underwent a series of engineering tests before starting to take scientific data on 21 April.

The Martian atmosphere is almost entirely carbon dioxide, but researchers are particularly interested in its other components — especially methane. These trace gases could be signals of biological or geological activity, and they provide clues to the planet’s climatic history.

Scientists have been catching hints of methane in the Martian atmosphere for 15 years using Earth-based telescopes, Mars orbiters and NASA’s Curiosity rover. As evidence of the gas has accumulated, the debate over its origin has intensified. “Nearly 95% of all the methane in the Earth’s atmosphere originated from current and past biology,” says Sushil Atreya, a planetary scientist at the University of Michigan in Ann Arbor. “So, it is natural to ask whether methane on Mars is also of biologic origin.”

The gas’s presence on Mars has surprised researchers, because chemical reactions in the atmosphere should destroy any methane molecules there within a few centuries. A measurable methane level suggests that an active source must be replenishing the gas.

Curiosity now routinely detects a background level averaging 0.5 parts per billion (p.p.b.) of methane in the atmosphere (by contrast, Earth’s level is about 1,875 p.p.b.). But the Martian concentration changes unexpectedly over time, says Atreya. Observations have also suggested the presence of large plumes with concentrations of 45 p.p.b., and Curiosity has detected burps of around 7 p.p.b. that dissipate quickly. “We didn’t expect methane to be on Mars, and it shouldn’t be variable unless there is an active source and a vigorous sink,” says Bethany Ehlmann, a planetary scientist at the California Institute of Technology in Pasadena.

Researchers have suggested several possible sources. The peaks might come from subsurface chemical reactions between rocks and water, carbon-rich meteorites that enter the atmosphere, or from sudden releases from reservoirs beneath Mars’ surface. Most thrilling of all, the peaks could have a biological origin. “It’s really a mystery,” says Ehlmann.

The TGO carries four major scientific instruments that will collect data to create global maps of the trace gases, showing in unprecedented detail how their presence varies around the planet and over time.

The orbiter’s main spectrometer, NOMAD, operates in the infrared, ultraviolet and visible parts of the electromagnetic spectrum. It will be able to look down from the craft’s orbital altitude through the atmosphere to the surface, a distance of about 400 kilometres. And twice per orbit, when the TGO is on the boundary between Mars’s light and dark sides, NOMAD will be able to peer through the planet’s atmosphere and look towards the Sun. This position increases sensitivity by allowing the probe to look through a much bigger segment of atmosphere — “up to 30 times higher than looking down at the surface”, says Michael Mumma, a planetary scientist at NASA’s Goddard Space Flight Center in Greenbelt, Maryland, who is a co-investigator on NOMAD. Researchers should be able to use the data it collects to identify the spectral signatures of various gases, which absorb light at different wavelengths. 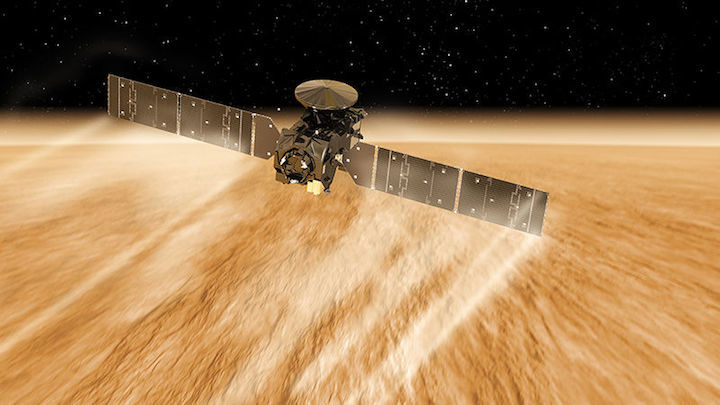 The Trace Gas Orbiter is taking measurements of gases present in small quantities in the Martian atmosphere. Credit: ESA/ATG medialab

The craft’s colour camera, CaSSIS, will build detailed 3D maps of the planet’s terrain. And if other instruments pinpoint a spike in methane concentration, researchers will be able to look through CaSSIS’s archive for images taken at roughly the same time, to try to identify possible sources on the Martian surface. “We’re looking for things like an impact crater or a rock slide or landfall, or a big crack in the ground — that would be really nice,” says Manish Patel, a planetary scientist at the Open University in Milton Keynes, UK, who works on NOMAD and CaSSIS.

And data on how ratios of hydrogen and its heavier cousin, deuterium, vary in water by altitude and season will be crucial for understanding the history of water on Mars, says Ehlmann. Mumma hopes that this information will help to illuminate what might have happened to a hypothesized ancient water ocean on Mars — for instance, whether the water evaporated and escaped from the atmosphere.

The next major step, says Patel, is to find out whether the instruments’ sensitivity is as hoped. The TGO is designed to detect trace-gas concentrations down to at least 1 p.p.b. and methane down to 0.02 p.p.b., says Håkan Svedhem, ESA’s ExoMars TGO project scientist at the European Space Research and Technology Centre in Noordwijk, the Netherlands. But the sensitivity, which the team should know within the next month, will ultimately depend on factors such as temperature and dust levels in the atmosphere. “It’s a very nerve-wracking time for the team — it’s the culmination of eight or nine years’ work,” says Patel. ESA plans to run the TGO’s science missions until the end of 2020, and the craft will then act as a data-relay station for the agency’s planned ExoMars rover, which should arrive in 2021.

In the first few months, Patel expects to be able to map out levels of methane and start providing the clues that researchers have craved. “The debate over all of this that’s been going on for over a decade — it should answer that question,” he says.