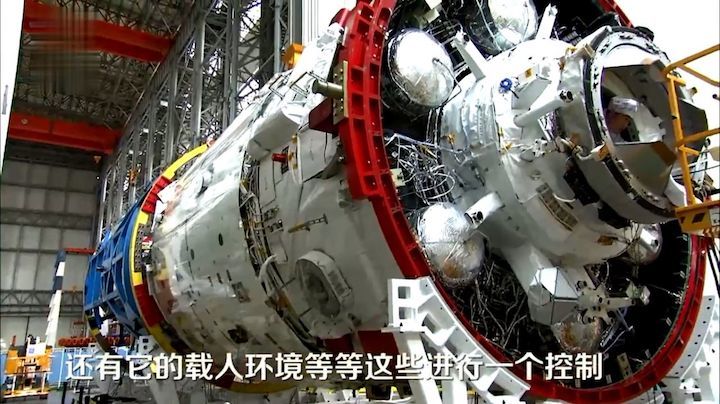 A view of the Tianhe core module of the Chinese Space Station, showing the outside of the astronaut habitat section. CCTV/Framegrab

China's astronauts are stepping up training in preparation for the establishment of a modular Chinese Space Station, with construction to begin in low Earth orbit around 2020.

China began its human spaceflight programme in 1992 and sent its first astronaut into space in 2003. After launching Tiangong space labs in 2011 in 2016, the country is preparing the launch of the first component of the Chinese Space Station, the Tianhe core module.

"The human space programme has entered the space station era, which means that the astronauts will stay in space for a longer time with more tasks to be performed," Chen Dong, who flew to space on the Shenzhou-11 mission in 2016, told CGTN earlier this month on the sidelines of the Boao Forum for Asia.

"This has set higher requirements for our physical condition, knowledge, mental status and skills, and brought more challenges."

"For example, during the Shenzhou-11 mission, we spent 33 days in space. We may stay three months, or even half a year in our follow-on missions, with more extra-vehicular activities to assemble and maintain the space station. So with so many new situations and new changes, we have also improved our current training."

Intense training and tests for astronauts in China.

In the summer 2017 China also carried out joint sea survival training with two European Space Agency (ESA) astronauts off the coast of Shandong Province as part of preparations.

A third round of Chinese astronauts will be selected this year, following drafts in 1998 and 2009, and will for the first time include scientists and engineers, as well as air force pilots, which made up the first rounds.

The astronaut's space station training will be put to practical use once the Tianhe core module is launched. This will take place around 2020, once the required Long March 5B launch vehicle has had a successful test flight.

A Tianzhou cargo vessel will be launched to supply and fuel Tianhe once in low Earth orbit, followed by the visit of the Shenzhou-12 crewed spacecraft. The missions have been delayed by the failure of the second Long March 5 in July 2017.

The module, which in appearance resembles the International Space Station's Russian Zvezda Service Module, is the first of three 20 metric tonne modules which will make up the CSS.

It contains the astronaut living quarters and the main control hub of the station, including attitude, and will join with a connection hub to allow docking with the other modules and visiting spacecraft.

Tianhe, which means 'harmony of the heavens' and was completed in the first half of 2017, was developed by the China Academy of Space Technology (CAST), a subsidiary of the country's main space contractor, the China Aerospace Science and Technology Group (CASC).

Two experiment modules named 'Wentian' and 'Mengtian' will join with Tianhe to form the CSS.

The two science modules will feature experiment racks focusing on the areas of space life sciences and biotechnology, microgravity fluid physics and combustion, material science in space, fundamental physics in microgravity and other multi-purpose uses.

The CSS, featuring two 30-metre solar panels and two robotic arms for construction, repair and docking, will also be joined by a free-flying space telescope with a two-metre mirror, dubbed 'China's Hubble'.

The Xuntian module is expected to provide a level of resolution no less than the famous Hubble space telescope, but with a field of view 300 times larger.