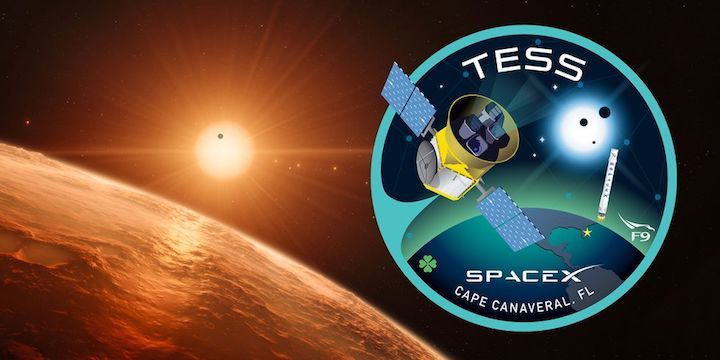 The next phase of the hunt for new worlds lifted off the pad at Cape Canaveral today, flying on a SpaceX Falcon 9 rocket. NASA's newest planet-hunter, the TESS space telescope, will observe roughly 85 percent of the sky to find planets orbiting bright, nearby stars. The Transiting Exoplanet Survey Satellite hopes to find another pale blue dot—a world to join Earth on the short list of known habitable worlds.

"I have been blessed to have been a professional astronomer during the period of time that started with—'well there probably are planets around other stars, but boy, they're just too hard to find and we'll never know'—to where we are today, which is we know there are planets around almost every star," says Paul Hertz, the Director of the Astrophysics Division at NASA. "In just 25 years, this field of science has gone from theoretical to very, very applied and very, very data-driven."

NASA's new space telescope, with four wide-angle cameras built at MIT, is about to radically expand the catalog of planets around other stars. Currently, we know of almost 3,800 extrasolar planets, or exoplanets, primarily discovered by the Kepler space telescope. TESS is expected to spot thousands more during its initial two-year survey. If the planet-hunting mission receives an extension—and a three-year one is already on the drawing board—it could find perhaps 20,000 undiscovered exoplanets before the scope's lights go out.

About 300 of those planets will likely be rocky and about the size of Earth or twice as big, but some new worlds will be like nothing we have ever seen. "The weird planets that we've found—the diamond planet, the raining rubies planet, the molten lava surface planet, the water world—these are all ones of a kind," says Hertz. "We don't have enough characterized planets to understand what the families are, and so we certainly can't expect [what TESS will find]." 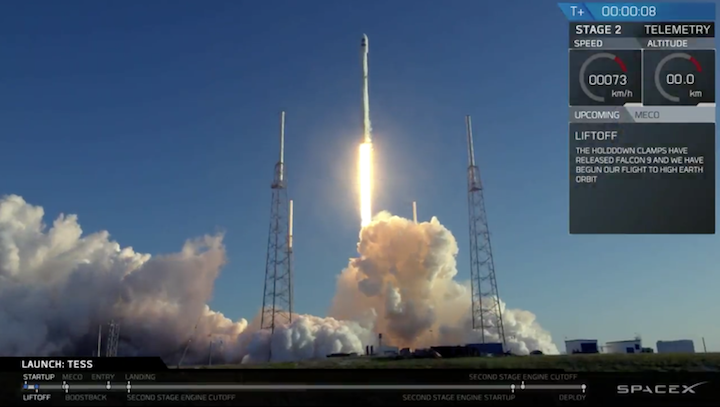 Liftoff of the TESS mission.
SPACEX

What we do know, however, is that TESS will discover exoplanets that are among the closest to Earth, within about 300 light-years. These worlds, around some of the brightest stars in the sky, will be perfect targets to study in more detail during follow-up observations. TESS is designed to catalog new planets, but it will fall to other telescopes to measure their atmospheres and look for conspicuously missing wavelengths of starlight that indicate the presence of specific chemical gases absorbing the light.

If we find a planet that's the same size and mass as Earth—one with high levels of oxygen in the atmosphere as well as a bit of water vapor, carbon dioxide and methane mixed in—it will be a very tantalizing world indeed.

The vast majority of planets that TESS will find are ones that orbit small, red stars known as M-dwarfs. Planets orbiting red dwarf stars whip around their parents in just about 10 to 14 days, giving TESS plenty of chances to catch the dip in light from a transit of the planet across the face of its star—the way the telescope spots planets beyond the solar system. 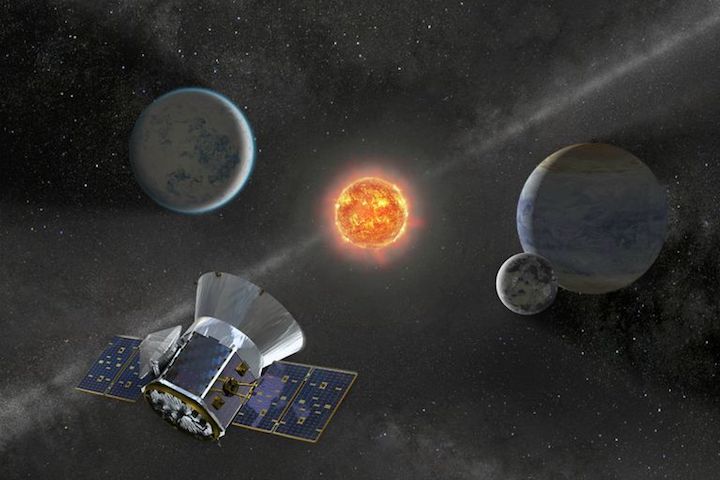 Whether or not life could exist on a planet orbiting an M-dwarf is a matter of debate. These stars are highly active, frequently showering their planets in radiation from flares and stellar ejections that could strip away the worlds' protective atmospheres. However, astronomers are quick to warn against discounting the possibility of life clinging to worlds around M-dwarfs.

"It's since we started building TESS that the conversation [started] about whether M-dwarfs are too active to have habitable planets—that's a brand new conversation," says Hertz. "And you know, the conversations are going so fast in the exoplanet science community that I wouldn't assume what we think today is what we'll assume in five or ten years."

At a press conference on Sunday, George Ricker, principal investigator of the TESS mission, expressed a similar thought. "If we've learned anything from opening up new windows in astronomy, it's [that] our imagination is less comprehensive in terms of covering all the possibilities than nature," he said. "Never underestimate how ingenious nature actually is."

To find out if life could exist on one of the thousands of planets that TESS will find around M-dwarfs, or on any other exoplanet for that matter, astronomers will have their work cut out for them. Studies of atmospheric composition conducted by the upcoming James Webb Space Telescope and future ground-based telescopes, like the Giant Magellan Telescope (GMT) and the Extremely Large Telescope (ELT), could provide some intriguing clues—but not a smoking gun.

Direct imaging of these worlds will help us learn even more about what they are like, snagging a photo of the point of light reflected off an exoplanet separate from the direct light of its star. "It's very hard because they're very close together, and the star is a billion times brighter," says Hertz. "[But] there's two ways that we know of doing it."

The first is a coronagraph, or a camera with an internal occulter to block the direct light of the star, allowing the light from the planet to enter the instrument. These devices exist, on the Gemini telescopes in Hawaii and Chile, for example, but they are only accurate enough to image a large planet that is far away from its host star—something similar to Neptune. A demonstration coronagraph is also planned for the WFIRST space telescope scheduled to launch in the 2020s, one that could image planets about "Jupiter's distance away from the star," says Hertz.

The goal, however, is to refine direct imaging techniques so that Earth-like planets, in the cosy habitable zones of their planets, can be imaged as well. For that, some new technology might be required: a starshade.

"A starshade sounds like science fiction; it's really cool," says Hertz. "So, you have your space telescope… and you fly an occulter about 10,000 kilometers in front of the telescope. The occulter is in line with the telescope and the star, and it blocks out the light from the star. But the planet is slightly off axis, and in fact, if you design it right and do the geometry right, the planet light passes around the edge of the occulter."

Such an instrument, which is essentially a 10,000-kilometer long coronagraph in space, does not yet exist. However, scientists at NASA's Jet Propulsion Laboratory are testing the technology, building a scaled demonstrator to test on a light source placed about two miles away. In the coming years, a real starshade could fly into orbit to star filtering out the light from plants.

"The starshade is about 40 meters across, it has to have the right shape so you don't get diffraction patterns around the edge, and you have to do this formation flying when things are 10,000 kilometers apart," says Hertz. "So, just a few small technical details, but that's the type of thing we are studying as a potential future mission."

A starshade could help refine composition studies of nearby exoplanets, but to truly find out if a distant world has life, we might have to fly there and to see.

Fly Me to the Stars

Astrophyscists generally agree that small interstellar probes—not much more than a smartphone-sized camera and a few basic electronics on a mini-computer chip—could feasibly be sent to distant worlds using a light sail and laser propulsion to accelerate the probe to relativistic speeds.

"They're clearly not feasible with current state of knowledge of technology, but do they seem inevitable? Well, yeah," says Hertz. "It's just innovation, invention, [and] engineering. There's nothing impossible. There's nothing against the laws of physics about getting things small enough and then using some sort of advanced propulsion, whether its laser or otherwise, and then waiting for the probe to get there and the signal to get back—I do think it's inevitable."

How long it will be until we can achieve this technology, Hertz says, is a more difficult question. "I would not hazard a guess as to whether we're talking about decades or centuries. I think one is always surprised at how fast technology can move, and if one makes a guess, one is almost always too conservative."

We might not live to see it, but when a little nano-probe finally arrives at the first exoplanet, and our descendants receive the signal after a decades-long transmission at the speed of light, there is a high probability that the world will be one that was discovered by TESS.

Quelle: PM
Astronomie - The Number of Known Alien Worlds Is About to Increase By as Much as 400 Percent
« Zum vorherigen Eintrag Zum nächsten Eintrag »
1403 Views
Created with page4