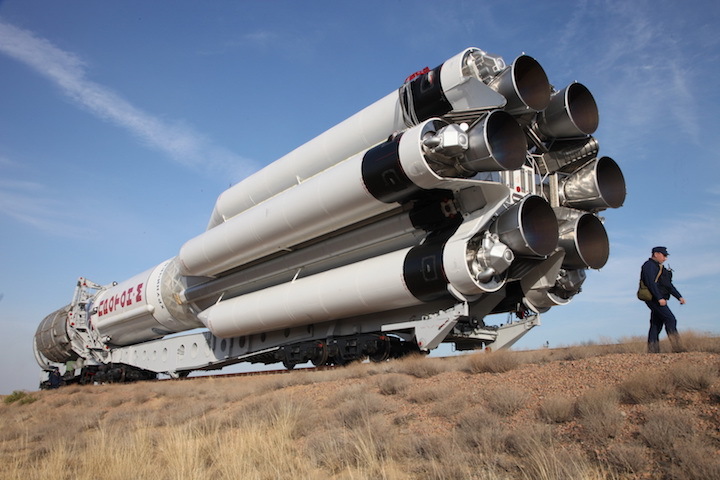 A proton-M carries rocket with a Russian military satellite has been blasted off from the Baikonur space center in Kazakhstan, the press service of the Russian defense ministry said on Thursday.

"The Proton-M heavy carrier rocket with a military satellite has been launched from the Baikonur space center," the press service said.

"The launch was carried out in a routine mode. The rocket was launched at 01:12 a.m. Moscow time," the ministry said.

The Briz-M upper stage has separated from the third stage of the Proton-M carrier rocket.

"At 01:22 a.m. Moscow time, the Proton-M reentry cone comprised of the Briz-M upper stage and a satellites launched in the interests of the Russian defense ministry separated from the third stage of the carrier rocked in a routine mode," the ministry said, adding that the satellite will be put in the designated orbit within hours.

The Proton-M carrier rocket was successfully launched from Baikonur at 01:12 a.m. Moscow time.

CEO of Reshetnev Information Satellite Systems (the satellite’s developer) Nikolai Testoyedov told TASS earlier that the Russian military satellite Blagovest was planned for launch from the Baikonur spaceport on April 19.

The launch of a Proton-M carrier rocket with the second Blagovest military communications satellite was initially planned for December 25 and was later rescheduled for mid-February 2018 over problems with one of the satellite’s devices.

The first Blagovest satellite was launched from the Baikonur spaceport on August 17, 2017. Russia’s Space Forces assigned the index number Kosmos-2520 to the satellite.

Russia’s Defense Ministry plans to deploy a grouping of four Blagovest satellites by 2020. The third and the fourth satellites will be ready for their delivery into orbit in 2018. The satellites are designed to provide high-speed access to the Internet, transmit data and offer telephone and video conference communications using the advanced Ka-and Ku-band frequencies.