Photo provided by Hillary Sanctuary of EPFL shows a thin slice of the meteorite sample from a meteorite that fell to Earth more than a decade ago providing compelling evidence of a lost planet that once roamed our solar system, according to a study published Tuesday. (Hillary Sanctuary/EPFL via AP)

Fragments of a meteorite that fell to Earth about a decade ago provide compelling evidence of a lost planet that once roamed our solar system, according to a study published Tuesday.

Researchers from Switzerland, France and Germany examined diamonds found inside the Almahata Sitta meteorite and concluded they were most likely formed by a proto-planet at least 4.55 billion years ago.

The diamonds in the meteorite, which crashed in Sudan's Nubian Desert in October 2008, have tiny crystals inside them that would have required great pressure to form, said one of the study's co-authors, Philippe Gillet.

"We demonstrate that these large diamonds cannot be the result of a shock but rather of growth that has taken place within a planet," he told The Associated Press in a telephone interview from Switzerland.

Gillet, a planetary scientist at the Federal Institute of Technology in Lausanne, said researchers calculated a pressure of 200,000 bar (2.9 million psi) would be needed to form such diamonds, suggesting the mystery planet was as least as big as Mercury, possibly even Mars.

Scientists have long theorized that the early solar system once contained many more planets — some of which were likely little more than a mass of molten magma. One of these embryo planets — dubbed Theia — is believed to have slammed into a young Earth, ejecting a large amount of debris that later formed the moon.

"What we're claiming here," said Gillet, "is that we have in our hands a remnant of this first generation of planets that are missing today because they were destroyed or incorporated in a bigger planet."

Addi Bischoff, a meteorite expert at the University of Muenster, Germany, said the methods used for the study were sound and the conclusion was plausible. But further evidence of sustained high pressure would be expected to be found in the minerals surrounding the diamonds, he said.

Bischoff wasn't involved in the study, which was published in the journal Nature Communications.

Diamonds in Sudan meteorite 'are remnants of lost planet' 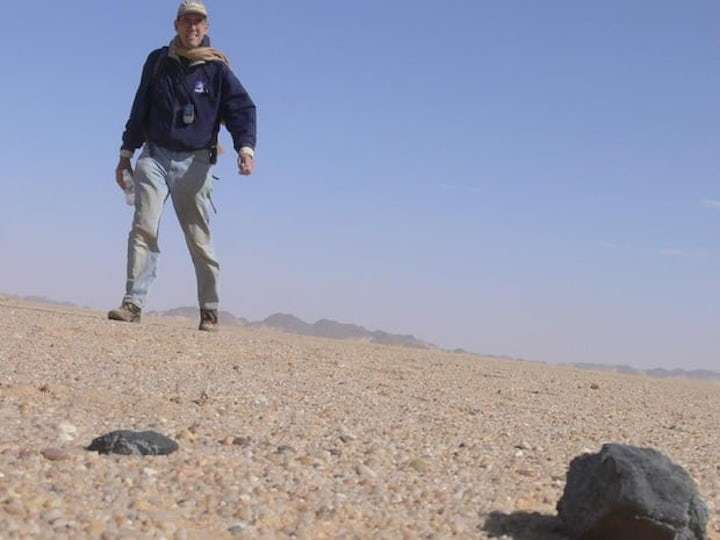 Peter Jenniskens, an astronomer, with a piece of the Almahata Sitta meteorite in 2008. Photograph: NASA

Diamonds found in a meteorite that exploded over the Nubian desert in Sudan a decade ago were formed deep inside a “lost planet” that once circled the sun in the early solar system, scientists say.

Microscopic analyses of the meteorite’s tiny diamonds revealed they contain compounds that are produced under intense pressure, suggesting the diamonds formed far beneath the surface of a planet.

In this case, the mysterious world was calculated to be somewhere between Mercury and Mars in size.

Astronomers have long hypothesised that dozens of fledgling planets, ranging in size from the moon to Mars, formed in the first 10m years of the solar system and were broken apart and repackaged in violent collisions that ultimately created the terrestrial planets that orbit the sun today.

If the latest findings are confirmed, the Almahata Sitta meteorite will be the only known remnants of one of these long-lost planets. The material will give scientists a unique window into the cosmic conditions that prevailed in the deep history of the solar system.

“Simulations have suggested that the early solar system had tens of these embryonic planets that collided with each other to form the terrestrial planets, but having evidence of one of them? I wasn’t expecting that,” said Farhang Nabiei, who studied pieces of the meteorite at the Federal Institute of Technology in Lausanne, Switzerland.

Philippe Gillet, a senior author on the study, said: “We are doing archaeology, looking into the past, and trying to decipher the story of the solar system.”

The Almahata Sitta meteorite was the first to be tracked by telescopes as it sped towards Earth and exploded over the Nubian desert in 2008. The event prompted a recovery effort by the University of Khartoum, which gathered 480 pieces of the meteorite amounting to 4kg of battered material.

Early inspections of the meteorite revealed it to be a ureilite, an unusual composition that does not match other space rocks known to have come from the moon or Mars. The finding led some scientists to speculate that it may have had a more exotic origin.

That suspicion grew when researchers noticed little diamonds in the meteorite material. While other meteorites are known to contain diamond crystals, they are generally far smaller. Typical meteorite diamonds are only a few millionths of a millimetre across and are thought to form in collisions with other space rocks that send brief but intense shockwaves through the carbon-rich asteroids.

In 2015, researchers at the Swiss lab teamed up with Japanese scientists to argue that the diamonds in the Almahata Sitta meteorite, which are up to 100 micrometres long, were much larger than could be formed in collisions with other asteroids. They speculated at the time that the meteorite might have come from a lost planet, but sought more evidence to bolster their theory.

Writing in the journal Nature Communications, the Swiss team now describe fresh analyses that show that diamonds in the meteorite contain specks of an iron-sulphur compound that is thought only to form at pressures greater than 20 gigapascals. They conclude that the diamonds formed with the specks inside them, deep beneath the surface of an unknown world.

“We are probably looking at an object that was one of the first planets to circle the sun before they collided with each other to create the actual planets we have today,” said Gillet.

James Wittke, who runs the meteorite laboratory at Northern Arizona University, said the scientists’ conclusions were reasonable. “We think that there were probably many larger ‘parent’ bodies in the early solar system, which have since been destroyed, so a since-destroyed body the size of Mercury is reasonable,” he said. “One as large as Mars seems a little surprising, but this paper presents the best, and perhaps only, type of evidence for determining the sizes of these parent bodies.”