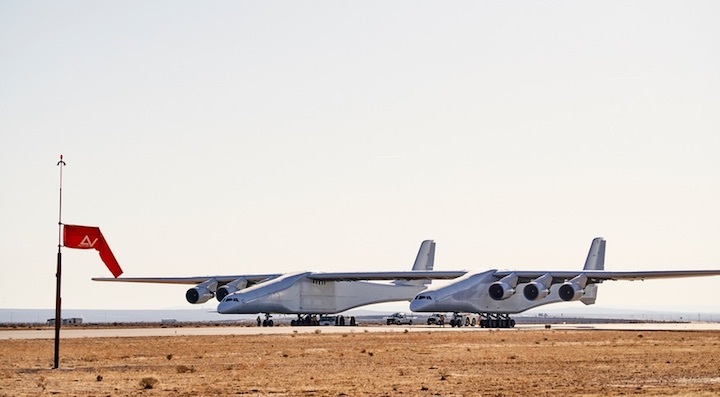 Stratolaunch's aircraft prepares for taxi tests at the Mojave Air and Space Port in California in February. The company expects the plane to be ready for its first flight this summer after three more taxi tests. Credit: Stratolaunch Systems Corp.

COLORADO SPRINGS — Stratolaunch expects to conduct the first flight of its giant aircraft this summer as it develops a broad spectrum of launch services that will make use of it, the company said April 16.

Stratolaunch has performed two taxi tests of the aircraft at the Mojave Air and Space Port in California so far, most recently in late February. Three more taxi tests of the vehicle are planned according to company officials, speaking on background during the 34th Space Symposium here.

If those tests are successful, Stratolaunch expects to be ready for a first flight of the aircraft some time this summer. Officials said they are not being more precise about the date of that flight because of the uncertainties of flight testing compounded by the one-of-a-kind nature of this airplane.

Stratolaunch officials are confident, though, based on the progress during the previous test flights. The previous test was “highly successful,” the company said, and required no modification to the plane. The plane will be “flight ready” during the upcoming series of tests, with no additional changes expected before first flight.

While the plane’s first flight may take place this summer, the first launch using the plane is still some time in the future. Stratolaunch says the plane will first have to go through an airworthiness process by the Federal Aviation Administration, which could take 18 to 24 months.

Stratolaunch, after years of changes in the type of vehicle it would fly, is currently planning to initially use the Pegasus XL rocket from Orbital ATK. Flights will start with the plane carrying a single Pegasus rocket, but the company is still studying the ability to fly three rockets on a single flight, something it says is of particular interest to the national security community as a responsive launch capability.

Stratolaunch believes Pegasus is a particularly good choice for an initial vehicle since it was designed for air launch. The company plans to use a pylon like that used on Orbital AKT’s L-1011 aircraft currently used for Pegasus launches, so that the rocket requires no modifications to launch from Stratolaunch’s plane.

However, the company is making clear it has other uses for that aircraft than launching the Pegasus. Last September, the company signed a Space Act Agreement with NASA’s Stennis Space Center “to support propulsion, vehicle, and ground support system development and testing activities,” according to the agreement. That included use of an engine test stand at the center.

“I can confirm we’re working at Stennis Space Center on a project that is still in an early stage,” a company spokesman said in November about the agreement to do testing at Stennis. “As we’ve said in the past, we’re exploring a number of launch system possibilities to provide reliable access to space.”

In the recent book The Space Barons, Stratolaunch founder Paul Allen, the billionaire co-founder of Microsoft, said the company was studying a concept called Black Ice: a reusable spaceplane that would launch from the aircraft and with the option to be human-rated. Company officials at the conference confirmed that the Black Ice concept is still under study but offered few details about it.

Those officials suggested there were other launch capabilities under consideration that would fall between Pegasus and Black Ice. Stratolaunch plans to release more details about that “spectrum of services” in the next several months leading up to the plane’s first flight.