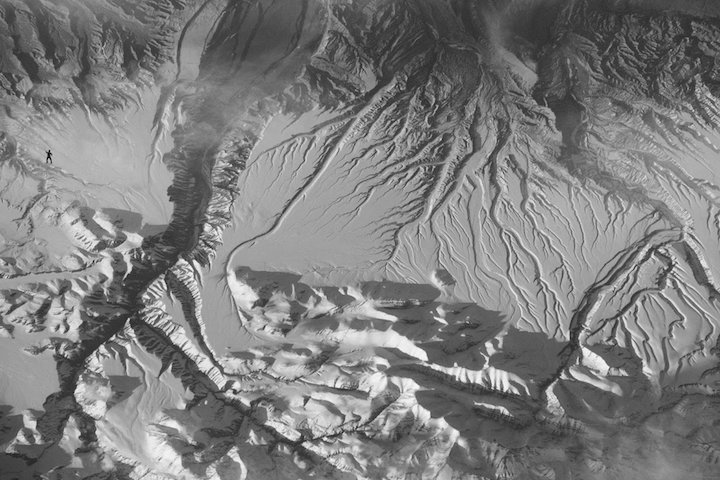 See anything unusual in this aerial image?

What do you get when you combine a classic psychology experiment with the search for extraterrestrial intelligence?

A gorilla on Mars.

OK, that one's not going to kill on the comedy circuit. Here's what's going on: Researchers from the University of Cádiz in Spain found that most people who were asked to look for signs of human-made structures on alien terrain completely missed a little, waving gorilla figure inserted into one of the images.

The findings, reported in the journal Acta Astronautica on Tuesday (April 10), reveal the limitations of the search for extraterrestrial intelligence, or ETI: Humans are tied up in their own biases and attentional limitations and might miss alien intelligence even if it's staring us in the face, the researchers said. [Greetings, Earthlings! 8 Ways Aliens Could Contact Us]

"We think [of] ETI as another form of humans, but much more advanced," study leader Gabriel G. De la Torre, a neuropsychologist at the University of Cádiz, told Live Science in an email. "We try to understand the world as [if] it was done to fit our beliefs, framework and senses. [In] reality, [it] could be much more different."

The limits of imagination

The limits of human imagination do likely constrain the search for extraterrestrial life, said Seth Shostak, the senior astronomer at the SETI Institute, which uses radio and optical observations to hunt for brainy extraterrestrials. But that observation is "not exactly a call to action," he said. 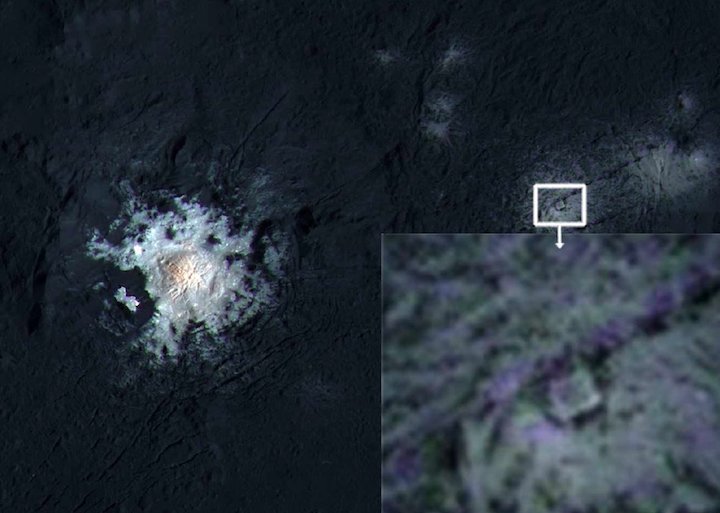 Inside the Occator crater of the dwarf planet Ceres appears a strange structure that looks like a square inside a triangle.

"I do get emails that say, 'Oh, well, you guys are just not being broad-minded enough," Shostak said. "That's a pretty easy thing to say, but it doesn't advance the search much."

In the new paper, De la Torre and his co-author, Manuel Garcia at the University of Cádiz, argued that extraterrestrials may not communicate using radio or light waves — the main mediums humans are using to search for signals from "little green men." Aliens might instead communicate through dark matter, the researchers wrote. That's the mysterious form of matter that should exist in order to provide enough gravitational force to keep galaxies from flying part, but which is not directly observable, because it doesn't interact with the electromagnetic spectrum. Aliens might even be dark matter, the researchers wrote. [7 Huge Misconceptions about Aliens]

In that sense, humans might be so focused on searching for aliens using the kind of technology familiar to us that we miss the communications all around us, the researchers wrote. To demonstrate human inattention, the researchers conducted an experiment inspired by a famous psychology protocol from 1999. In the original experiment, researchers asked participants to do a task (say, counting the number of passes in a pickup basketball game) while watching a scene in which the investigators had inserted something truly ridiculous (say, a guy in a gorilla suit strolling right through the middle of the game). The researchers found that hardly anyone noticed the gorilla.

To update these findings for the SETI age, the researchers asked 137 participants to scan aerial photos of interplanetary imagery and search for structures that appeared unnatural, built by humans (or aliens). In one image, the researchers inserted a small photo of a person in a gorilla suit waving.

Only 45 out of 137, or 32.8 percent, of the participants noticed the gorilla. The researchers also asked the participants to take some surveys to reveal whether they had a more intuitive cognitive style or a more analytical cognitive style. It might seem that the intuitive types would be less likely to scan the scene carefully, thus missing the gorilla, but that was the opposite of what the researchers found.

"Those with a more intuitive cognitive style detected the gorilla more compared with the more rational/analytical style," De la Torre said. It might be that the rational types were more focused on the task at hand, making them blind to unexpected phenomena like the gorilla.

Shostak agreed to some extent. If you'd been able to ask a trilobite 500 million years ago who it expected to run the Earth in another few hundred million years, it might have dreamed up a "really souped-up trilobite," Shostak said. The organism probably wouldn't have foreseen a couple of mass extinctions and the upheaval of all forms of life on Earth. Humans likely face that same sort of problem in imagining life on other planets, Shostak said.

On the other hand, Shostak said, SETI researchers have given the matter some thought. There are arguments, he said, that humans are actually a pretty good example of what an intelligent life-form might need to get by — opposable thumbs, stereovision — and thus looking for aliens who look like us isn't a bad strategy. There are also arguments that the most likely type of extraterrestrial intelligence won't be biological at all, but will be artificially intelligent machines created by biological, but less bright, creators, Shostak said.

The idea of dark matter as an alien being seems less likely, he said, given that intelligence requires some level of complexity. Dark matter is currently hypothesized to consist of some undescribed theoretical particle, possibly WIMPs, or weakly interacting massive particles. A bunch of particles "isn't going to give you anything that's organized enough to get you intelligence," Shostak said.

For De la Torre, the lesson of the "cosmic gorilla" is that SETI researchers need to consult with psychologists and neuroscientists.

"Currently, all psychological work in this area has been majorly dedicated to look[ing] into the impact of contact [with aliens] in our society," he said, but psychology has more to offer. "If we want to find other intelligences, multidisciplinary work is needed, and psychologists are the experts for intelligence matters."