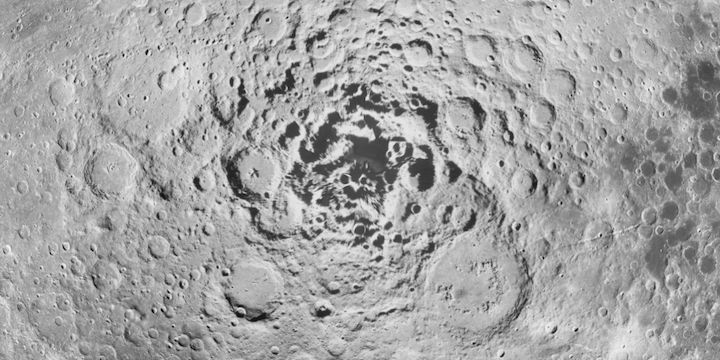 China is aiming to be the first to land at the Moon's south pole in order to establish a research station and investigate potential resources, a senior official with China's lunar exploration programme has said.

Wu Weiren, a chief designer involved in China's Chang'e lunar exploration programme, told CCTV that a fourth phase of Moon missions are being planned, with the south pole a key target and the possible site for a robotic lunar research station.

"As only the Moon's south pole can receive sunlight in most of its area throughout the year, we want to land at such a place where there might be abundant sunshine and possibly water to build a research station to carry out relevant research using resources there," Wu said.

"Nobody has ever landed there yet. So it will be the first landing if we make it. But there are some other countries that are preparing for that," Wu added.

India's Chandrayaan-2 mission could target the region later this year, while China's own, immediate plans include a lunar far side landing in 2018 and a sample return mission in 2019.

China has sent two orbiters, Chang'e-1 and Chang'e-2, to the Moon, and in late 2013 soft-landed the Chang'e-3 probe on Mare Imbrium, together with the Yutu (Jade Rabbit) rover.

In December the country will attempt an unprecedented soft-landing on the lunar far side with Chang'e-4, using the backup spacecraft to Chang'e-3.

The third phase will consist of a sample return mission, designated Chang'e-5, and possible backup lunar far side or polar region sampling mission with Chang'e-6.

The Chang'e-3 lander, viewed from the Jade Rabbit/Yutu rover on Mare Imbrium. Chinese Academy of Sciences

The complex Chang'e-5 mission is due to launch in 2019 via Long March 5 rocket, landing near Mons Rumker in Oceanus Procellarum, collecting up to 2 kilograms of lunar regolith before an automated docking in lunar orbit and return to Earth. It would be the first collection and return of Moon samples by any country since the mid-1970s.

The fourth phase, according to the new and previous information released, will focus on the Moon's polar regions. Plans being drawn uptentatively include robotic exploration of the lunar poles, in-situ resource utilisation and technology demonstration missions, and a research base.

Zhao Xiaojin, a senior official from the China Academy of Space Technology (CAST), an institution focused on developing and making spacecraft, said earlier this month that the research base will initially be robotic, but could be run by humans upon the advent of Chinese crewed missions, which could be possible by the 2030s.

The fourth phase is likely to consist of three or four missions during the period of 2020-2030. This has not been approved by the government, which is currently carrying out its 13th Five Year Plan for the period 2016-2020, with its civilian, space science and commercial space activities outlined in a white paper. Success of the Chang'e-4 and Chang'e-5 missions could see the next phase appear in the following set of official plans.

The lunar poles are of great scientific interest and could offer new insights into the origins and evolution of the Earth-Moon system and solar system itself, according to a 2012 paper by Ian Crawford, a professor of planetary science and astrobiology, and others.

The lunar poles also potentially contain areas of water ice, preserved in permanently shadowed craters, and other places almost permanently bathed in sunlight, both of which could be extremely useful in terms of resources and for future human outposts.

Planetary scientist Paul Spudis is one of many that notes that China’s space activities are entwined with its military, despite a growing focus on space science, scientific discovery and deep space exploration.

Spudis has warned that China’s lunar ambitions are veiled attempts to gain ‘cislunar space control’, and advocates for the United States to renew its interest in the Moon.

Under the Trump administration and a newly-formed National Space Council, the United States has since stated its intention to return humans to the Moon, marking a shift from the Obama era roadmap for a 'Journey to Mars'.

Edges of the solar system

Wu also wants China to explore the far reaches of the solar system: "It is 60 years since China started its space program. We have not departed from the Earth over the past 50 or 40 years.

"Now that we have the conditions we cannot confine ourselves to low-Earth orbit or the Moon. We should go further into the deep space, especially the fringe of the solar system, somewhere between 10 billion km or 20 billion km."

"I am visualising a target of reaching to 15 billion kilometers by 2049, when the country celebrates the 100th anniversary of the founding of the People's Republic of China," Wu said. No mission proposal was linked to the target.

"By implementing the lunar probe project, we will build a network for Earth-deep space control and communications," Wu, a member of the consultative body of China's ongoing national parliamentary sessions, added.

Living on the Moon: A Chinese conceptual lunar base 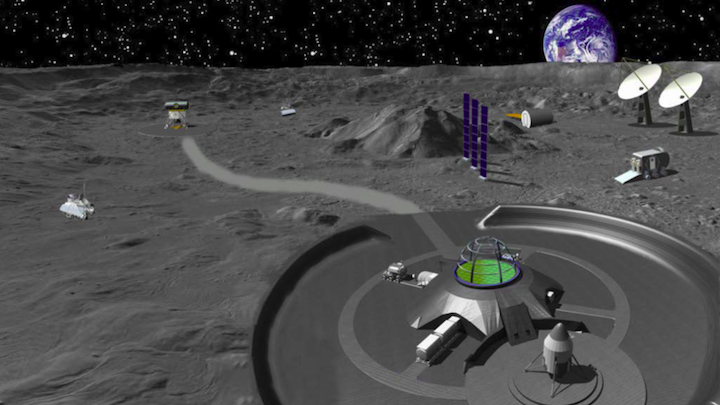 A conceptual design for an integrated human lunar base, developed by researchers at the China Academy of Space Technology (CAST). CAST

Researchers at a major Chinese space technology institute are working on a conceptual design for a habitable lunar base ahead of expected human missions to the Moon in the 2030s.

The idea of a Chinese human exploration mission to the Moon has long appeared in the media and is to a large extent expected to take place in the future by the global space community. Such a venture is unlikely, however, to be a repeat of the Apollo ‘flags and footprints’ approach to lunar exploration and will take a long-term approach.

One hint of this can be seen in a comprehensive conceptual design for a human lunar base being studied by researchers and scientists at the China Academy of Space Technology (CAST), an institute under CASC, the main contractor for the Chinese space programme.

Professor Guo Linli of CAST’s Institute of Manned Space System Engineering gave a presentation on the base at the Global Space Exploration Conference (GLEX) in Beijing in June, which details a design to allow long-term human stays on the Moon, with the goals of scientific research, technical experiments and resource utilisation.

While far from being an official plan, the concept looks at possible motives and required research, systems and technologies, and could form the basis for, or influence, a future concrete human lunar project.

Guo’s talk was based on a multi-author paper which focuses on the habitat for the base, and compares and analyses three types of habitat configurations.

The paper opts for an integrated approach, using rigid modules for the interior and a constructed structure created by 3D printing for the exterior, as a later stage, as illustrated in the main image above.

The interior main body of the integrated human lunar base consists of a habitation module, laboratory module and support module, connected by expandable joint structures but separate and somewhat independent of each other, for reasons of psychological needs and personal health.

The living area module would contain the kitchen, gym, toilet and necessary facilities, with the communication system, main computer, central control and backup systems located in the support module. Also detailed are considerations for emergency situations, with each habitat having three exits, including one to a pressurised rover which can deliver astronauts to a launch/landing area.

Water supplies could double up as a protective layer in the walls of the habitats to provide protection against radiation.

Emergency rescue design for the CAST conceptual lunar base. CAST

The main specifications state that the base would have a design lifetime of at least 8 years, be capable of hosting 3-6 astronauts at a time for periods of 3 months or greater at a time, and be able to run automatically without human presence.

Power sources, in addition to using solar arrays, will include nuclear power and a regenerative fuel cell, with excess energy going towards electrolysing water to obtain hydrogen and oxygen.

A constellation of circumlunar and polar orbit satellites would provide communications, navigation services and wide area network access for spacecraft, rovers and the lunar base.

The paper uses Sinus Iridum as the site for the base, but Marius Hills and Cabeus crater are cited as excellent candidates. Final site selection would involve analysing the landform and physiognomy, accessibility, thermal environment, sunlight conditions, protection from micro meteoroids and potential for utilisation of in-situ resources.

Steps and leaps to a lunar base

A massive project such as this is a long way off, but a possible path towards it can be traced.

Professor Guo told gbtimes.com that, “After Chang’e-5 China will have lunar soil samples. I want to carry out research into how to generate oxygen from this lunar soil,” with possible water sources also being of great interest.

This mission will be followed by further robotic lunar missions, including another sample return, possibly to the far side (Chang’e-6), and newly proposed missions to the lunar poles in the early 2020s which are slated for technology demonstration and in-situ resource utilisation tests.

China’s main human spaceflight project is the Chinese Space Station (CSS), which will keep the country busy in low Earth orbit for around a decade after its completion in the early 2020s.

However, construction of the CSS will bring valuable expertise and lessons, as well as experience in long-term stays in space, regenerative life support and other areas. But getting to the Moon is currently not possible.

Guo notes also that China’s launch vehicles are currently not sufficient for human lunar missions. A variant of the Long March 5 can be used for launching CSS modules and an under-development next generation, deep space version of the Shenzhou crewed spacecraft, but a gigantic new, Saturn V-class rocket will be required for a lunar base project.

Named Long March 9, it is in the early phases of development and CASC aims to have it fly before the end of the 2020s. If that holds, the super heavy lift launcher could facilitate a lunar base project in the 2030s.

Before then, through investigation and research, Guo – who also instructs university students on lunar base design – and her team will aim to identify scientific goals of a human lunar base and determine the available lunar in-situ resources, and from there develop the necessary scientific experiments and technology.

For operations on the Moon, required research includes evaluating lunar soil as a building material. Possibly of great help is that the European Space Agency, which has designated China a strategic partner, is already testing 3D printing methods with simulated lunar material.

Ms Guo noted in conclusion to her presentation that the construction cycle and cost will require a wide range of international cooperation partners and commercial operations to get such a project off the ground and onto the lunar soil.

The paper begins its introduction with the Russian astronautics pioneer and formulator of the rocket equation, Konstantin Tsiolkovsky: “The earth is the cradle of humanity, but one can’t stay in the cradle forever,” before positing that humans never stop exploring, citing Columbus and Gagarin.

Currently, the European Space Agency, with the Moon Village concept, Russia, and the United States, with the Deep Space Gateway proposal and a recent new US space policy directive, agree that the Moon is the place to be.

An image of a lunar crater taken by China's Chang'e-2 lunar probe. Chinese Academy of Sciences