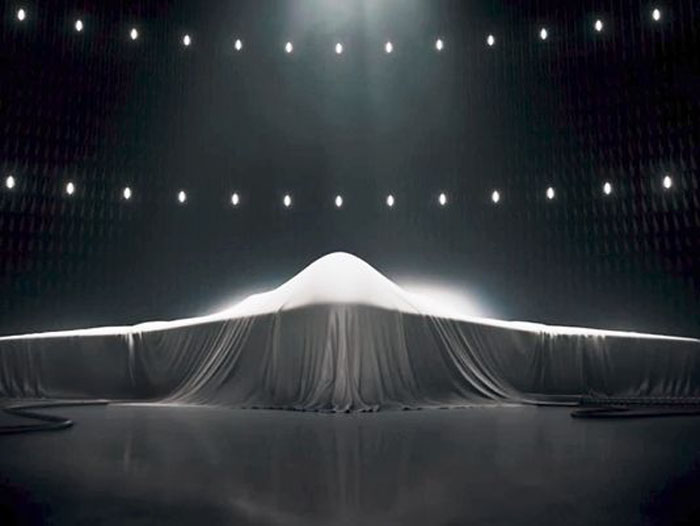 The ad shows the company's legacy of building flying wings, first with the YB-35 prototype from the 1940s, then the B-2 Spirit bomber developed in the 1980s and finally the X-47B unmanned system being developed for the Navy. And then ... another flying wing shape, covered in a sheet.
Text wise, it's a simple ad with almost no voice over. "Building aircraft, the likes of which the world has never seen before," the narrator intones. "This is what we do."
But for anyone tangentially aware of the LRS-B program, the implications are clear: we're Northrop, and we know how to make a new bomber.
It's not the first time Northrop has teased a TV audience with a new design. This ad has been running in the DC area for several months, and follows a similar pattern: showing the history of the company before ending with a hint of its future.
Keep an eye out for the ad and let us know when you see it.
Quelle: DefenseNews
-
Update: 8.05.2015
.
Fixed price for LRS-B 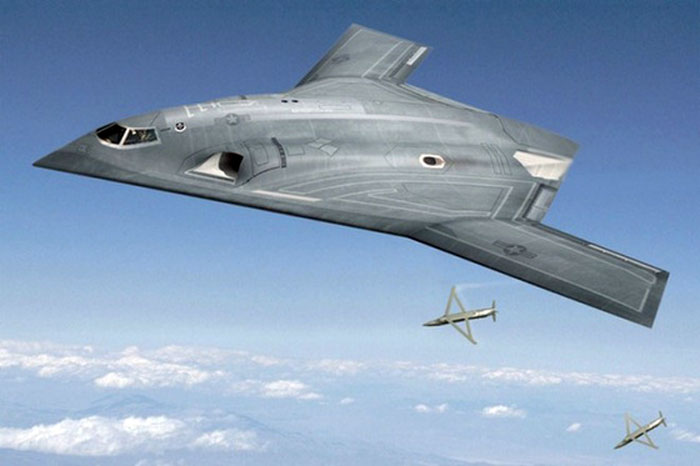 The boss of USAF acquisition William LaPlante spoke at a Senate Armed Services Committee hearing on March 19 and indicated that the forthcoming Long Range Strike - Bomber (LRS-B) will be structured for a fixed-price production phase. Fixed-price contracts have tended to be associated with mature programs where cost implications are well understood thorough knowledge of development phases. While the competitors Lockheed Martin/Boeing and Northrop Grumman will have spent a considerable amount of time and money on their respective bids, and with a development phase planned to start following contract award, it suggests that the respective bids will be based on fairly mature technology and research. In an interview with Air Force Magazine last year, Mr LaPlante said the LRS-B would not be chosen based on drawings alone but by evaluating 'variants ... of technical articles; ... prototypes, if you want to call it.' This indicates that both parties may well have technology demonstrators that are already flying...
USAF has said it plans to decide the winner of the LRS-B competition in June.
Quelle: COMBAT AIRCRAFT
-
Update: 7.04.2016
.
New B-21 Stealth Bomber Revealed 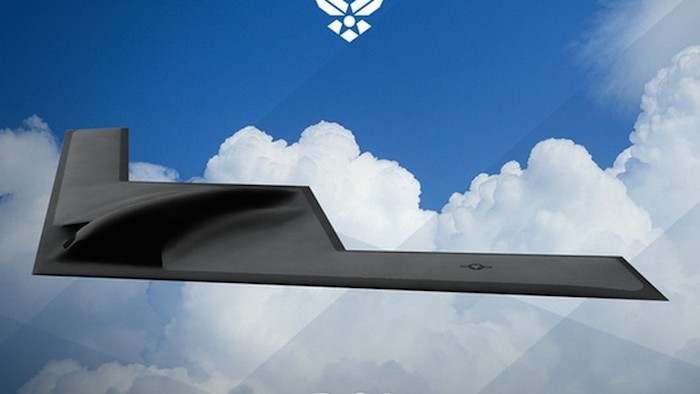 An artist rendering unveiled by the US Air Force.
-
The US Air Force has unveiled a rendering of the new Long Range Strike Bomber and revealed its official designation, B-21.
Secretary Deborah Lee James revealed an image of how the B-21 could look, as well as its designation, at the Air Warfare Symposium.
The Secretary shared a concept design of the next-generation bomber, which will be built by Northrop Grumman. She also announced the aircrafts long-awaited designation, calling it the B-21.
It is understood that service members will be given an opportunity to help name the bomber in the near future.
Secretary Deborah Lee James said:
“So we have an image, we have a designation, but what we don’t yet have, we don’t yet have a name and this is where I’m challenging and I’m calling on every airman today, to give us your best suggestions for a name for the B-21, America’s newest bomber.”
The USAF first revealed last year that the LRS-B’s development was much further along than had been publicly acknowledged and more than usual before a contract award. Final requirements had been finalised since May 2013.
The USAF plans to purchase 80 to 100 aircraft at a cost of $550 million each. The aircraft will be a long-range strategic bomber, intended to be a large-payload stealth aircraft capable of carrying thermonuclear weapons.
Quelle: UK Defense
---
Update: 21.12.2017
.

Wall Street investors and Wall Street analysts, along with the Department of Justice, are pondering Disney’s massive acquisition of much of 21st Century Fox, a consolidation that may reshape the entertainment industry landscape.

While defense mergers rarely involve anyone’s favorite movies and are financial dwarves compared to ones like 21st Century Fox and Disney, they remain crucial because of their importance to national security. The recent announcement by Northrop Grumman that it intends to acquire Orbital ATK, a proposal currently going through the formal government approval process, is a case in point.

Recent acquisition history suggests that a merger bringing together the right partners can generate innovative products and field them faster — an outcome presently being emphasized within the Pentagon. The right match — irrespective of the size of the companies — can bring together advanced technologies, concepts, and capabilities to meet future demands in new ways, and successfully get them to market. Smaller companies often struggle to meet the scale of the military customers’ needs and the customer’s operational urgency.

In this light, the pending Northrop Grumman-Orbital deal appears to make enormous sense to defense customers. Their product lines are complementary and, the proposed combination of the two companies’ competencies brings the potential to accelerate the development and fielding of new innovative capabilities in critical global security domains.  This agility generates new competitiveness, and offers more affordable options in the defense marketplace. The combination of Northrop Grumman and Orbital will enhance competition in many areas, including space, missile defense, and tactical/precision-guided missiles.

Today’s national defense industrial base is quite different from the one that existed just twenty-five years ago when then Deputy Defense Secretary William Perry convened a group of defense industry CEOs at the Pentagon for an event widely known as “the last supper.” With the Cold War over, Perry – an unusual combination of scientist, visionary, and defense intellectual – told his dinner guests that the Pentagon’s modernization accounts would be greatly reduced in the coming years.  As a result, the industry would have to significantly consolidate.

What followed was a five-year frenzy of consolidations that according to noted industry analyst Pierre Chao compressed 107 companies into five.  In later years, Perry would suggest that he was not seeking a smaller industrial base, but one that was leaner and more efficient, capable of stimulating innovative capabilities and quickly and economically delivering them to the warfighter.

In the case of the acquisition by Northrop Grumman of Orbital ATK, such innovation and economic efficiency is exactly what he had in mind.

Orbital ATK is itself the result of a recent merger. It was formed in February 2015 from the combination of Orbital Sciences Corporation with portions of Alliant Techsystems.  The combined company produces a product array including launch vehicles, solid-fuel boosters, small and medium satellites performing numerous missions, and various types of munitions including sophisticated precision weapons.

Northrop Grumman is now hard at work on the B-21, a successor aircraft to the B-2, and the company now boasts a major presence in defense electronics, large satellites, advanced sensors, cyber expertise, and command and control capabilities. In other words, the personalities of the two companies are identical and their product lines complementary.

The post-Cold War consolidation of the defense industrial base occurred both vertically and horizontally, with the strategic goals of synergy, increased investment capital, more market influence, and greater economies of scale. Northrop Grumman emerged from those consolidations as one of the remaining major defense companies. While those past consolidations made good business sense in a monopsonistic market wrestling with declining resources, and it remains clear that the government will not allow mergers that threaten to create monopolies in any critical defense sector, fully securing the promise of lean manufacturing and management demands further consolidation.

Why? Because smaller companies that are known for innovation often find it difficult to navigate the complex demands of government acquisition and congressional appropriations, and staffing themselves to do so often sacrifices the desired leanness that leads to the cost-efficiency the government needs in an era of constrained modernization accounts.

The Northrop Grumman-Orbital combination should provide the government with a company that can accelerate the fielding of new products and mission capabilities and compete in new markets, thus driving down cost and increasing capability. This smart approach to consolidation in the defense industry is a win for American taxpayers as well as our military forces.  It is also fully consistent with the vision Secretary Perry unveiled at that “last supper” a quarter century ago.

M. Thomas Davis is senior fellow at the National Defense Industrial Association and the Forrestal-Richardson Defense Industry Chair at the Defense Acquisition University.  A former General Dynamics and Northrop Grumman employee he is not engaged in any consulting work for the companies involved. The views expressed here are his alone and do not reflect any institutional views.