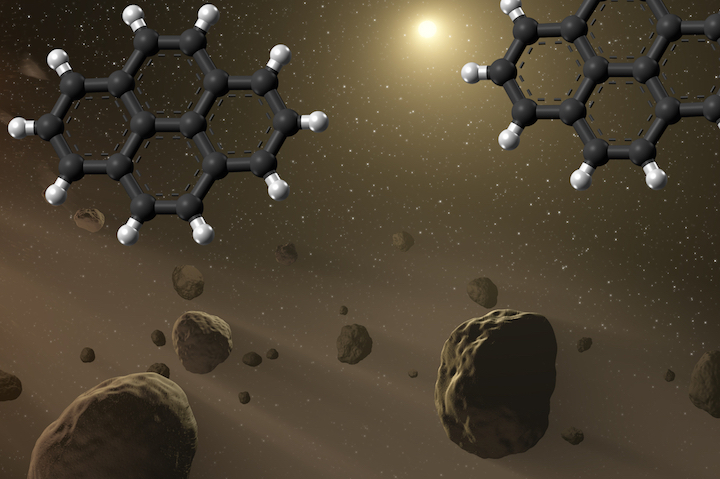 The atomic structure of pyrene molecules (upper left and upper right) are represented in an artist’s rendering of an asteroid belt, with carbon atoms shown in black and hydrogen atoms in white. A new study shows chemical steps for how pyrene, a type of hydrocarbon found in some meteorite samples, could form in space. (Credit: NASA-JPL-Caltech, Wikimedia Commons)

Scientists have used lab experiments to retrace the chemical steps leading to the creation of complex hydrocarbons in space, showing pathways to forming 2-D carbon-based nanostructures in a mix of heated gases.

The latest study, which featured experiments at the Department of Energy’s Lawrence Berkeley National Laboratory (Berkeley Lab), could help explain the presence of pyrene, which is a chemical compound known as a polycyclic aromatic hydrocarbon, and similar compounds in some meteorites.

A team of scientists, including researchers from Berkeley Lab and UC Berkeley, participated in the study, published March 5 in the Nature Astronomy journal. The study was led by scientists at the University of Hawaii at Manoa and also involved theoretical chemists at Florida International University.

“This is how we believe some of the first carbon-based structures evolved in the universe,” said Musahid Ahmed, a scientist in Berkeley Lab’s Chemical Sciences Division who joined other team members to perform experiments at Berkeley Lab’s Advanced Light Source (ALS).

“Starting off from simple gases, you can generate one-dimensional and two-dimensional structures, and pyrene could lead you to 2-D graphene,” Ahmed said. “From there you can get to graphite, and the evolution of more complex chemistry begins.”

Pyrene has a molecular structure composed of 16 carbon atoms and 10 hydrogen atoms. Researchers found that the same heated chemical processes that give rise to the formation of pyrene are also relevant to combustion processes in vehicle engines, for example, and the formation of soot particles.

The latest study builds on earlier work that analyzed hydrocarbons with smaller molecular rings that have also been observed in space, including in Saturn’s moon Titan – namely benzene and naphthalene.

Ralf I. Kaiser, one of the study’s lead authors and a chemistry professor at the University of Hawaii at Manoa, said, “When these hydrocarbons were first seen in space, people got very excited. There was the question of how they formed.” Were they purely formed through reactions in a mix of gases, or did they form on a watery surface, for example?

Ahmed said there is an interplay between astronomers and chemists in this detective work that seeks to retell the story of how life’s chemical precursors formed in the universe.

“We talk to astronomers a lot because we want their help in figuring out what’s out there,” Ahmed said, “and it informs us to think about how it got there.”

Kaiser noted that physical chemists, on the other hand, can help shine a light on reaction mechanisms that can lead to the synthesis of specific molecules in space. 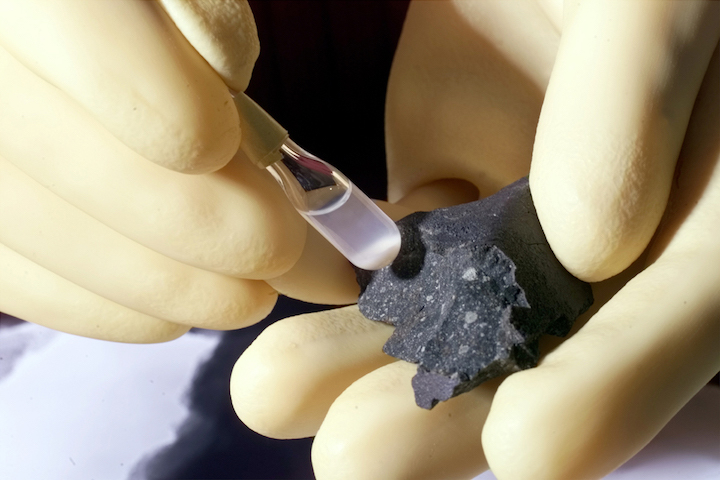 A researcher handles a fragment and a test tube sample of the Murchison meteorite, which has been shown to contain a a variety of hydrocarbons and amino acids, in this photo from a previous, unrelated study at Argonne National Laboratory. Experiments at Berkeley Lab are helping to retrace the chemical steps by which complex hydrocarbons like pyrene could form in the Murchison meteorite and other meteorites. (Credit: Argonne National Laboratory)

Pyrene belongs to a family known as polycyclic aromatic hydrocarbons, or PAHs, that are estimated to account for about 20 percent of all carbon in our galaxy. PAHs are organic molecules that are composed of a sequence of fused molecular rings. To explore how these rings develop in space, scientists work to synthesize these molecules and other surrounding molecules known to exist in space.

Alexander M. Mebel, a chemistry professor at Florida International University who participated in the study, said, “You build them up one ring at a time, and we’ve been making these rings bigger and bigger. This is a very reductionist way of looking at the origins of life: one building block at a time.”

For this study, researchers explored the chemical reactions stemming from a combination of a complex hydrocarbon known as the 4-phenanthrenyl radical, which has a molecular structure that includes a sequence of three rings and contains a total of 14 carbon atoms and nine hydrogen atoms, with acetylene (two carbon atoms and two hydrogen atoms).

Chemical compounds needed for the study were not commercially available, said Felix Fischer, an assistant professor of chemistry at UC Berkeley who also contributed to the study, so his lab prepared the samples. “These chemicals are very tedious to synthesize in the laboratory,” he said.

At the ALS, researchers injected the gas mixture into a microreactor that heated the sample to a high temperature to simulate the proximity of a star. The ALS generates beams of light, from infrared to X-ray wavelengths, to support a range of science experiments by visiting and in-house researchers.

The mixture of gases was jetted out of the microreactor through a tiny nozzle at supersonic speeds, arresting the active chemistry within the heated cell. The research team then focused a beam of vacuum ultraviolet light from the synchrotron on the heated gas mixture that knocked away electrons (an effect known as ionization).

They then analyzed the chemistry taking place using a charged-particle detector that measured the varied arrival times of particles that formed after ionization. These arrival times carried the telltale signatures of the parent molecules. These experimental measurements, coupled with Mebel’s theoretical calculations, helped researchers to see the intermediate steps of the chemistry at play and to confirm the production of pyrene in the reactions.

Mebel’s work showed how pyrene (a four-ringed molecular structure) could develop from a compound known as phenanthrene (a three-ringed structure). These theoretical calculations can be useful for studying a variety of phenomena, “from combustion flames on Earth to outflows of carbon stars and the interstellar medium,” Mebel said.

Kaiser added, “Future studies could study how to create even larger chains of ringed molecules using the same technique, and to explore how to form graphene from pyrene chemistry.” 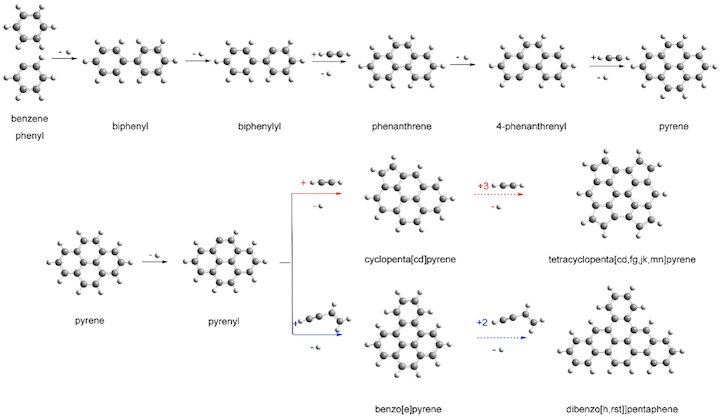 (Click image for larger view.) A reaction pathway that can form a hydrocarbon called pyrene through a chemical method known as hydrogen-abstraction/acetylene-addition, or HACA, is shown at the top. At bottom, some possible steps by which pyrene can form more complex hydrocarbons via HACA (red) or another mechanism (blue) called hydrogen abstraction – vinylacetylene addition (HAVA). (Credit: Long Zhao, Ralf I. Kaiser, et al./Nature Astronomy, DOI: 10.1038/s41550-018-0399-y)

Other experiments conducted by team members at the University of Hawaii will explore what happens when researchers mix hydrocarbon gases in icy conditions and simulate cosmic radiation to see whether that may spark the creation of life-bearing molecules.

“Is this enough of a trigger?” Ahmed said. “There has to be some self-organization and self-assembly involved” to create life forms. “The big question is whether this is something that, inherently, the laws of physics do allow.”

The study was supported by the U.S. Department of Energy’s Office Sciences, and UC Berkeley, the University of Hawaii, Florida International University, and the National Science Foundation.

The ALS is a DOE Office of Science User Facility.