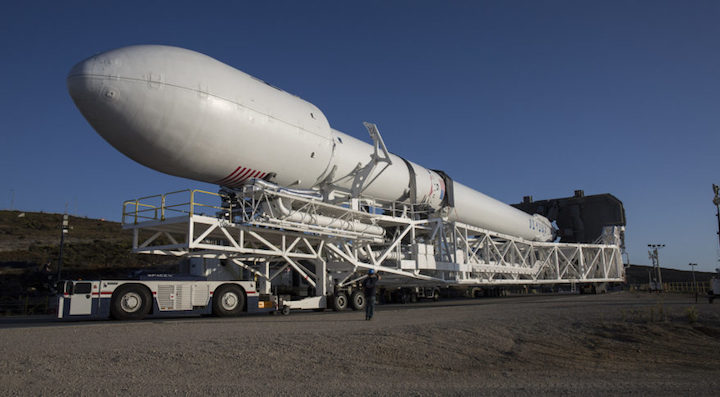 SpaceX has delayed Sunday's launch due to a requirement for further testing on the rocket's fairing, or nose cone. A new launch date will be announced soon.

Liftoff of a Falcon 9 rocket carrying the Hispasat 30W-6 spacecraft from Launch Complex 40 is targeted for 12:35 a.m. Sunday, Feb. 25, the opening of a two-hour launch window.

The forecast looks good, with an 80 percent chance of conditions meeting launch rules, according to the Air Force’s 45th Weather Squadron.

For Madrid-based Hispasat, the mission marks a return to the Space Coast after a 16-year hiatus, since a 2002 launch on an Atlas rocket.

The satellite will be Hispsat’s 11th in orbit — more than double its total five years ago. Together they distribute more than 1,250 TV and radio channels.

“This satellite is very significant for us,” Chief Technology Officer Antonio Abad said in an email. “It is the culmination of the current growth phase of the company.”

Built by Palo Alto, California-based SSL and weighing nearly six tons at launch, the satellite will beam high-definition TV programming in Spanish and Portuguese to the Americas, Europe and Northern Africa. It also will provide broadband Internet access in rural areas and support corporate communications networks. 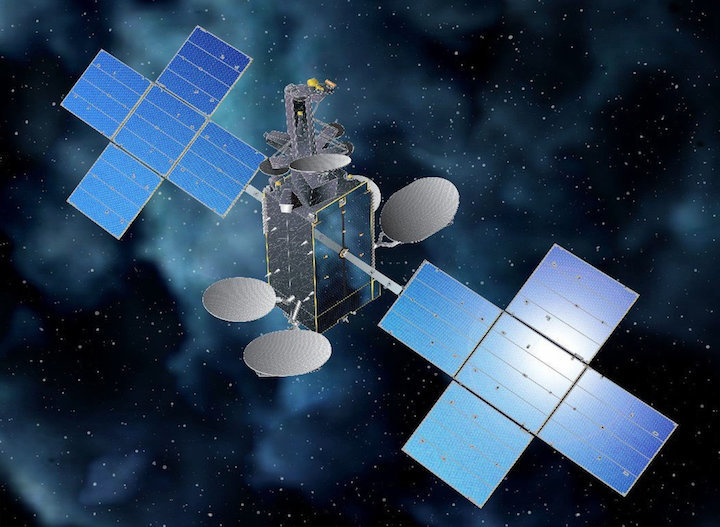 SpaceX has delayed its weekend launch of a Spanish communications satellite to allow time for extra tests on the mission's Falcon 9 rocket.

The Falcon 9 was scheduled to launch the Hispasat 30W-6 communications satellite Sunday (Feb. 25) at 12:35 a.m. EST (0535 GMT) from Space Launch Complex 40 at the Cape Canaveral Air Force Station in Florida. But on Saturday, SpaceX said it needed extra time to test the rocket's payload fairing, the clamshell-like nose cone that protects satellites during flight. A new launch date has not yet been announced.

"Standing down from this weekend's launch attempt to conduct additional testing on the fairing's pressurization system," SpaceX representatives wrote on Twitter. "Once complete, pending range availability, we will confirm a new targeted launch date."

SpaceX is not the only one hoping to launch a space mission from Cape Canaveral Air Force Station in the next week. On Thursday (March 1), NASA and the United Launch Alliance are scheduled to launch an Atlas V rocket carrying the new GOES-S weather satellite from Space Launch Complex 41 at the station.

So, SpaceX may only have a short time to complete the Falcon 9 fairing checks before having to wait until after the GOES-S launch later next week for another opportunity.

"The launch will take place as soon as the incident is resolved and the launch window with the greatest chances of success is available," Hispasat, the satellite communications company that owns the Hispasat 30W-6 satellite, said in a statement.

Hispasat 30W-6 will provide television, broadband and other communications services to Hispasat customers across Europe, North Africa and the Americas, according to a Hispasat description. The satellite will orbit the Earth in a geosynchronous orbit in the 30-degrees west position, and serve as a replacement for the older Hispasat 30W-4 satellite. Hispasat 30W-6 is designed to last at least 15 years in orbit.

The launch of Hispasat 30W-6 will follow close after SpaceX's successfully launch of another mission for Spain. On Thursday (Feb. 22), a SpaceX Falcon 9 rocket launched the Paz Earth radar-imaging satellite into orbit for the Spanish company Hisdesat. Two prototype satellites for SpaceX's Starlink broadband internet constellation also launched on that mission. 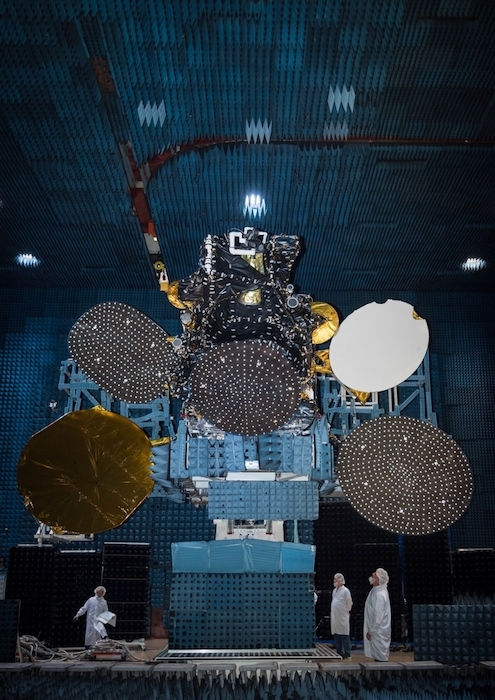 SpaceX aims to launch its next mission, the 50th flight of a Falcon 9 rocket, just after midnight Tuesday from Cape Canaveral with a commercial communications satellite for Hispasat.

The commercial mission was supposed to lift off last month, but SpaceX delayed the flight to complete additional testing on a pressurization system on the Falcon 9’s payload fairing, the shroud that will shield the Hispasat 30W-6 satellite during the first few minutes of launch.

SpaceX said earlier this week that the pressurization system concern was resolved, but United Launch Alliance had Thursday and Friday reserved on the U.S. Air Force’s Eastern Range for an Atlas 5 mission with a NOAA weather satellite.

SpaceX requested a launch opportunity from the Air Force for early Thursday, around 16-and-a-half hours before the Atlas 5 launch. The Air Force was prepared to support both launches Thursday, a rapid same-day turnaround capability not demonstrated at Cape Canaveral in nearly 40 years.

But ULA and NASA officials, which had responsibility for launching the NOAA weather satellite, were concerned the Atlas 5 rocket and sensitive optics on its GOES-S meteorological payload would be exposed to the Falcon 9’s exhaust plume as it fired into space.

The Atlas 5 and Falcon 9 pads are located about a mile-and-a-half apart at Cape Canaveral, and both facilities are built with a “clean pad” design without a protective gantry to protect rockets after they roll out in preparation for liftoff.

Officials were also studying whether the Atlas 5 and the GOES-S weather satellite might be endangered by a potential mishap during the Falcon 9 launch.

SpaceX ultimately delayed the Hispasat flight to Tuesday, and a drone ship expected to recover the Falcon 9’s first stage booster returned to Port Canaveral, presumably for rest and refueling before heading back out to sea ahead of next week’s mission.

The Hispasat 30W-6 communications satellite awaiting launch on the Falcon 9 rocket is a Spanish-owned commercial video, data and broadband relay craft heading for a perch in geostationary orbit more than 22,000 miles (nearly 36,000 kilometers) over the equator.

Built by SSL in Palo Alto, California, Hispasat 30W-6 will replace an aging telecom satellite launched from Cape Canaveral in September 2002 aboard an Atlas 2AS booster.

Its telecom payload will serve customers in Spain, other parts of Europe, North Africa and Latin America.

“Hispasat 30W-6 is the fourth satellite that SSL has provided to our company,” said Carlos Espinós, chief executive officer at Hispasat. “SSL has been a flexible and reliable partner in working with us on technological advances that make satellite communications more cost effective and enable next generation space systems and missions. We look forward to using Hispasat 30W-6 to expand our service offerings and capacity in the covered regions.”

The weather outlook for Tuesday is favorable, with a 90 percent probability of conditions acceptable for liftoff.

The only slight concern is with thick clouds, but mostly clear skies are expected, with east-southeast winds of 10 to 15 mph, and a temperature of 60 degrees Fahrenheit, according to the official weather outlook issued Saturday by the Air Force’s 45th Space Wing. 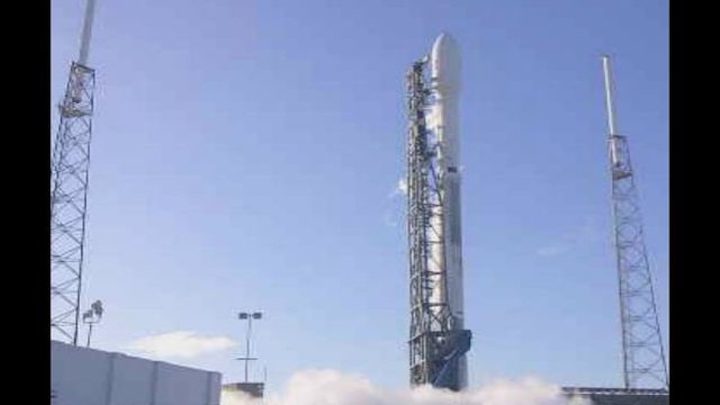 A launch forecast issued by the Air Force shows the launch window is between 12:33 a.m. and 2:33 a.m. Tuesday.

The weather is 90 percent favorable for launch, according to the Air Force forecast.

SpaceX delayed the Falcon 9 launch last weekend to perform further testing on the rocket, the company said in a tweet.

SpaceX said it was standing down to perform additional testing on the rocket’s fairing’s pressurization system.

The Hispasat 30W-6 satellite will be deployed approximately 33 minutes after launch. SpaceX will not attempt to land Falcon 9’s first stage after launch due to unfavorable weather conditions in the recovery area off of Florida’s Atlantic Coast. 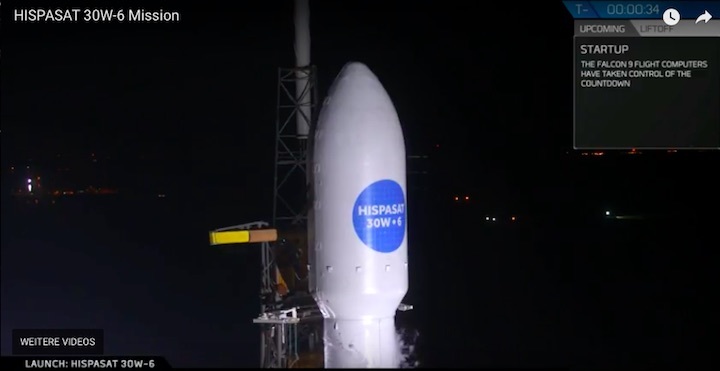 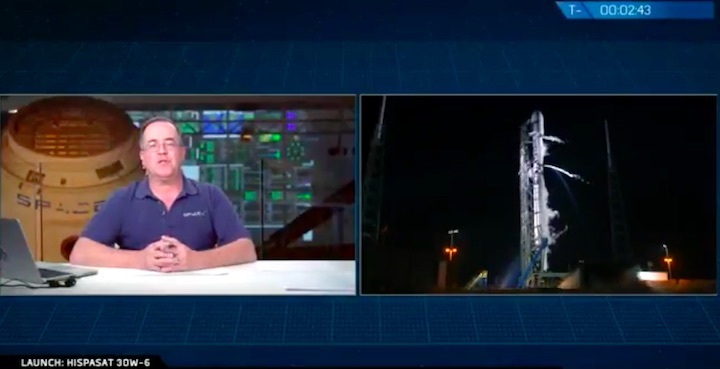 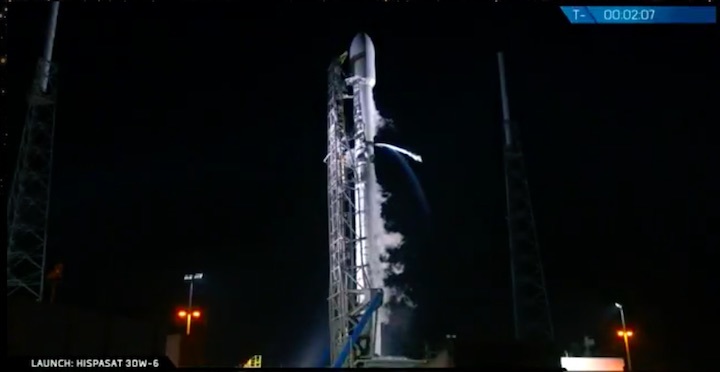 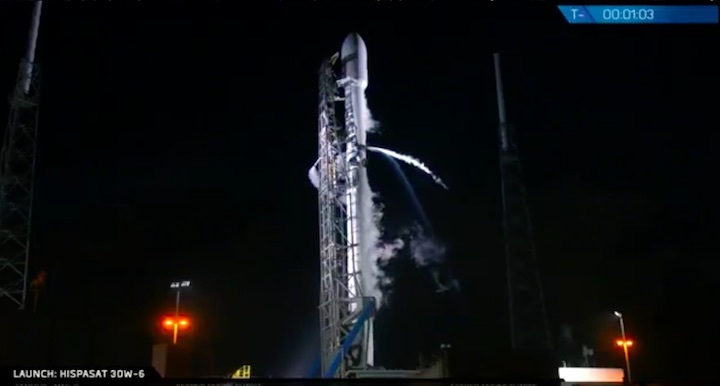 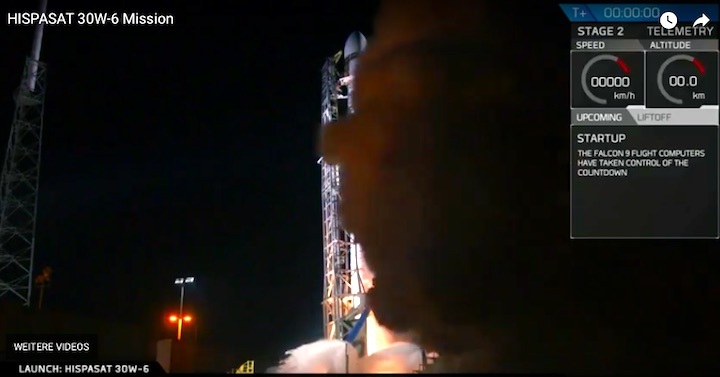 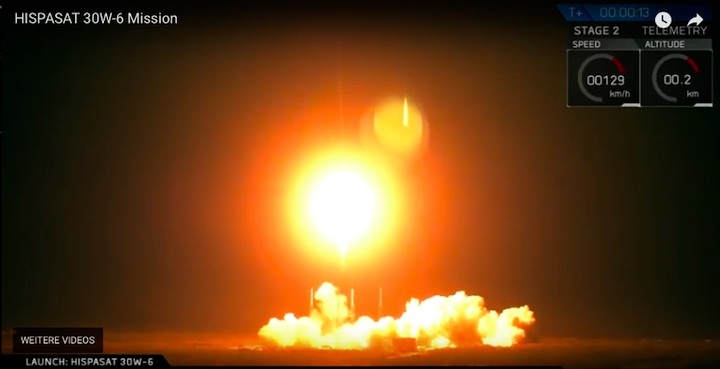 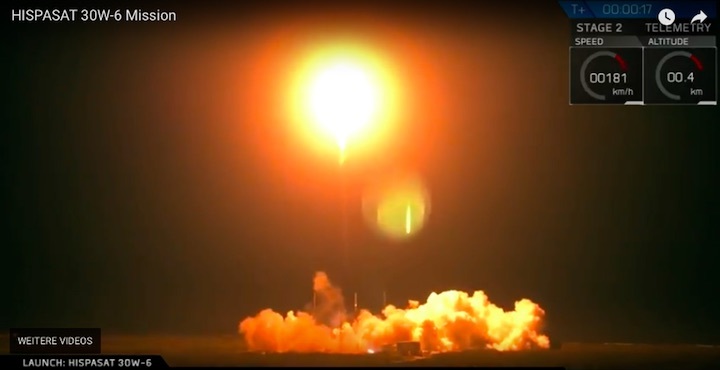 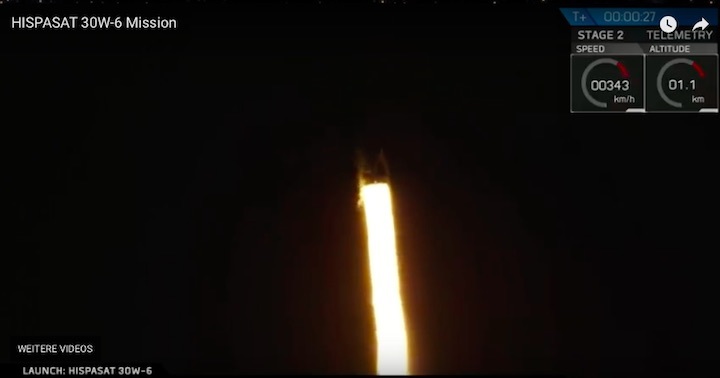 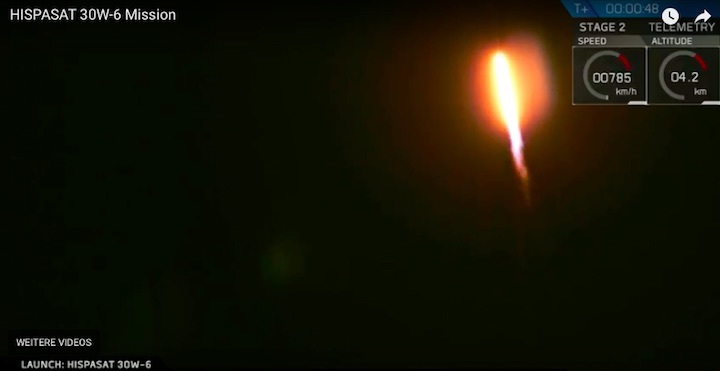 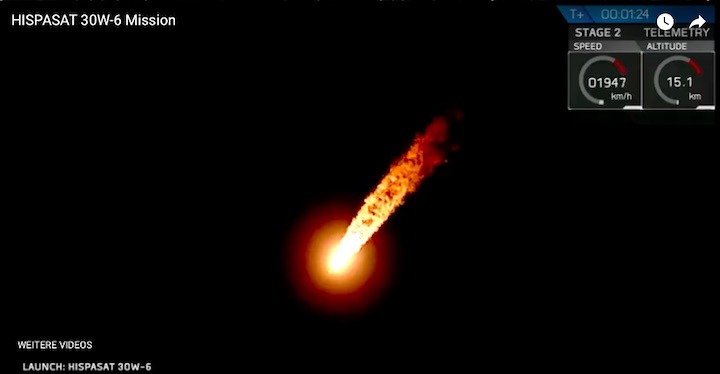 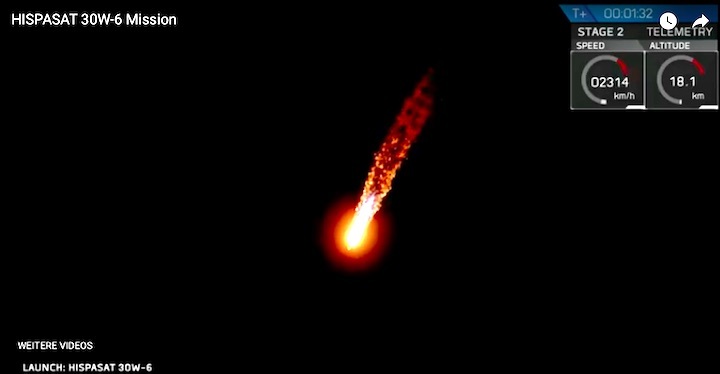 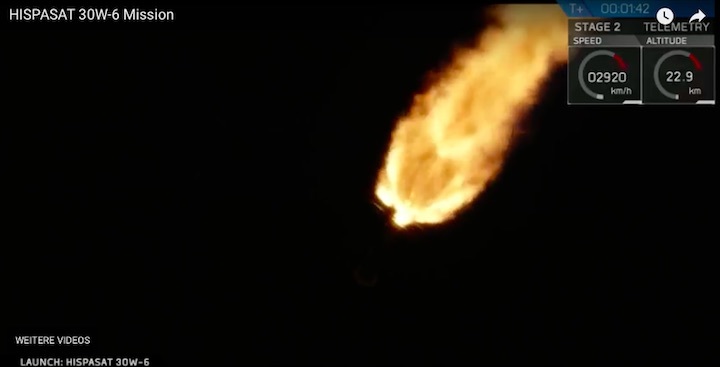 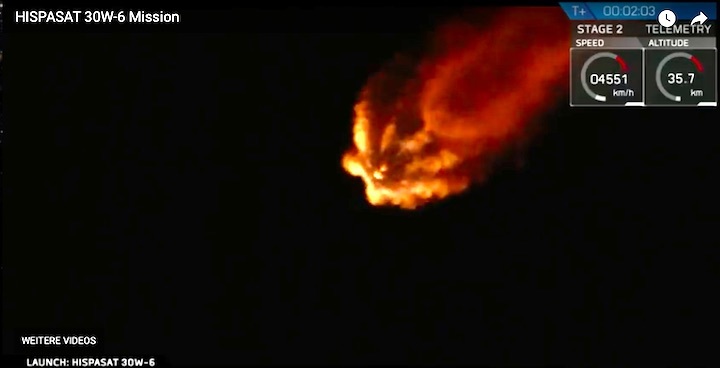 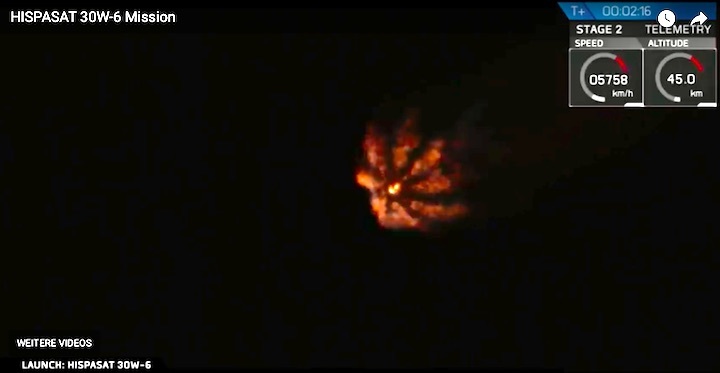 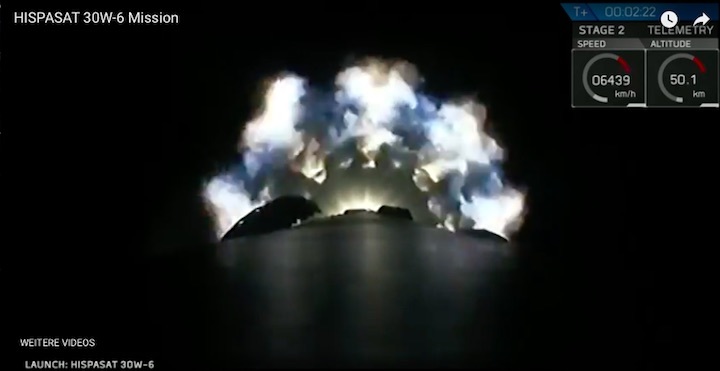 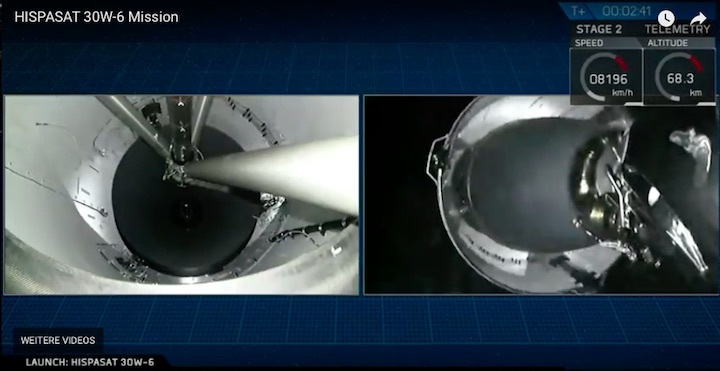 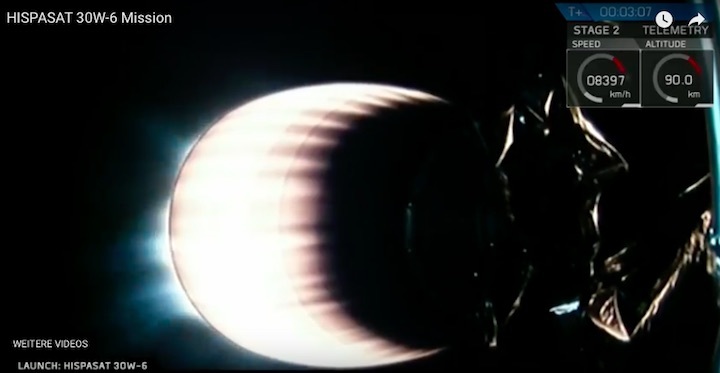 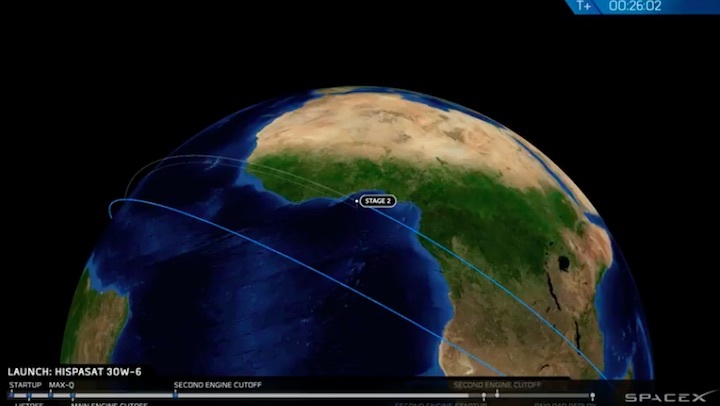 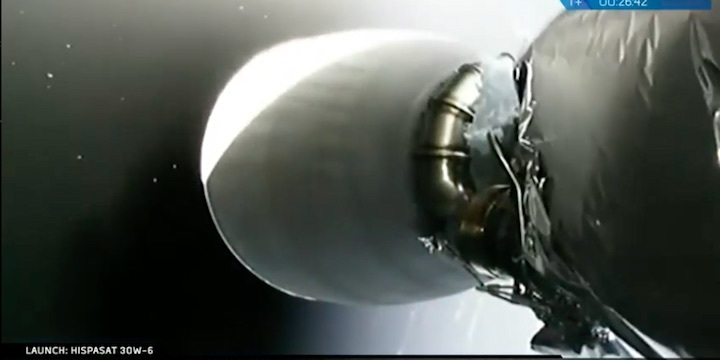 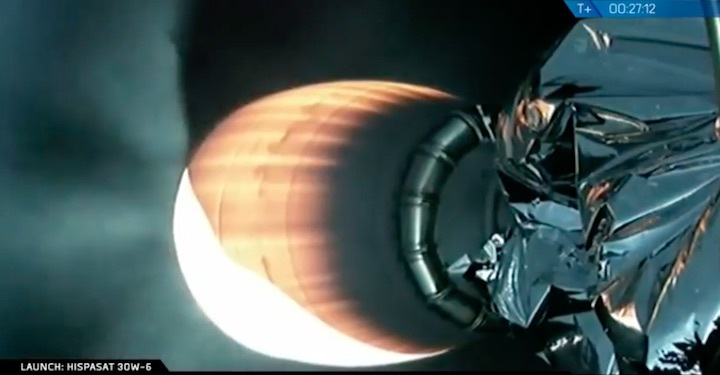 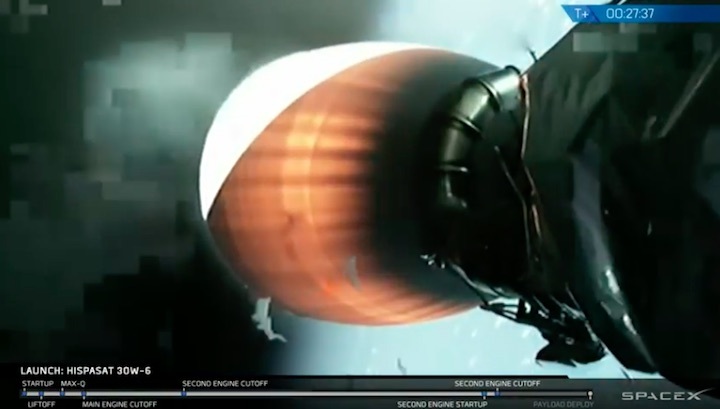 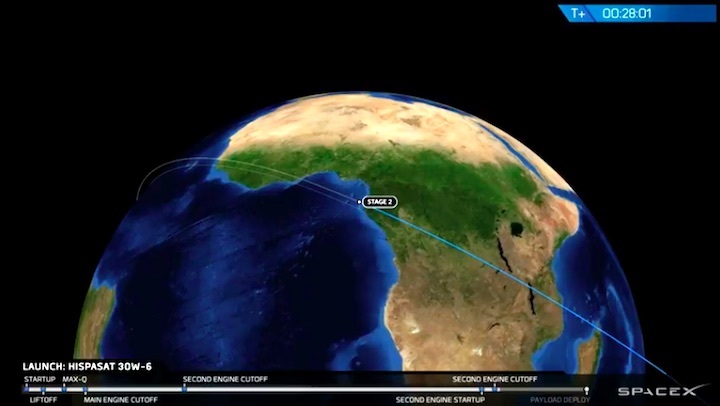 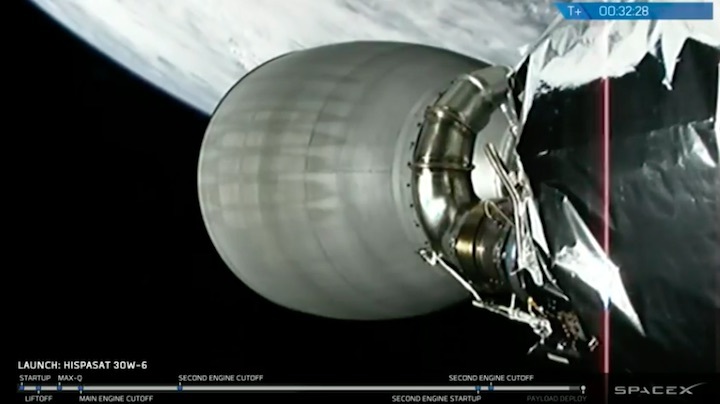 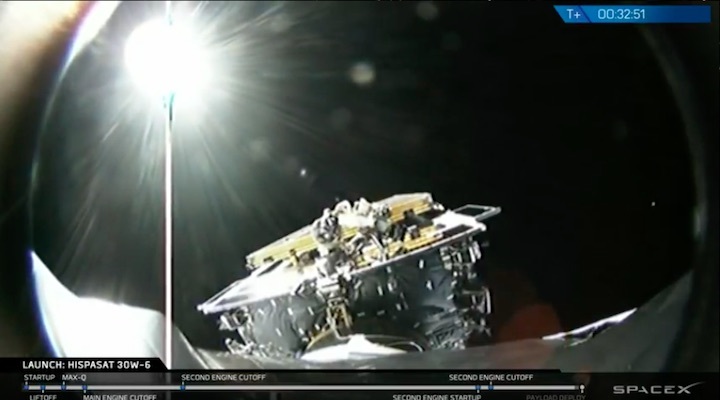 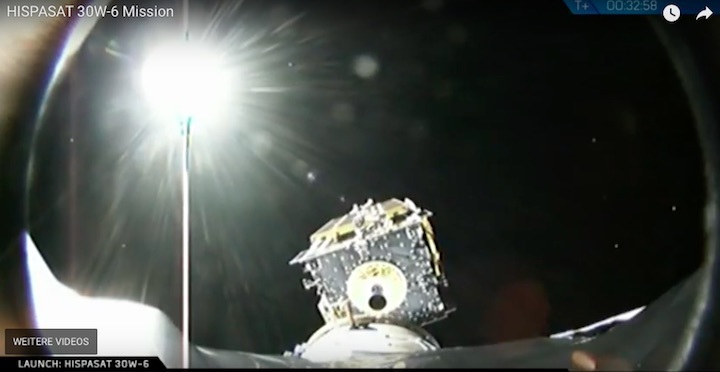 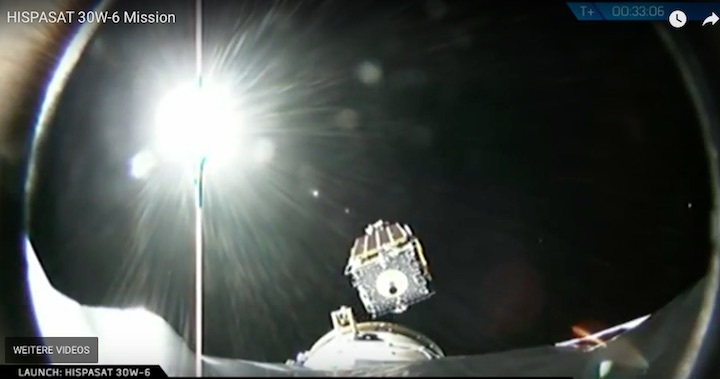