If we detect oxygen in the atmosphere of an alien world, does that mean life is present? Not necessarily: Scientists say the chemical signature of biological activity is likely to be more subtle, involving a mix of gases that might seem out of whack.

In a paper published today in Science Advances, researchers say future observatories such as NASA’s James Webb Space Telescope should look for the signature of atmospheric gases that would be in disequilibrium if it weren’t for biological processes.

The study’s lead author, Joshua Krissansen-Totton of the University of Washington, says looking for oxygen alone shouldn’t be the sole strategy in the search for life on extrasolar planets.

“This idea of looking for atmospheric oxygen as a biosignature has been around for a long time. And it’s a good strategy — it’s very hard to make much oxygen without life,” he said in a news release. “But we don’t want to put all our eggs in one basket. Even if life is common in the cosmos, we have no idea if it will be life that makes oxygen. The biochemistry of oxygen production is very complex and could be quite rare.”

He and his colleagues propose an alternative chemical formula to look for: methane plus carbon dioxide, minus carbon monoxide. 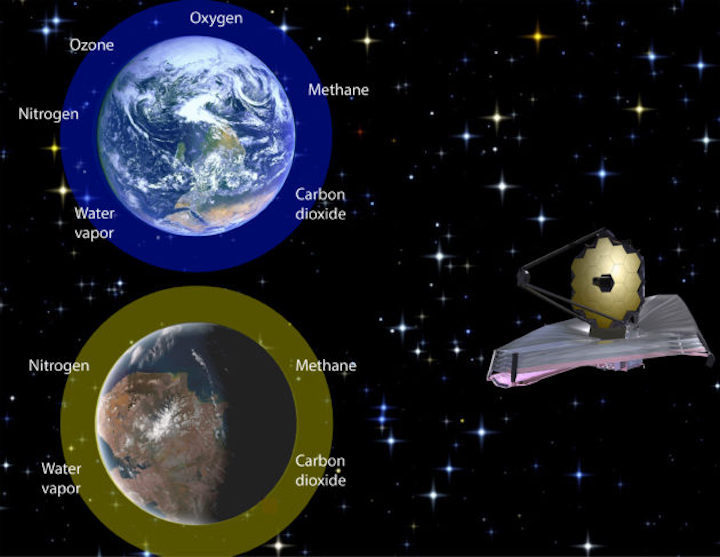 “We need to look for fairly abundant methane and carbon dioxide on a world that has liquid water at its surface, and find an absence of carbon monoxide,” said co-author David Catling, a UW professor of Earth and space sciences. “Our study shows that this combination would be a compelling sign of life. What’s exciting is that our suggestion is doable, and may lead to the historic discovery of an extraterrestrial biosphere in the not-too-distant future.”

The formula was derived by looking at what scientists believe is the early history of Earth’s atmosphere, before oxygen came to dominate. It aims to rule out non-biological methods of producing methane. In addition, the researchers assume that carbon monoxide wouldn’t build up in the atmosphere of a planet with life.

It’s not too early to figure out the formula to use when looking for life: The James Webb Space Telescope is scheduled for launch in 2019, and other future telescopes are also likely to be capable of analyzing the atmospheres of planets far beyond our solar system.

In addition to Krissansen-Totton and Catling, Stephanie Olson is a co-author of the Science Advances paper, “Disequilibrium Biosignatures Over Earth History and Implications for Detecting Exoplanet Life.”