In just a couple of years, NASA’s newest rover will be flying to Mars. The Mars 2020 mission will use the next generation of science and landing technology to collect rock samples for possible return by a future mission.

In just a few years, NASA's next Mars rover mission will be flying to the Red Planet.

At a glance, it looks a lot like its predecessor, the Curiosity Mars rover. But there's no doubt it's a souped-up science machine: It has seven new instruments, redesigned wheels and more autonomy. A drill will capture rock cores, while a caching system with a miniature robotic arm will seal up these samples. Then, they'll be deposited on the Martian surface for possible pickup by a future mission.

This new hardware is being developed at NASA's Jet Propulsion Laboratory, Pasadena, California, which manages the mission for the agency. It includes the Mars 2020 mission's cruise stage, which will fly the rover through space, and the descent stage, a rocket-powered "sky crane" that will lower it to the planet's surface. Both of these stages have recently moved into JPL's Spacecraft Assembly Facility. 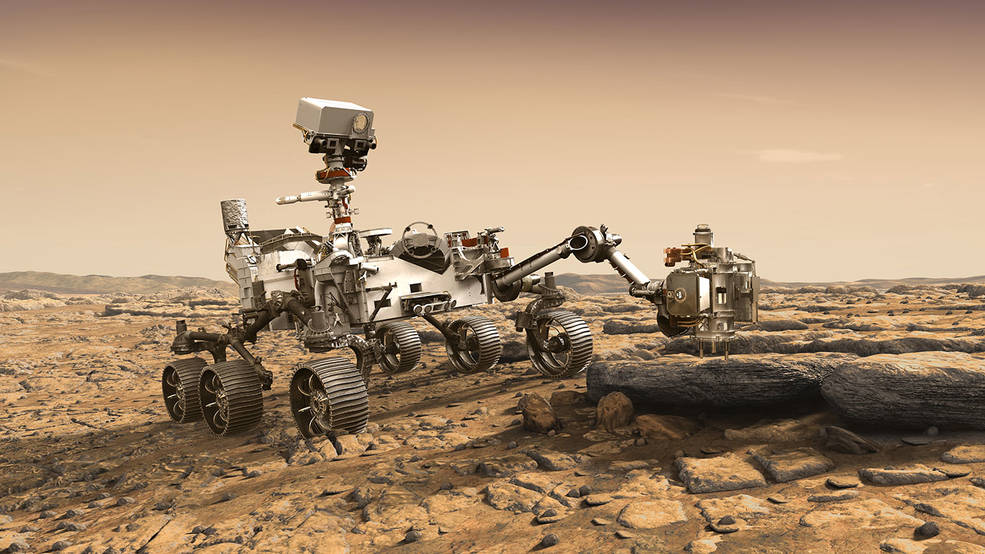 This artist's rendition depicts NASA's Mars 2020 rover studying a Mars rock outrcrop. The mission will not only seek out and study an area likely to have been habitable in the distant past, but it will take the next, bold step in robotic exploration of the Red Planet by seeking signs of past microbial life itself.
Credits: NASA/JPL-Caltech
Full image and caption

Mars 2020 relies heavily on the system designs and spare hardware previously created for Mars Science Laboratory's Curiosity rover, which landed in 2012. Roughly 85 percent of the new rover's mass is based on this "heritage hardware."

"The fact that so much of the hardware has already been designed -- or even already exists -- is a major advantage for this mission," said Jim Watzin, director of NASA's Mars Exploration Program. "It saves us money, time and most of all, reduces risk."

Despite its similarities to Mars Science Laboratory, the new mission has very different goals. Mars 2020's instruments will seek signs of ancient life by studying terrain that is now inhospitable, but once held flowing rivers and lakes, more than 3.5 billion years ago.

To achieve these new goals, the rover has a suite of cutting-edge science instruments. It will seek out biosignatures on a microbial scale: An X-ray spectrometer will target spots as small as a grain of table salt, while an ultraviolet laser will detect the "glow" from excited rings of carbon atoms. A ground-penetrating radar will be the first instrument to look under the surface of Mars, mapping layers of rock, water and ice up to 30 feet (10 meters) deep, depending on the material. 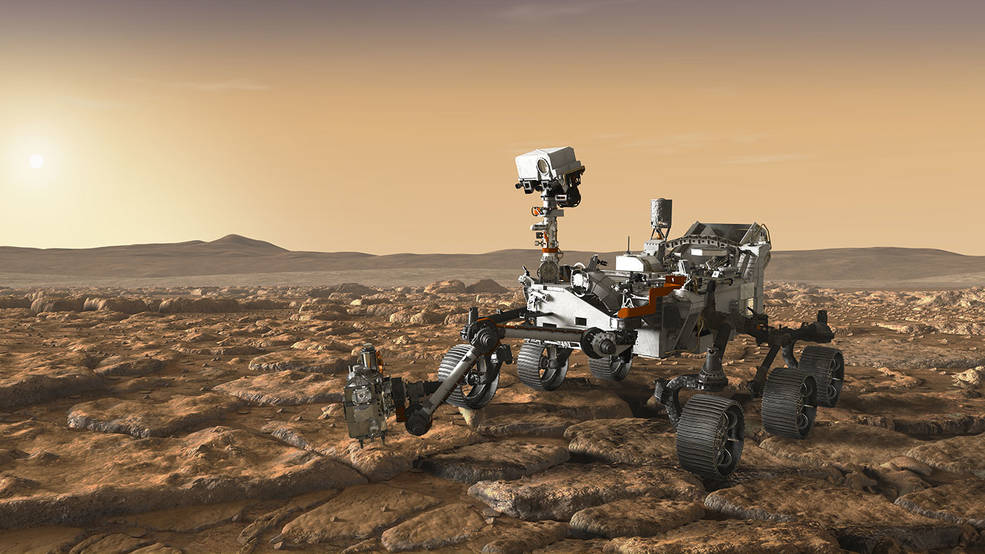 This artist's concept depicts NASA's Mars 2020 rover exploring Mars. The mission will not only seek out and study an area likely to have been habitable in the distant past, but it will take the next, bold step in robotic exploration of the Red Planet by seeking signs of past microbial life itself.
Credits: NASA/JPL-Caltech
Full image and caption

The rover is getting some upgraded Curiosity hardware, including color cameras, a zoom lens and a laser that can vaporize rocks and soil to analyze their chemistry.

"Our next instruments will build on the success of MSL, which was a proving ground for new technology," said George Tahu, NASA's Mars 2020 program executive. "These will gather science data in ways that weren't possible before."

The mission will also undertake a marathon sample hunt: The rover team will try to drill at least 20 rock cores, and possibly as many as 30 or 40, for possible future return to Earth.

"Whether life ever existed beyond Earth is one of the grand questions humans seek to answer," said Ken Farley of JPL, Mars 2020's project scientist. "What we learn from the samples collected during this mission has the potential to address whether we're alone in the universe."

JPL is also developing a crucial new landing technology called terrain-relative navigation. As the descent stage approaches the Martian surface, it will use computer vision to compare the landscape with pre-loaded terrain maps. This technology will guide the descent stage to safe landing sites, correcting its course along the way.

A related technology called the ranger trigger will use location and velocity to determine when to fire the spacecraft's parachute. That change will narrow the landing ellipse by more than 50 percent.

"Terrain-relative navigation enables us to go to sites that were ruled too risky for Curiosity to explore," said Al Chen of JPL, the Mars 202 entry, descent and landing lead. "The range trigger lets us land closer to areas of scientific interest, shaving miles -- potentially as much as a year -- off a rover's journey."

This approach to minimizing landing errors will be critical in guiding any future mission dedicated to retrieving the Mars 2020 samples, Chen said.

Site selection has been another milestone for the mission. In February, the science community narrowed the list of potential landing sites from eight to three. Those three remaining sites represent fundamentally different environments that could have harbored primitive life: an ancient lakebed called Jezero Crater; Northeast Syrtis, where warm waters may have chemically interacted with subsurface rocks; and a possible hot springs at Columbia Hills.

All three sites have rich geology and may potentially harbor signs of past microbial life. A final landing site decision is still more than a year away.

"In the coming years, the 2020 science team will be weighing the advantages and disadvantages of each of these sites," Farley said. "It is by far the most important decision we have ahead of us."

The Sky Is No Limit for Vaisala: Vaisala's Pressure and Humidity Sensors Are Soon Again on Their Way to Space

The Sky Is No Limit for Vaisala:Vaisala's Pressure and Humidity Sensors Are Soon Again on Their Way to SpaceNASA is preparing for the next mission to Mars timed for a launch in 2020. Finnish Meteorological Institute (FMI) is among the partners providing measurement equipment for the new Mars 2020 Rover. The pressure and humidity measurement devices are based on Vaisala's sensor technology and are similar to the ones already delivered to Mars on the first Curiosity Rover. In addition, Mars 2020 Rover will carry Vaisala's newer and more advanced pressure and humidity sensor heads.The Mars 2020 mission is part of NASA's Mars Exploration Program and it aims to gather more knowledge on Martian atmosphere and other environmental conditions. The Mars 2020 Rover will be equipped with Vaisala BAROCAP® and HUMICAP® pressure and humidity sensors. The sensors are part of instrumentation designed by the Finnish Meteorological Institute (FMI), and they will be used to gather accurate readings of pressure and humidity in the extreme environmental conditions of the Martian atmosphere.The new mission equipment will complement the already existing measurement tools on Mars taken there by Curiosity in 2012. While working on Mars, Curiosity and Mars 2020 Rover will create a small-scale observation network which anticipates the extensive MetNet Observation Network planned on Mars for the future. "We are very happy and proud that Vaisala's equipment has again been selected as an affiliate for space exploration that will help us understand the world around us. Accurate and reliable measurements are in the core of this understanding. Vaisala's strength is exactly that: Our sensors function reliably and accurately also in the extreme conditions on Mars", says Liisa Åström, Vice President, Products and Systems of Vaisala.Sky Is No LimitThis is not the first nor the second occasion on which Vaisala technology has gone into space. Vaisala has a long history of providing sensors for space explorations, dating all the way back to the 1950s, when Vaisala converted the frequency of a radio theodolite to help track Sputnik I, the world's first artificial satellite. Since then, Vaisala has been involved in a number of fascinating missions, providing technology to help understand the universe.Since 1992, Vaisala's carbon dioxide, humidity, and temperature sensors have been used to control life science experiments both onboard space shuttle flights and at the International Space Station.  Vaisala's pressure sensors were also part of NASA's Cassini mission which was launched in 1997, and in 2005 achieved the first ever landing on a moon in the outer solar system: Titan, the largest moon of Saturn. This is one of the most ambitious missions ever launched into space and is still ongoing.Vaisala's technology is utilized in space exploration due to their extreme stability, which is vital due to the extreme environmental conditions in space. Vaisala's sensors are able to withstand extreme heat and cold and are highly tolerant of shaking and vibration of the space travel.

Bread and ButterThe humidity and pressure measurements are in the core of Vaisala. Vaisala's HUMICAP® sensor came on the market already at the beginning of 1970s, and BAROCAP® only some years after.Vaisala HUMICAP® and BAROCAP® sensor technologies are used in numerous well known Vaisala products, such as radiosondes, weather stations and various industrial applications. Thanks to the long-term stability and accuracy of these sensors, as well as their ability to tolerate dust, chemicals, and harsh environmental conditions, the technologies are suitable for very demanding applications, also off Earth.Over the years, Vaisala has always had strong focus on product development. Majority of Vaisala's product development is located in Finland, as is the sensor factory with its crown jewel, the cleanroom."Vaisala is constantly in the eye of the technological innovation and development. We invest a lot in the product development and also in basic scientific research, which is not very common in the business. The continuous development, in-house expertise, the keen interest in science and technological know-how keeps us on the top of the game", sums Åström.Making Observations for a Better WorldExploring space fosters innovation and international collaboration and understanding the world around us. Investigating Mars is particularly important, as the planet's similarities to Earth could help us better understand the challenges we face on Earth, such as climate change."Vaisala has an authentic interest to make observations for a better world. By exploring a similar type of planet, we can learn something from ourselves, too", Liisa Åström says, and continues: "I believe the whole mankind is involved in these space crusades with curious minds. To me, Vaisala is representing that curiousness; we are always willing to learn, develop and understand the habitat and the environment which we are part of."Read more about the Mars 2020 plans:  https://mars.jpl.nasa.gov/mars2020/http://ilmatieteenlaitos.fi/tiedote/468861651 For further information:

About VaisalaVaisala is a global leader in environmental and industrial measurement. Building on over 80 years of experience, Vaisala provides observations for a better world. We are a reliable partner for customers around the world, offering a comprehensive range of innovative observation and measurement products and services. Headquartered in Finland, Vaisala employs approximately 1,600 professionals worldwide and is listed on the Nasdaq Helsinki stock exchange. www.vaisala.com www.twitter.com/VaisalaGroup 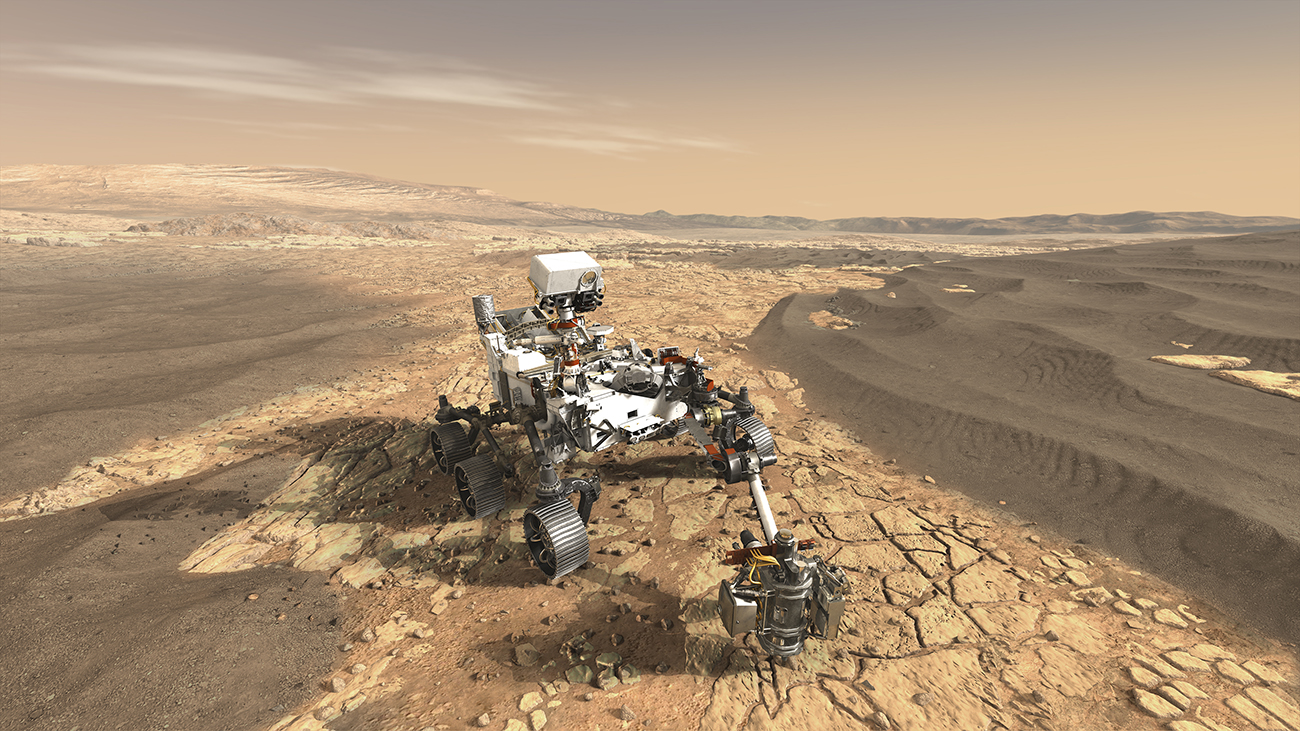 Image Credit:  NASA/JPL-Caltech. This illustration depicts NASA's Mars 2020 rover on the surface of Mars. The mission, targeted for launch in July/August 2020, takes the next step by not only seekingsigns of habitable conditions on Mars in the ancient past, but also searching for signs of past microbial life itself. 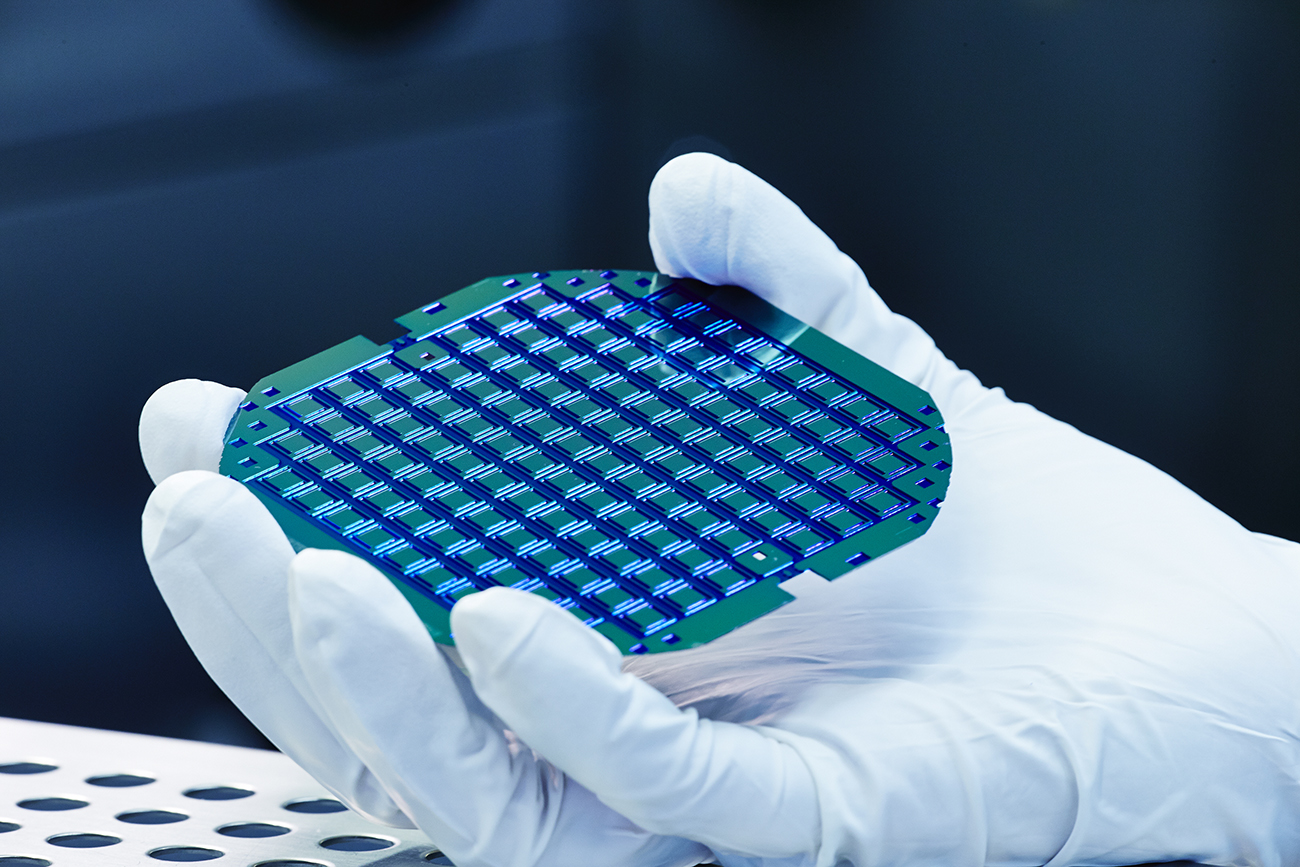