Mountain View, CA –The SETI Institute and the Mars Institute announced today the discovery of small pits in a large crater near the North Pole of the Moon, which may be entrances to an underground network of lava tubes. The pits were identified through analysis of imaging data from NASA’s Lunar Reconnaissance Orbiter (LRO). If water ice is present, these potential lava tube entrances or “skylights” might allow future explorers easier access to subsurface ice, and therefore water, than if they had to excavate the gritty ice-rich “regolith” (surface rubble) at the actual lunar poles.

The new pits were identified on the northeastern floor of Philolaus Crater, a large, 43 mile (70 km)-diameter impact crater located at 72.1oN, 32.4oW, about 340 miles (550 km) from the North Pole of the Moon, on the lunar near side. The pits appear as small rimless depressions, typically 50 to 100 feet across (15 to 30 meters), with completely shadowed interiors. The pits are located along sections of winding channels, known on the Moon as “sinuous rilles,” that crisscross the floor of Philolaus Crater. Lunar sinuous rilles are generally thought to be collapsed, or partially collapsed, lava tubes, underground tunnels that were once streams of flowing lava.

“The highest resolution images available for Philolaus Crater do not allow the pits to be identified as lava tube skylights with 100 percent certainty, but we are looking at good candidates considering simultaneously their size, shape, lighting conditions and geologic setting” says Pascal Lee, planetary scientist at the SETI Institute and the Mars Institute who made the new finding at NASA’s Ames Research Center in Silicon Valley. 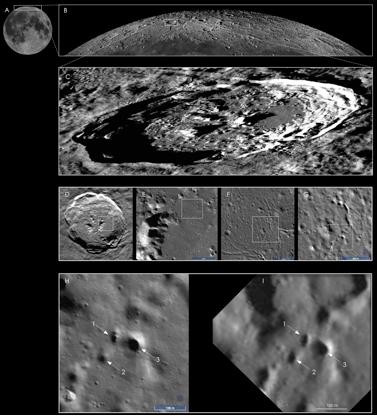 Figure 1: Series of images showing the location of some of the newly discovered lava tube skylight candidates at Philolaus Crater near the North Pole of the Moon (NASA/LunarReconnaissanceOrbiter/SETI Institute/Mars Institute/PascalLee). 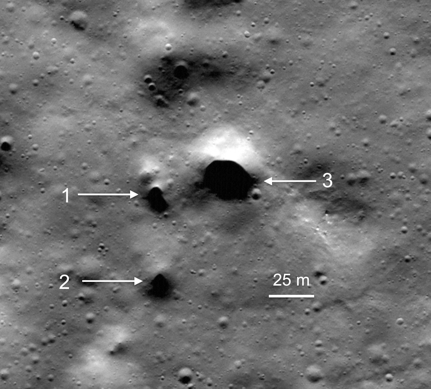 The discovery of the candidate lava tube skylights in Philolaus Crater is being presented by Lee this week at NASA’s Lunar Science for Landed Missions Workshop convened by the Solar System Exploration Research Virtual Institute (SSERVI) at Ames. The meeting aims to examine the range of scientific investigations that could be conducted at a variety of future landing sites on the Moon”.

Prior to this discovery, over 200 pits had been found on the Moon by other researchers, with many identified as likely skylights leading to underground lava tubes associated with similar sinuous rilles. However, today’s announcement represents the first published report of possible lava tube skylights in the Moon’s polar regions.

In recent years, the lunar poles have grown in strategic importance for both science and exploration, as water ice is known to be buried in the lunar regolith in permanently shadowed areas at both poles. But with no known large cavity allowing easy access to the lunar polar underground, and often no nearby access to solar power, extracting water ice scattered in lunar polar regolith presents a substantial challenge.

The new discovery opens an exciting prospect: potentially much easier access to - and extraction of - lunar polar ice. Three factors could help: 1) skylights and lava tubes could provide more direct access to the very cold polar underground, alleviating the need to excavate vast amounts of lunar regolith; 2) if ice is present inside the lava tubes – which is not yet known - it could be in the form of massive ice formations as often occur in cold lava tubes on Earth – instead of mixed-in within lunar grit, and 3) solar power would be available nearby, just outside each skylight.

Philolaus Crater is additionally appealing due to its relatively young age, which would allow studies of the Moon’s more recent evolution. It is one of few large craters formed during the Copernican Era, that is, within the last 1.1 billion years or so of lunar history. Also, being on the near side, Philolaus affords direct communications with the Earth.

“We would also have a beautiful view of Earth. The Apollo landing sites were all near the Moon’s equator, such that the Earth was almost directly overhead for the astronauts. But from the Philolaus skylights, Earth would loom just over the crater’s mountainous rim, near the horizon to the southeast” adds Lee.

“Our next step should be further exploration, to verify whether these pits are truly lava tube skylights, and if they are, whether the lava tubes actually contain ice. This is an exciting possibility that a new generation of caving astronauts or robotic spelunkers could help address” says Lee. “Exploring lava tubes on the Moon will also prepare us for the exploration of lava tubes on Mars. There, we will face the prospect of expanding our search for life into the deeper underground of Mars where we might find environments that are warmer, wetter, and more sheltered than at the surface.”

“This discovery is exciting and timely as we prepare to return to the Moon with humans” says Bill Diamond, president and CEO of the SETI Institute. “It also reminds us that our exploration of planetary worlds is not limited to their surface, and must extend into their mysterious interiors”.