In China, a Cold War-era strategy to ward off foreign enemies has made for some dangerous modern-day conditions. 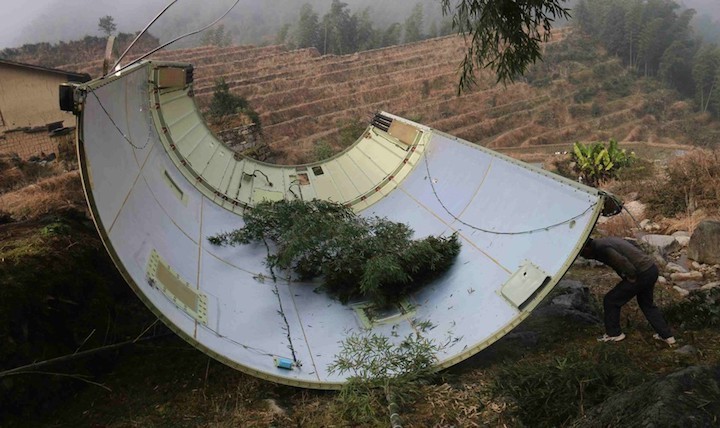 In China, a Cold War-era strategy to ward off foreign enemies has made for some dangerous modern-day conditions.

On Friday morning in China, a rocket blasted off from the Xichang Satellite Launch Center in the Sichuan province with a pair of navigation satellites bound for orbit around Earth. As the rocket climbed higher and higher, the four strap-on boosters that launched with it began to fall away. This is supposed to happen; the boosters provide extra lift in the minutes after launch, and when they burn through their fuel, they separate and fall back down to Earth.

The satellites made it safely into orbit. But back on the ground, there were flames.

One of those four discarded boosters had landed near a town in the Guangxi region and exploded. Video captured by onlookers and shared on social media shows the booster falling from the sky and striking the ground behind buildings. Screams are heard as flames erupt when it makes contact. Other footage shows bystanders approaching the flaming wreckage in a grassy area. Flames billow out from one end of the booster, and the ground is littered with chunks of debris.

The incident, which was first reported by Andrew Jones at GB Times, is actually not uncommon in China. Three of the country’s four launch facilities—Xichang in the Sichuan province, Jiuquan in the Gobi desert in Mongolia, and Taiyuan in the Shanxi province—are located deep inland, hundreds of miles from open water. For China to send satellites and other payloads into space from these spots, rockets must fly over land. The setup contrasts that of the U.S. and other nations that host rocket launches, where facilities are located near the coastline and rockets travel over oceans as they ascend.

China started developing a fleet of expendable “Long March” rockets in the mid-1960s. The program is named for a historic trek across the country by Chinese communists in the 1930s, which led to the emergence of Mao Zedong as their leader until his death in 1976. Several iterations of the rocket have been developed since the maiden launch in 1970, including the Long March 3B that flew on Friday. China designates some areas around their launch facilities as zones for discarded debris, like strap-on boosters. Most of these zones are rural regions. The photo at the top of this story, for example, shows some hardware that fell in a field in the Jiangxi province in December 2016.

Xichang is located in a remote area, but remote doesn’t mean empty. “It’s in the middle of nowhere, and yet, around the launch site, there are villages, there worker’s dorms,” said Joan Johnson-Freese, a national-security affairs professor at the U.S. Naval War College who has studied space security for 20 years.

There were no reports of injuries Friday. Boosters are supposed to exhaust their toxic propellant before they detach, but exposure to them on the ground could still pose some health risks to people who come near, Jones writes. China calculates where launch leftovers might fall and tries to warn nearby residents, but remnants can—and have—struck both people and buildings. In 2015, part of a booster of a Long March 4C rocket struck a house in Shanxi after a launch from the Taiyuan facility, cutting a sizable hole into the roof. In 1996, a Long March rocket carrying a U.S.-manufactured satellite crashed into a hillside 22 seconds after liftoff at Xichang. Xinhua, China’s state-run news agency, reported that the accident killed six people and injured 57, but some suspect the toll was much higher.

“That, in fact, might be a realistic number for the casualties among the technical personnel involved in preparing the mission,” wrote Anatoly Zak, a space journalist, of the official tally, in Air & Space magazine in 2013. “We may never know how many local villagers died, although the numbers could easily have run into the hundreds, which would make the accident the worst disaster in launch history.”

So if launching rockets over land can be so dangerous, why did China build its facilities so far inland?

China built three launch facilities between the 1950s and 1970s, during the Cold War. In 1958, the Jiuquan facility opened as part of Mao’s ambitious plan to match the ballistic-missile capabilities of the Soviet Union and the United States, and the Chinese leader insisted they be as far away from its international borders as possible, out of reach of the enemy, said Johnson-Freese.

No one could have anticipated that a decision to protect a burgeoning rocket industry would someday end up complicating it instead.

The 1996 accident drew widespread criticism from other countries about China’s safety measures for rocket launches, Johnson-Freese said. “They got such international condemnation for this prior accident that they started to pay attention and say, okay, how do Western countries do this? What are the safety standards that we should use?” In the years since, “Chinese safety standards have evolved significantly,” she said.

These days, China picks locations for launch sites based on science, not geopolitics. In 2009, China began construction on its fourth launch site, the Wenchang Space Launch Center. Wenchang is located on the island province of Hainan—right off the coast of the South China Sea. Officials chose the site because it sits just 19 degrees north of the equator, a prime spot for launches because rockets traveling in the same direction of the Earth’s spin get a boost in velocity there. When rockets can launch faster, their operators save money on fuel. Rocket hardware is transported there by ship rather than train, and any falling debris would hit water. Wenchang opened in 2014 and has hosted three successful launches.

The booster incident on Friday is not quite a setback for its Long March program—the payload, two satellites to support the country’s BeiDou navigation system—got where they needed. But the fiery spectacle is not reassuring. The risk of fallen debris in populated areas will only increase as China ramps up launch activities.

The country has steadily increased its annual number of launches into low-Earth orbit in the last 20 years, and has reached more than 15 each year since 2010, according to a comprehensive database maintained by Gunter Krebs, a spaceflight historian in Germany. The China Aerospace Science and Technology Corporation, the country’s main contractor for space development, seeks to test the Long March 9, a super heavy-lift launch vehicle, by 2030. The Long March 9 will be similar in power to the Saturn V, the U.S. rocket that launched Apollo astronauts to the moon, and the Falcon Heavy, the SpaceX rocket preparing for its maiden launch this month. China wants to achieve full reusability for all their launch vehicles by 2035.

The biggest test for the Long March program will come much earlier than that. China has targeted late 2018 to launch Chang’e 4—a combination of a lander and a rover—to the far side of the moon. The mission, if successful, would be a first for humankind. Here’s hoping fiery debris from the launch don’t distract from the moment.