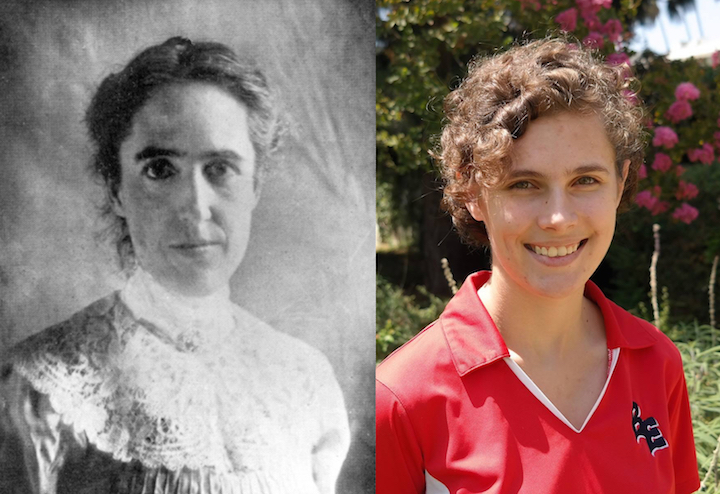 How far away is that galaxy?

Our entire understanding of the Universe is based on knowing the distances to other galaxies, yet this seemingly-simple question turns out to be fiendishly difficult to answer. The best answer came more than 100 years ago from an astronomer who was mostly unrecognized in her time — and today, another astronomer has used Sloan Digital Sky Survey (SDSS) data to make those distance measurements more precise than ever.

“It’s been fascinating to work with such historically significant stars,” says Kate Hartman, an undergraduate from Pomona College who announced the results at today’s American Astronomical Society (AAS) meeting in National Harbor, Maryland. Hartman studied “Cepheid variables,” a type of star that periodically pulses in and out, varying in brightness over the course of a few days or weeks.

The pattern was first noticed in 1784 in the constellation Cepheus in the northern sky, so these stars became known as “Cepheid variables.” Cepheid variables went from interesting to completely indispensable in the early 1900s thanks to the work by astronomer Henrietta Leavitt. Leavitt’s contributions were largely ignored for one simple reason — she was a woman at time when women were not taken seriously as astronomers.

“It’s been fascinating to work with such historically significant stars.”

In fact, when Leavitt was first hired by Harvard College Observatory in 1895, she was hired as a “computer” — a term which meant something completely different from what it means today. In the days before modern computers or even pocket calculators, a “computer” was a person hired to perform complex calculations in their mind, assisted only by pencil and paper. Although the work was demanding, it was not taken seriously by the male professional scientists of the time — it was seen as rote work not requiring intelligence or insight that could be done by anyone, even a woman.

So in 1908 when Leavitt discovered a relationship between the brightness (or “luminosity”) of a Cepheid variable star and the time it took to go through a full cycle of change (its “period”), her work was not immediately recognized for its significance. It took years for the mostly-male astronomy community to realize that this relationship (today known as “the Leavitt Law”) means that measuring the period of a Cepheid variable immediately gives its true brightness — and furthermore, that comparing this to its apparent brightness immediately gives its distance.

Sadly, it was only after Leavitt’s death from cancer at age 53 that astronomers realized that she had found the key to unlocking distances to such stars everywhere — whether in our Milky Way or in a galaxy in the distant Universe.

Using the period-luminosity relationship that Leavitt discovered, others later calculated the distances to Cepheid variables in galaxies outside our own Milky Way. In doing so, they discovered that our Universe is expanding, starting from a single point more than 14 billion years ago at the Big Bang — a discovery that would have never been possible without the discovery of the Leavitt Law.

More than a century later, astronomers like Hartman are carrying on Leavitt’s work. Her announcement came about as a result of a ten-week summer research project at Carnegie Observatories. Hartman worked closely with her research advisor, Rachael Beaton, a Hubble and Carnegie-Princeton fellow now based at Princeton University.

The tool that Hartman and Beaton are using to improve our knowledge of Cepheid variables is the Sloan Digital Sky Survey’s Apache Point Galactic Evolution Experiment (APOGEE), which is systematically mapping the chemical compositions and motions of stars in all components of our Galaxy.

As Beaton explains, “The APOGEE survey is optimized to study the cool, old giant-type stars found all across our galaxy. And while Cepheid variables are younger and larger, they are similar in temperature, so they are well suited for APOGEE.”

The fact that Cepheid variables appear in the APOGEE survey provides an great opportunity to calibrate the Leavitt Law, but also provides a major benefit: it allows astronomers to map young stars in the same way they map old giant stars. Mapping these two types of stars together allows astronomers to connect structures from the ancient galaxy to more recently-formed components. In this way, Cepheid variables can offer tremendous insight into the structure of our galaxy — but such insight comes with complications.

The very property of these stars that allowed Henrietta Leavitt to discover the Leavitt Law – their predictable variations in brightness — creates challenges for APOGEE. “Over a pulsation cycle of a Cepheid variable, the star’s properties change,” says Beaton. “Its temperature, surface gravity, and atmospheric properties can vary greatly over a fairly short time. So how can APOGEE properly measure them? I thought it would be an excellent summer research project to find out.”

The undergraduate to take on the challenge was Kate Hartman of Pomona College in Claremont, California. Hartman was able to demonstrate that it is possible to get consistent measurements of the chemical makeup of Cepheid variables, regardless of when in their cycle they were observed by APOGEE.

Hartman explains, “I had to look at multiple spectra from the same Cepheid variable and measure the amount of different elements in the star. When we looked at a star’s spectrum across its entire pulsation cycle, we found no significant differences in the results. That means that we’re getting reliable results every time we look.”

Knowing that APOGEE can reliably measure Cepheid variables is particularly important, Hartman explains, because it is the first survey to see so many, so regularly, and in so many places. Because APOGEE now operates simultaneously with twin instruments on telescopes in both the Northern and Southern hemispheres, it can see the whole Galaxy, as well as our neighbors the Large and Small Magellanic Cloud. This means that Cepheids can be observed in very different chemical environments, using the same instrument and data analysis process every time.

As a result of Hartman’s findings, additional APOGEE observations of Cepheid variables are now well underway. Jen Sobeck of the University of Washington, APOGEE’s Project Manager, explains, “the survey will observe the most nearby and well studied Cepheids with observations several times a month, will target Cepheids in the Large and Small Magellanic Cloud in January, and plans to eventually target all Cepheids in all parts of the sky we observe. These observations are an important addition to the APOGEE map of the galaxy.”

With direct distances from trigonometric parallaxes to a billion stars in our Galaxy coming soon from the ESA Gaia mission, the APOGEE spectroscopy is the final piece in the puzzle to complete the work started by Henrietta Leavitt in 1908 and provide an accurate calibration of the Leavitt Law in all Cepheid variable stars. And the upcoming Sloan Digital Sky Survey V will provide even better data. With all these new tools at their disposal, astronomers will be able to follow up on the work of astronomers like Leavitt — and Hartman — for generations to come.

About the Sloan Digital Sky Survey

Funding for the Sloan Digital Sky Survey IV has been provided by the Alfred P. Sloan Foundation, the U.S. Department of Energy Office of Science, and the Participating Institutions. SDSS acknowledges support and resources from the Center for High-Performance Computing at the University of Utah. The SDSS web site is www.sdss.org.