Steve Bennett has been reaching for the stars since he watched the first Moon landing as a boy. Now Manchester’s rocket man tells Dean Kirby he is getting close to launching his own manned spaceflight. Steve Bennett was five years old in 1969 when Neil Armstrong walked on the Moon. Unlike the millions of other boys and girls who were enthralled by the Apollo 11 space mission he has dedicated his life to chasing the stars. The 53-year-old self-taught rocket engineer has launched around 20 big rockets including Nova 1 – the largest ever flown from the UK mainland – since starting his company, Starchaser Industries, 20 years ago. He is now taking on the likes of Richard Branson and Elon Musk in the race to make space tourism an affordable reality. As he gives i a tour of the Starchaser space centre on an industrial estate near the M67, Bennett reveals he is getting close to launching his first manned suborbital mission. One of things I tell kids when I go into schools is to follow their dreams,“ says Bennett. ”When I was their age, I dreamed about flying rockets. I followed that dream and it came true. If you work hard enough, you can get there. Steve Bennett, rocket engineer “I’ve launched the biggest rockets from the UK and tested some of the biggest rocket engines,” he says. “We’ve even done tests using manned space capsules. We haven’t flown anybody in one of the rockets yet. But we’re getting close, very close.” So far only an exclusive club of multi-millionaires has had the privilege of becoming space tourists, paying the Russian Space Agency around £14m each for the luxury of visiting the International Space Station. But US firms including Blue Origin, set up by Amazon founder Jeff Bezos, SpaceX, founded by PayPal creator Musk and Branson’s Virgin Galactic are all striving to make recreational spaceflight more affordable. Bennett’s own journey to the stratosphere has taken a rather different trajectory to that of Musk, whose personal wealth is estimated at more than £14bn. The Mancunian began by making rockets in his back garden as a teenager. “My first rockets were just a few centimetres tall,” he says opening the door to the rocket workshop, which is full of nose cones, fins and a space capsule. Back in the pre-internet 1970s he struggled to get hold of rocket-building books. “It was trial and error,” he says. “Sometimes they worked and sometimes they didn’t. ‘I launched a rocket in the back garden and it set fire to my dad’s shirt’ ”I launched a rocket in the back garden and it set fire to my dad’s shirt on the washing line. My parents saw the funny side. Over the years the rockets got bigger and better.“ After spending three years in the army and working in a laboratory at Colgate testing soap and toothpaste, Bennett became a lecturer in space technology at the University of Salford, which supported his early rocket-making program. Tate and Lyle also sponsored an early rocket which was powered by sugar. His rockets now run on a rubber-based propellant – the same fuel once used in the Space Shuttle’s rocket boosters. He gave up the day job to work on rockets full-time in 1992, before setting up Starchaser six years later. His work is now supported by the University of Chester, whose students analyse the rocket data. ”We’ve built all kinds of rockets, we’ve built space capsules and tested them. We threw one out of the back of a plane at about 10,000ft with somebody inside and they deployed a big parachute and brought it back to Earth. Some of our smaller rockets have gone supersonic. “The biggest rocket we have launched was Nova 1 back in 2001. It was nearly 40 ft high and the largest rocket ever flown from the UK. It was bigger than anything the UK government or firms like Rolls Royce or BAe have launched and our little team built it and flew it.” 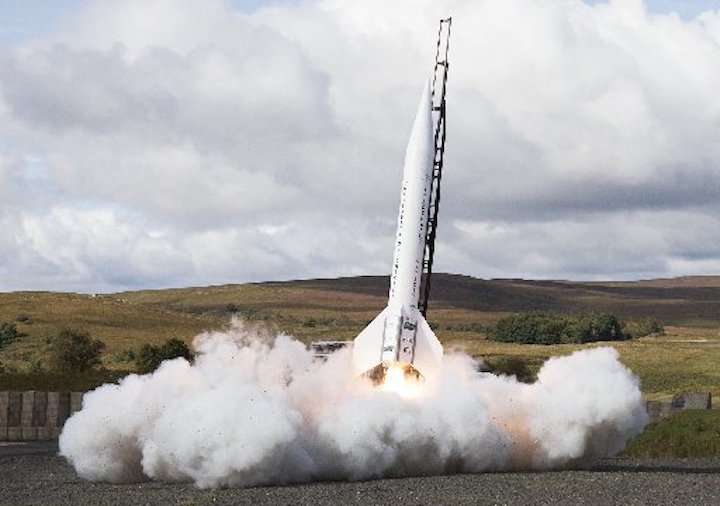 A Starchaser Industries rocket lifts off. (Photo: Leigh Anderson) Another Bennett rocket, Starchaser 3A, reached an altitude of 20,000ft. The UK’s airspace is so congested that it is difficult to find a spot with no air traffic and where they can be safely brought back to Earth. He says the only differences between Starchaser and companies such as SpaceX are scale and investment. “They have the same pressures,” he says. “I’m sure when they’re about the launch a rocket the same worries go through their heads.” Starchaser has 20 acres of land near Spaceport America in New Mexico, the world’s first commercial spaceport, where rockets will one day be launched into space. “We’re hoping to go all the way up into space from there,” says Bennett. “We’re working towards a system that can carry people up 100km. It’s a sub-orbital flight. We’re not going to go into orbit – just straight up and down again. It’s very simple. ”The whole flight will take half an hour. People on board will experience weightlessness. They will see the curvature of the Earth and the sky will turn black. For a few minutes, they really and truly will become astronauts.” Starchaser’s market research suggests seven out of 10 people would go into space if it was affordable and as safe as flying on a plane. He says the boom in space travel will mirror the dot.com boom of the 1990s. “You have a handful of companies doing good things – and Starchaser is among them – and the space frontier is going to open up. “Space tourism used to be a dirty word in places like NASA, but it’s only a few years away.” ‘I do this because one day I want to fly in space’ The engineers at Starchaser are all volunteers. Bennett is looking to recruit more young people to help him build rocket ships. One volunteer who started aged 14 is now building rockets while doing his A-Levels. More than 500 people have reserved seats on future Starchaser flights and Steve is looking for investment to keep his adventure going. ”I’m doing this because one day I want to fly in space. If I’m still fit and healthy enough, then I will. I know we will get there,“ he tells i. But the father-of-two says one of his greatest aims is to inspire the astronauts of the future. Starchaser Industries takes rockets into 200 schools each year to try to encourage young people to get involved in science. ”One of things I tell kids when I go into schools is to follow their dreams,“ says Bennett. ”When I was their age, I dreamed about flying rockets. I followed that dream and it came true. If you work hard enough, you can get there.“
Quelle: News The Essential Daily Briefing