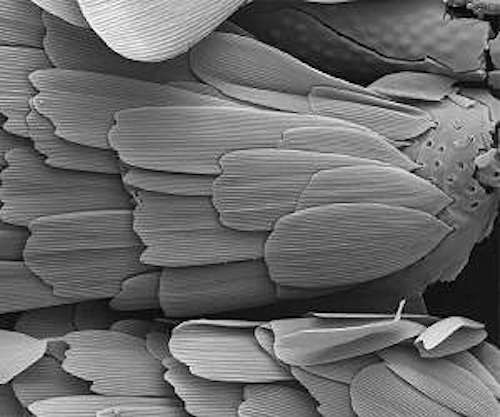 Example of a living representative of a primitive moth belonging to the Glossata, moths that bear a proboscid adapted for sucking up fluids, including nectar. Size of the scale bar is 1 cm.

Visiting a colleague in Germany in 2012, Boston College Research Professor Paul K. Strother was examining soil samples for pollen, spores, pieces of plants and insect legs - organic debris that might otherwise have been considered "pond scum" when it was trapped in sediment during cataclysmic earth events 200 million years ago.

The slides of rock samples drilled in the German countryside included some material that looked familiar to Strother, a Department of Earth and Environmental Sciences researcher at Boston College's Weston Observatory, who studies the origin and early evolution of land plants. What he saw were features similar to those found in insect wings.

The wrinkle was that these types of moths and butterflies - known as Lepidoptera - were long posited to have evolved 50 to 70 million years later, during the Cretaceous period when the first flowering plants emerged as their prime food source.

"The consensus has been that insects followed flowers," said Strother, a co-author of "A Triassic-Jurassic window into the evolution of Lepidoptera," a new report published in Science Advances.

"But that would be 50 million years later than what the wings were saying. It was odd to say the least, that there would be butterflies before there were flowers."

Five years later, Strother and colleagues from natural history museums in Germany and a university in the Netherlands have developed a scientific case showing the Lepidoptera evolved earlier than previously established - emerging during the Jurassic period.

Absent flowers, the researchers report, primitive moths and butterflies, known as the Glossata, developed the physical attributes - namely the sucking proboscis - to find nutrition by drawing off water droplets from the tips of immature gymnosperm seeds.

"What we've found is that these butterflies and moths with mouth parts were feeding on pollen droplets of gymnosperm seeds - from conifers related to pines, seed plants without fruits and flowers. They were feeding off the cone-borne seeds - mainly as a source of water," said Strother.

Even Charles Darwin called the mysterious evolution of flowering plants "an abominable mystery." Scientists have reckoned that flowering plants preceded the insects that fed off of them. But researchers have gradually started to piece together evidence that moths and butterflies existed earlier than the Cretaceous period, which began 145 million years ago.

The team's findings shed new light on the classic example of co-evolution: the evolutionary interplay between pollenating insects - flies, bees, wasps, butterflies and moths - and angiosperms, or flowers, Strother said.

"Our discovery does not change this, but instead, it demonstrates that the Glossata - which gave rise to the Lepidoptera - evolved earlier by a feeding adaptation to the gymnospermous ovules, or the pollen droplets," said Strother.

"These insects later transferred their feeding preference onto angiosperms, and, as a result, ended up co-evolving with flowers where they function to transfer pollen as they feed on nectar."

Developing a clearer picture of insect evolution had proved elusive because much of what is learned from ancient rock, soil and fossils comes from earth once covered by oceans, said Strother. Moths and butterflies lived over land masses. In addition, their delicate features were prone to deterioration prior to fossilization.

Utrecht University paleontologist Bas van de Schootbrugge and colleagues assembled a portfolio of samples containing fossilized remains of moths and butterflies to carefully establish the presence of Lepidoptera in earth samples from a region where the cataclysmic transition between Triassic and Jurassic is preserved in rock.

The mass extinction event 201 million years ago wiped out an estimated 35 percent of all species, which makes the survival and diversification of Lepidoptera all the more remarkable.

In 2012, Strother was examining the sample slides looking at algae, fungi and soil microorganisms.

"These are organic extractions after you've dissolved away the minerals in the samples and you're looking at anything that is organic. There are pollen and spores. There are other things. Pieces of plant cuticles. Resistant organic material. Insect legs. Ninety-nine percent is plant debris.

"It's basically pond scum," said Strother, referring to the film of debris that can sit atop a pool of standing water. Part of what Strother saw looked similar to insects from another era, he said.

The project required linking a range of evidence, akin to a scientific detective story, said Strother.

"This is the old-fashioned science of discovery," said Strother.

"We're looking at this microscopic world of things that lived hundreds of millions of years ago and we don't know what they are. The challenge is: can we figure out what they are? Part of it is piecing together the tree of life, or the evolution of organisms through time. It is more like a puzzle or a mystery."