For the first time, high-resolution images show the three-dimensional structure of massive ice deposits on Mars. According to an in-depth analysis led by the USGS, the images reveal never-before-observed details about the ice sheets, including that some begin just a few feet below the Martian surface and extend to depths greater than 300 feet.

The study, published in Science today, shows there is low rock and dust content in the exposed ice. This means that relatively pure water ice, capped by only a thin layer of ice-cemented rock and dust, may be readily accessible to future exploration missions.

“There is ice under roughly a third of the Martian surface, which records the recent geologic history of Mars,” said USGS scientist and lead author of the study, Colin Dundas. “What we’ve seen here are cross-sections through the ice that give us a 3-D view with more detail than ever before. Having this degree of detail is an important contribution to the growing body of knowledge about conditions on Mars.” 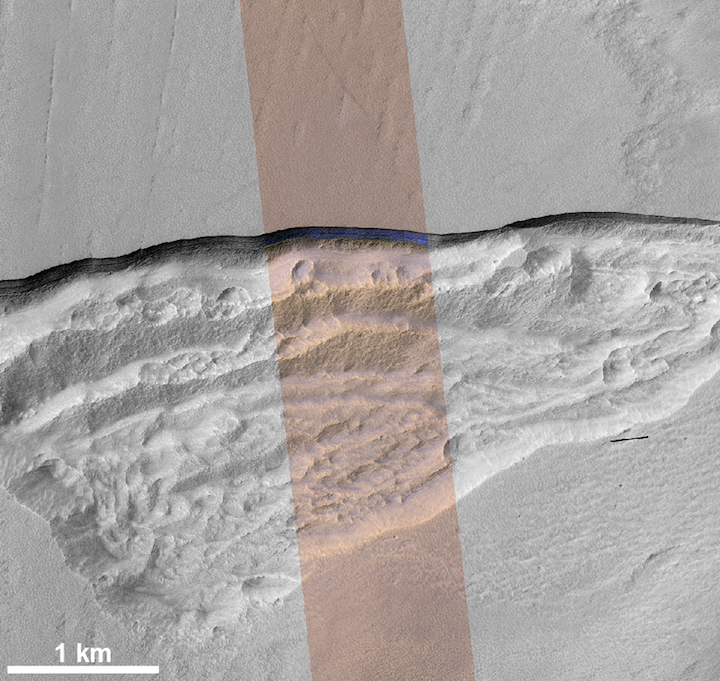 This NASA HiRISE image shows an icy scarp on Mars in the context of a broader area.
Credit:NASA/JPL/University of Arizona/USGS

Although water ice deposits are known to exist from previous Mars missions, this new study analyzed the vertical structure and thickness of ice sheets using high-resolution imagery and topography from the HiRISE instrument on NASA’s Mars Reconnaissance Orbiter. The study examined north and south pole-facing erosional slopes, known as scarps, in eight locations around Mars, all in the mid-latitudes. These scarps are thought to be formed by a process called sublimation, where ice is lost to the atmosphere by transformation into water vapor without ever turning into liquid.

Similar to ice cores recovered from the Earth’s surface, these ice sheets may preserve a record of ice deposition and past climate on Mars. Images of the erosional scarps reveal geologic features of the ice, such as banded patterns and color variations due to layering. Such details suggest ice layers with different proportions of ice and dust that could have formed under varying climate conditions.

While NASA leads space exploration for the United States, the USGS has a long and rich history of assisting NASA with space exploration missions and planetary mapping. Specifically, the USGS Astrogeology Science Center in Arizona is a national resource for the integration of planetary geoscience, cartography and remote sensing. The center was established in 1963 to provide lunar geologic mapping for NASA and assist in training astronauts destined for the Moon. Throughout the years, the USGS has participated in processing and analyzing data from numerous missions to planetary bodies in our solar system, and collaborates with the planning and operation of space exploration missions. 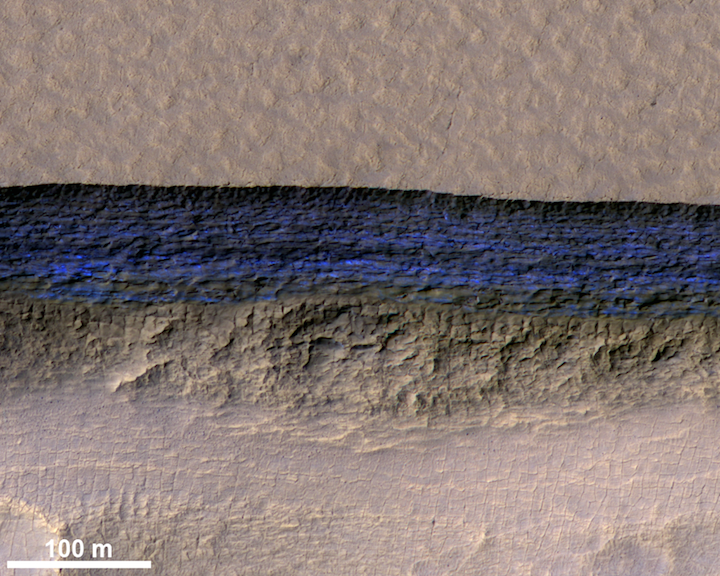 This high-resolution NASA HiRISE image shows a detailed subsection of an icy scarp on Mars in enhanced color.
Credit: NASA/JPL/University of Arizona/USGS