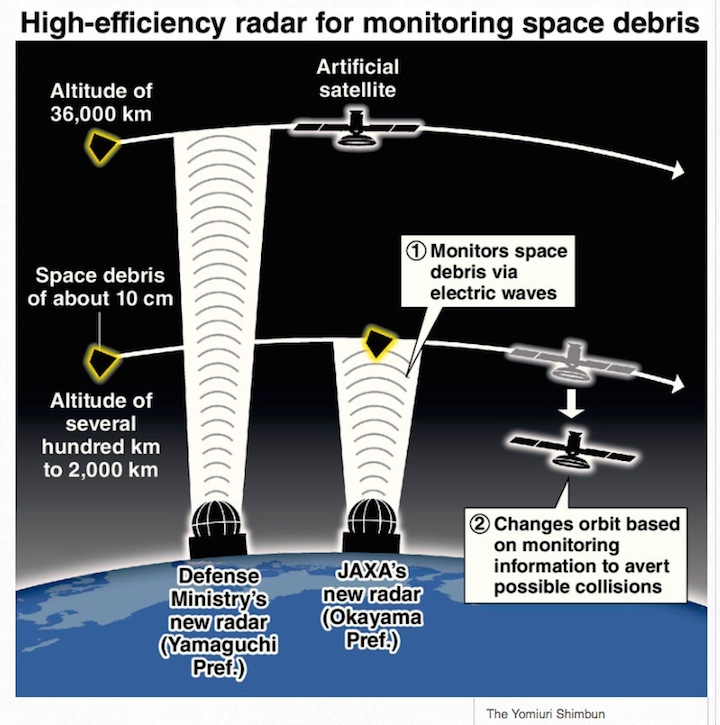 The Japan Aerospace Exploration Agency (JAXA) will start developing a new high-efficiency radar system in fiscal 2018 to monitor space debris as small as about 10 centimeters, as part of its efforts to avoid collisions between debris and artificial satellites, according to sources.

JAXA plans to begin full-scale operations of the new radar as early as fiscal 2023 in cooperation with another radar system separately designed by the Defense Ministry, the sources said.

The agency currently uses a radar system deployed in Okayama Prefecture to monitor space debris that travels over Japan in low Earth orbit at an altitude of several hundred to 2,000 kilometers. However, the current system only covers debris that is 1.6 meters across or larger. It cannot track particles of about 10 centimeters, which comprise the majority of space debris.

JAXA is to build the new radar system adjacent to the existing one. The agency aims to achieve 200 times the detection capability of the current radar, by significantly increasing the output of electric waves cast onto space debris and utilizing a processing technology for special signals.

As a result, JAXA will be able to monitor about 10-centimeter-sized space objects in low orbit, where many Earth observation satellites and others travel, they said.

If data analysis suggests the possibility of collisions between space debris and JAXA’s about 10 satellites operating in low orbit, the agency will use the new system to change the satellites’ orbit from the ground by remote control.

The Defense Ministry is also preparing to install a radar system in Yamaguchi Prefecture to monitor space debris in stationary orbit at an altitude of about 36,000 kilometers. Satellites traveling in stationary orbit include communication and meteorological satellites that are important for activities of the Self-Defense Forces.

JAXA intends to create a system in fiscal 2023 to monitor space debris pieces by using two radars in cooperation with the ministry as well.

The number of pieces of space debris — including broken pieces of artificial satellites whose operations were terminated, and wreckage from rockets — has been increasing yearly with the progress of each country’s space development.

About 20,000 space debris particles that are larger than 10 centimeters are mainly in low orbit.

In 2009, a U.S. satellite collided with a defunct Russian satellite, which sent the U.S. satellite out of control. In 2011, space debris objects approached the International Space Station, forcing ISS astronauts to take shelter temporarily to a spacecraft returning to Earth.

The U.S. Defense Department constantly monitors space debris using radar systems installed in various parts of the world, providing information of this kind to Japan as well. There were five cases in fiscal 2016 in which JAXA changed the orbit of its satellites based on information provided by the United States, according to the agency.

In 2016, the government specified in the basic space policy its plan to step up monitoring space debris from the viewpoint of national security.

“It’s necessary to formulate a system to protect Japan’s important satellites without depending on the United States. Our planned new radar will become the first step for this purpose,” said Mayumi Matsuura, a project manager of JAXA.