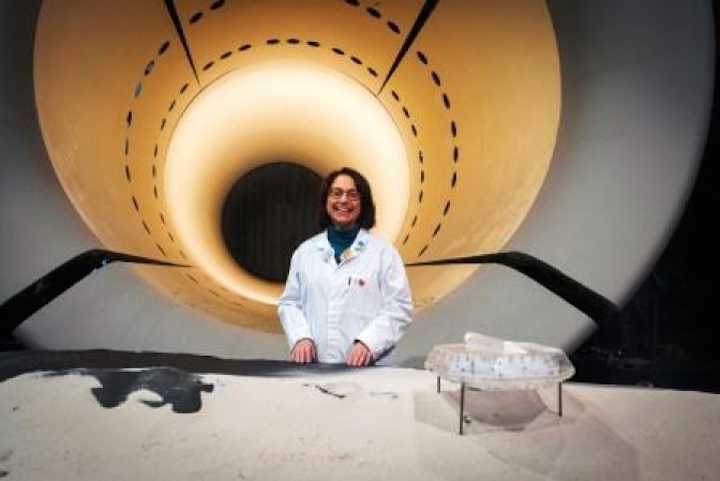 Nothing can be farther away from each other than space and Antarctica but living conditions appear to be similar. Professor Sarah Baatout leaves today (Saturday) for a long journey to the Belgian polar station in Antarctica to study the response of the human body to extreme conditions.
As previously reported, the 2017 - 2018 scientic season at Princess Elisabeth Antarctica Research Station has just begun.

Sarah Baatout, head of the radiobiology unit at the Belgian Nuclear Research Centre (SCK•CEN) and guest professor in bio-engineering at Gent University, will join a team of 12 researchers of Belgian and other nationalities at Cape Town and from there continue to Antarctica. There they will carry out an interdisciplinary biomonitoring project for one month.

SCK•CEN with more than 700 employees is one of the largest research centers in Belgium and deals with peaceful applications of radioactivity, including safety of nuclear installations and management of radioactive waste. For many years it has also worked on the protection of astronauts during space travel.

“We are currently following astronauts who spend 6 months or more in the International Space Station. We study their immune response since the immunity defense system gets weaker in extreme environments,” explains Sarah.

“Antarctica is an excellent place studying the effects of isolation, confinement, communication difficulties, monotonous environment, workload, sleep disturbances, and limited access to fresh food. We can study a group of people in good physical condition and compare them with astronauts living in similar conditions.”

She will take several kinds of samples such as blood before, during and after their stay in Antarctica. The samples will be analysed at the station and in SCK•CEN’s laboratories. In parallel the stability of 20 different medicines which might be used in the medical kit of astronauts will also be studied.

Finally, the influence of spirulina on health will be investigated. Spirulina is an eatable bacterium which is given as a food supplement. It contains various antioxidants and vitamins and can easily grow in space. In the next few days SCK•CEN is sending a spirulina bioreactor to the International Space Station, says Sarah.

She tells The Brussels Times that her visit to Antarctica required months of intensive preparations.

“We are so grateful to be able to carry out our project and hope to be able to run an excellent research that will contribute to our understanding of how it is live in extreme environments such as space and Antarctica.”

Whilst in Antarctica, Sarah will be in touch every day via internet with schools in Belgium and abroad. “We hope that our experiment will stimulate young persons to study and enjoy science and become the scientists of tomorrow.”
Quelle: The Brussels Times
Raumfahrt - Belgian researcher leaves to study space travel in Antarctica
« Zum vorherigen Eintrag Zum nächsten Eintrag »
1592 Views
Created with page4