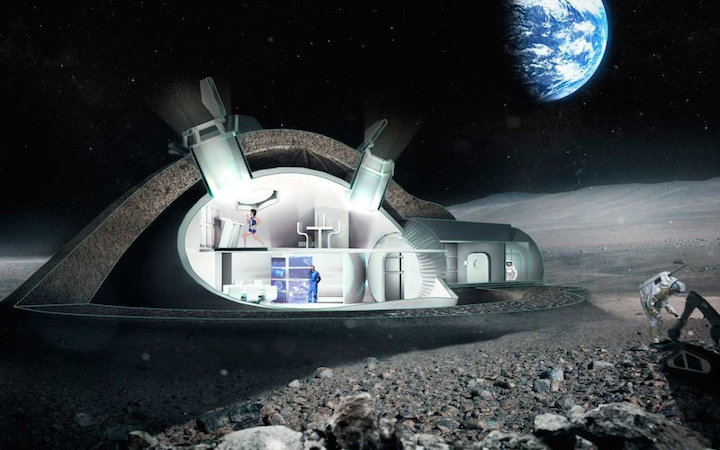 The European Space Agency is studying ways to build a "moon village" using 3D printing. Here’s an artist’s illustration of one concept.

Human settlement of the moon may go through Hawaii.

Earlier this month, an International MoonBase Summit (IMS) brought together representatives from academia, government and the private sector to help lay the groundwork for a base on the lunar surface.

"Because of its geography, geology and culture, Hawaii is the perfect place to build a MoonBase prototype," said Henk Rogers, an entrepreneur based in Hawaii and the organizer of the IMS.

Working groups at the Summit, which was held from Oct. 1 through Oct. 5 on Hawaii's Big Island, focused on addressing key issues in the areas of:

Meeting participants included Apollo 11 moonwalker Buzz Aldrin. During his keynote address, Aldrin encouraged the development of the International MoonBase as a valuable gateway to Mars.

Three key decisions resulting from the summit are:

A master plan, scheduled to be drafted in the spring of 2018, will also include a large number of issues that will be the subject of trade studies in the months ahead.

Furthermore, a 3D model of the International MoonBase is in development; that model will provide the public with a high-fidelity look at the layout of the base.

For more information on the project, visit: https://moonbasealliance.com/

Mahalo for your Participation in the first International MoonBase Summit (IMS).

“We will build a MoonBase to enable humankind to take the next steps towards becoming a sustainable, vibrant multi-planetary species.” -Henk Rogers

About the International MoonBase Summit

The International MoonBase Summit (IMS) convened a team of leading scientists, educators and entrepreneurs, from space agencies and industries worldwide, to advance the development and implementation of an international base on the Moon.

The goal of the International MoonBase Summit was to create an action plan culminating with the building of MoonBase prototypes on Earth, followed by a sustainable settlement on the Moon.  IMS delegates focused on identifying essential resources and technological capabilities required to enable and sustain lunar-based operations. Through the promotion of international collaborations and public-private partnerships we are reducing costs, enhance benefits and accelerate timetables for lunar settlements.

IMS built upon previously held discussions and recommendations from the Lunar Exploration and Analysis Group (LEAG), the European Lunar Symposium, the International Space Development Conference, the NewSpace Symposium, the International Astronautical Congress (IAC), and other space forums worldwide, to formulate an integrated strategy for establishing the proposed multinational lunar base.  We are also demonstrating why Hawaii is one of the best places on Earth to develop a prototype Moon Base.

IMS is concluding with the formation of an International MoonBase Alliance (IMA), comprised of representatives from our Summit working groups.  IMA will continue to pursue the resources and milestones identified during the Summit, as well as oversee and facilitate the design and development of a prototype lunar base in Hawaii to both enable and support international operations on the Moon.