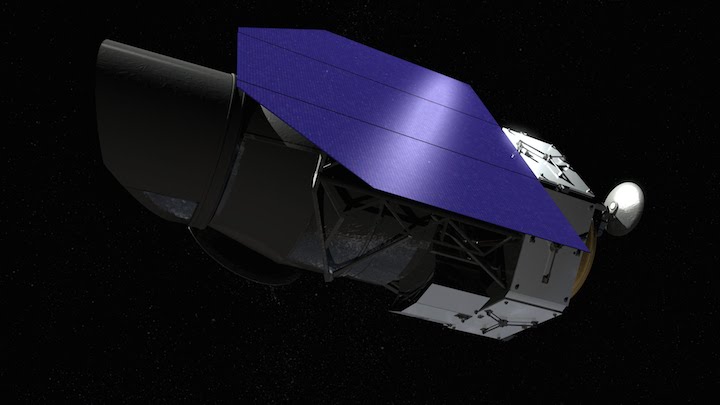 Speakers from NASA, the Search for Extra-Terrestrial Intelligence Institute (SETI) and the Space Telescope Science Institute talked at South by Southwest on Tuesday about the new WFIRST telescope. Specifically, they discussed using the telescope to study how the mysterious force dark energy is causing the universe to expand and to discover new planets and alien life.

The WFIRST telescope, originally used by the United States for spying, was recently donated to NASA by the Department of Homeland Security. The telescope is currently being tweaked by NASA engineers for use in space. Once completed, the telescope will boast a field of vision one hundred times larger than that of the Hubble telescope while maintaining the same image clarity.

“Dark energy will eventually result in the Big Rip and as the universe expands faster… the fabric of space time is ripped apart,” Rhodes said.

Before that happens, researchers will use WFIRST to study dark matter and dark energy in three ways: they will measure the shapes and growths of galaxies to map dark matter, they will find the positions of galaxies to construct a “cosmic standard ruler” with which to study the universe’s expansion and they will discover supernovae to estimate the distance between galaxies.

Researchers will also use the telescope to search for exoplanets, or planets residing outside of our solar system, and other life forms. Margaret Turnbull of the SETI Institute said they will start by looking at the brightest and closest exoplanets.

“We may be one of a billion in habitable worlds in the galaxy and the universe, but everything we look at is unique,” Turnbull said. “No two stars are the same, no two planets are the same.”

Rhodes said that he hopes the WFIRST telescope will help astrophysicists gain a better understanding of the universe.

NASA has received the report from an independent, external review of the Wide Field Infrared Survey Telescope (WFIRST) project. The review was commissioned by NASA to help ensure that the mission is well understood in terms of scope and required resources, and is executable.

In response to the report’s findings, NASA is studying modifications to the WFIRST project. The results of the external review and the modifications being considered are summarized in a memorandum, available here:

Reply to Attn of:

I thank you, the entire WFIRST team, and everyone at GSFC who has worked on this mission. WFIRST is the top priority ofthe National Academy ofSciences' 2010 Decadal Survey for Astronomy and Astrophysics. It is designed to conduct groundbreaking investigations in dark energy and exoplanet research. NASA initiated the project in 2016 with a mission design that would be as sensitive as the Hubble Space Telescope, but have 100 times its field ofview. The National Academy's 2016 Midterm Assessment Report affirmed WFIRST's scientific promise, and cautioned N A S A against allowing the cost o f the mission to affect the balance o f projects and research investigations across NASA's astrophysics portfolio. Accordingly, the Midterm Assessment Report recommended that ''NASA should commission an independent technical, management, and cost assessment" ofthe project.

In response to this recommendation from the National Academies, I established the WFIRST Independent External Technical/Management/Cost Review (WIETR) in April 2017, near the end ofWFIRST's Phase A. The motivation behind the independent review was to validate that the requirements for the mission are aligned with the resources available and are executable. I commend the WFIRST team for proactively supporting the independent review and providing them with the information needed to complete their work.

I have been briefed on the results ofthe independent review. The key findings ofthe independent review team include that the WFIRST surveys program and system design offer groundbreaking and unprecedented survey capabilities for dark energy, exoplanet, and general astrophysicsscience. TheindependentreviewalsofoundthattheWFIRSTteamisvery experienced and has done a considerable amount o f work for a project that has yet to enter Phase B,particularlyinareasthatminimizedevelopmentriskandcostrisk. Keyprocessesforproject execution and control are in place, and the science and mission system concepts are mature. They also noted that the WFIRST Project has been methodical, thorough, and inclusive in the analysis and derivation ofthe science requirements and corresponding technical and data requirements.

The independent review also found that a series of decisions by NASA set boundary conditions for the Project for an approach and mission system design that is more complicated than originally anticipated in terms of scope, complexity, and the concomitant risks of implementation. Forexample,theynotedthatthecoronagraphinstrumentteamhasmade remarkable progress toward advancing technology, but they also concluded that accommodation o f the coronagraph instrument has been one o f the mission system design and programmatic drivers, and that it is certain to present risks to the primary mission well into the verification and validation program.

The independent review found that the management agreement signed at the beginning ofPhase A for the WFIRST life-cycle cost and the budget profile provided as guidance to the Project are inconsistent with the provided funding profile, added scope and requirements, and the appropriateriskclassificationforthemission. TheWFIRSTproject'slatestlifecyclecost estimate for the mission of$3.6B (as compared to the earlier of$3.2B) was validated by the independent review team.

The independent review team also noted that NASA should consider adding engineering development hardware, spare hardware and additional analysis to provide a more robust program thanthestandardClassBriskclassificationfortheWFIRSTmission. Theconcernisthata standard Class B mission is not consistent with the uniform application ofNASA policy for strategically important missions with comparable levels ofinvestment and risks, most ofwhich are Class A missions. In light oftheir findings, the independent review team felt that NASA should conduct a top-to-bottom cost-benefit assessment to balance scope, complexity, and the available resources, and that this should be done in advance ofthe Systems Requirements Review/Mission Design Review (SRRIMDR) which serve as the gateway to Phase B. They suggested that NASA should relook at the Headquarters-to-Program governance structure to establish clarity in roles, accountability, and authority.

I have reviewed the findings ofthe independent review team and have accepted them. As a result, I believe reductions in scope and complexity are needed.

I am directing the Goddard Space Flight Center to study modifying the current WFIRST design, the design that was reviewed by the WIETR, to reduce cost and complexity sufficient to have a cost estimate consistent with the $3.2B cost target set at the beginning ofPhase A.

The following constraints and changes are directed to begin this design modification study:

The modified WFIRST design being studied will still be capable ofmeeting and exceeding the science priorities set for WFIRST by the 2010 Decadal Survey in Astronomy and Astrophysics. The WFIRST project and GSFC Center management should plan to report the results ofthis study at the SRRIMDR in February 2018, in time to support a Key Decision Point-B (KDP-B) Directorate Program Management Council in March or April2018. In advance ofKDP-B, an independent cost assessment will be conducted to validate the estimated cost as being consistent with the $3.2B cost target.

I am directing Dr. Paul Hertz, the Director ofthe Astrophysics Division, to work with you to establish a WFIRST management process consistent with the findings ofthe WIETR report, that will result in a more interactive relationship, shortening the time to make decisions and reduce cost. In addition, we will be providing a revised budget profile for the WFIRST Project.

Ifthe result ofthis study is the conclusion that WFIRST cannot be developed using the current 2.4m telescope architecture within the $3.2B cost target, I will direct a follow-on study ofa WFIRST mission consistent with the architecture described by the Decadal Survey.

WFIRST remains NASA's highest priority for a large astrophysics mission following the James Webb Space Telescope. Making these adjustments to WFIRST in response to the fmdings in the WIETR report will ensure its success while preserving a balanced Astrophysics program.

“NASA thanks this prestigious and highly-experienced team for their work; this report is as thorough and thoughtful as we hoped,” said Thomas Zurbuchen, associate administrator for NASA’s Science Mission Directorate at Headquarters, Washington. “We are taking the report’s findings and recommendations very seriously as we think about the future of this exciting mission.”

WFIRST is the top priority of the National Academy of Sciences’ 2010 Decadal Survey for Astronomy and Astrophysics.  It is designed to conduct groundbreaking investigations in dark energy and exoplanet research. NASA initiated the project in 2016 with a mission design that would be as sensitive as the Hubble Space Telescope, but have 100 times its field of view. The National Academy's 2016 Midterm Assessment Report affirmed WFIRST's scientific promise, and cautioned NASA against allowing the cost of the mission to affect the balance of projects and research investigations across NASA’s astrophysics portfolio. Accordingly, the Midterm Assessment Report recommended that “NASA should commission an independent technical, management, and cost assessment” of the project.

The review was initiated in April 2017, with an independent team consisting of senior engineers, scientists, and project managers external to the WFIRST project. After their first meeting in July, the team members conducted several site visits and scrutinized NASA's approach to WFIRST in great detail, before presenting NASA with their report.

Key conclusions of the report will be presented to the Space Studies Board’s Committee on Astronomy & Astrophysics (CAA) on 10/25/17.