You can see that from here 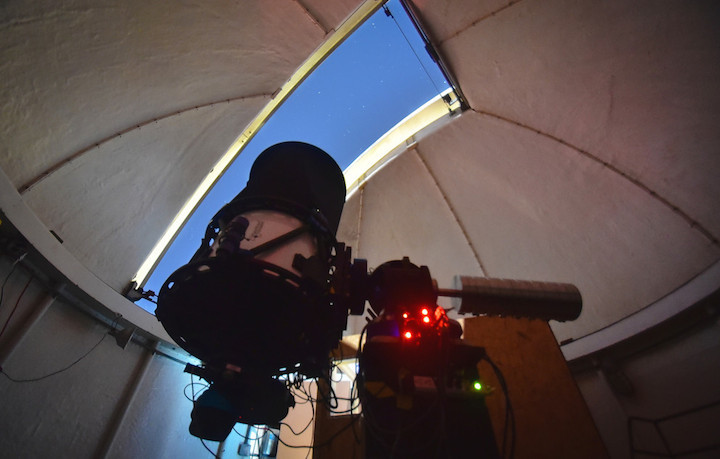 UNIVERSITY PARK, Pa. — A new, low-cost attachment to telescopes allows previously unachievable precision in ground-based observations of exoplanets — planets beyond our solar system. With the new attachment, ground-based telescopes can produce measurements of light intensity that rival the highest quality photometric observations from space. Penn State astronomers, in close collaboration with the nanofabrication labs at RPC Photonics in Rochester, New York, created custom “beam-shaping” diffusers — carefully structured micro-optic devices that spread incoming light across an image — that are capable of minimizing distortions from the Earth’s atmosphere that can reduce the precision of ground-based observations. A paper describing the effectiveness of the diffusers appears online on Oct. 5, in the Astrophysical Journal.

“This inexpensive technology delivers high photometric precision in observations of exoplanets as they transit — cross in front of — the bright stars that they orbit,” said Gudmundur Stefansson, graduate student at Penn State, NASA Earth and Space Science Fellow, and lead author of the paper. “This technology is especially relevant considering the impending launch of NASA’s Transiting Exoplanet Survey Satellite (TESS) early in 2018. It is up to ground-based facilities to rapidly and reliably follow-up on candidate planets that are identified by TESS.”

A team of astronomers led by researchers at Penn State have developed beam-shaping diffusers – small pieces of etched glass that can be mounted on telescopes – that increase the quality of ground-based photometric observations. The research team tested the diffusers on the ARC 3.5m Telescope at Apache Point Observatory in New Mexico (left), the 5m Hale telescope at Palomar Observatory (middle), and the 0.6m telescope at Davey Lab Observatory at Penn State (right).

Diffusers are small pieces of glass that can be easily adapted to mount onto a variety of telescopes. Because of their low cost and adaptability, Stefansson believes that diffuser-assisted photometry will allow astronomers to make the most of the information from TESS, confirming new planet candidates from the ground.

“Beam-shaping diffusers are made using a precise nanofabrication process,” said Suvrath Mahadevan, associate professor of astronomy and astrophysics at Penn State and an author of the paper, “where a carefully designed surface pattern is precisely written on a plastic polymer on a glass surface or directly etched on the glass itself. The pattern consists of precise micro-scale structures, engineered to mold the varying light input from stars into a predefined broad and stable output shape spread over many pixels on the telescope camera.”

Left: Light from a laser pointer is shaped into a wide and stable output using a beam-shaping diffuser. A carefully designed pattern is precisely molded into plastic polymers or directly into a glass substrate, creating micro-structures on the surface of the diffuser (inset). Right: The diffuser installed at the ARC 3.5m Telescope at Apache Point Observatory.

The research team tested the new diffuser technology “on-sky” on the Hale telescope at Palomar Observatory in California, the 0.6m telescope at Davey Lab Observatory at Penn State, and the ARC 3.5m telescope at the Apache Point Observatory in New Mexico. In all cases, images produced with a diffuser were consistently more stable than those using conventional methods — they maintained a relatively consistent size, shape and intensity, which is integral in achieving highly precise measurements. Using a focused telescope without a diffuser produced images that fluctuate in size and intensity. A common method of “defocusing” the telescope — deliberately taking the image out of focus to spread out light — yielded higher photometric precision than focused observations, but still created images that fluctuated in size and intensity.

“Diffused observations are by far the most stable,” said Ming Zhao, data scientist at The New York Times and former research associate at Penn State who led the diffuser effort at the 5m Hale telescope at Palomar.

The stability of the stellar image on a telescope detector is integral in achieving high precision photometric measurements. This video compares diffuser-assisted observations (right) to the two other most commonly used observing modes to observe transiting exoplanets: (left) observations using a defocused telescope, creating broad, but often highly unstable stellar images, and (middle) in-focus observations, which often fluctuate and “dance” around on the detector, degrading their precision. The diffused observations consistently deliver a broad and stable image of the star throughout the observations. The video images were obtained with the wide-field Infrared camera (WIRC) on the 5m Hale Telescope at Palomar Observatory, with and without a diffuser.

By shaping the output of light, the diffuser allows astronomers to overcome noise created by the Earth’s atmosphere. “The stable and smooth images delivered by diffusers are essential in minimizing the adverse effects of the turbulent atmosphere on our measurements, and in maximizing our precision,” said Zhao.

"This technology works over a wide range of wavelengths, from the optical — visible by humans — to the near infrared," said Jason Wright, associate professor of astronomy and astrophysics at Penn State and an author of the paper. “As such, diffusers can be used for a wide range of exoplanet science. We can use them to precisely measure the times exoplanetary worlds transit their stars, which will help us measure their masses and compositions, and even find new planets in their systems; and we can use them to study the temperature structures of giant planets' atmospheres."

The research team is already establishing collaborations to implement this technology on other telescopes around the world. “Our goal is to equip the broader exoplanet community with low-cost precision tools to deliver precise measurements to aid future observations in exoplanet science,” said Stefansson.

This research was funded by a Scialog grant from the Research Corporation for Science Advancement (Rescorp) and supported by the Center for Exoplanets and Habitable Worlds, a Leifur Eiriksson Foundation Scholarship, the NASA Earth and Space Science Fellowship Program, the National Science Foundation, and the Penn State Astrobiology Research Center.