The chronology describes this case as:

Attempted to intercept UFO in apparent orbit at 50,000 feet.2

It is interesting to note that, according to The Best Evidence, this is not the first time March AFB had

such an incident. The chronology lists another event exactly two months prior to this:

The source is, once again, USAF intelligence reports and the book, Flying saucers from outer space (1953) by Donald Keyhoe. The Blue Book files make no mention of such a case on July 23rd. The applicable section of Keyhoe’s book is in chapter 3, which reads: 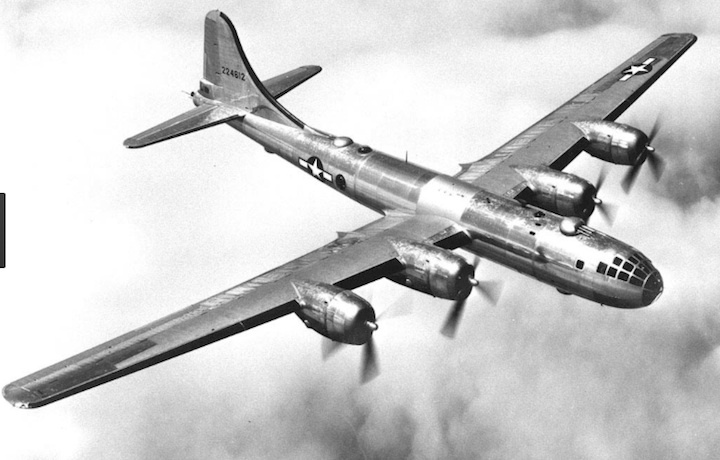 Then, slowly, sightings began to increase. One new and important report came from the guided-missile tracking base near White Sands, New Mexico. On the morning of July 14, two radar operators caught a fast-moving object on their scope. At the same time a tracker watching a B-29 with binoculars saw a large UFO near the bomber. Another observer quickly lined it up with his 35-mm. camera, then shot 200 feet of film. Because of the high altitude, the saucer showed only as a round, bright spot. But at least it was proof—this was no hallucination.

On September 11, an Air Force jet pilot spotted a gleaming disc flying over New Jersey at 900 miles an hour. Three days later, at Los Alamos, a saucer was seen maneuvering not far from the Atomic Energy laboratory. (Shortly before this, UFO-report forms had been distributed at Los Alamos, after saucers were sighted over several atomic installations.)

Later that month, on the 23d, two F-86 jet pilots were scrambled from March Field, California. Vectored by GCI, they spotted a round, silvery object flying a controlled orbit at 50,000 feet. The strange machine passed over the jets, kept on circling above them. Four more jets were scrambled, but none of the pilots was able to reach the UFO’s altitude.6

It seems the editors of the UFO evidence were more interested in compiling a whole bunch of cases instead of reading the source information closely. In the first paragraph, Keyhoe was talking about events in July. In the second paragraph, he had moved on to September. When he described the event on the 23rd of the month in the third paragraph, he was referring to September and not July. This means the July 23rd event is actually the event from September. For some reason, they still have yet to recognize this as their web site has an entry for this sighting with a brief entry by Brad Sparks.7

The July 23rd date is nothing more than a double entry and should be deleted from the best evidence.

Ruppelt gives this sequence of events8:

• 7:55 AM local time: Two F-86s on patrol over Long Beach see a UFO above them “high at twelve O’clock”. Ground control had no radar contact. F-86s start to climb. F-86s attempted to reach the UFO but it was too high. Described object as a “silver airplane with highly swept back wings”.

• Four more F-86s showed up and relieved the first two. They could not reach the UFO either. They estimated its altitude at 55,000 feet. The UFO appeared to speed up as the F-86s got close.

• One more F-86 was sent up to relieve the four, which were running out of fuel. By the time he arrived on station, the UFO had vanished. All of the pilots, with one exception, gave the description of a plane with swept back wings. The pilot, who gave a different description, stated the object was round and silver.

After several months, Ruppelt stated they tried to explain the event as a weather balloon but could not:

In a few days the data from the Long Beach Incident came in and I started to put it together. A weather balloon had been launched from the Long Beach Airport, and it was in the vicinity where the six F-86’s had made their unsuccessful attempt to intercept a UFO. I plotted out the path of the balloon, the reported path of the UFO, and the flight paths of the F-86’s. The paths of the balloon and the F-86’s were accurate. I knew, because the balloon was being tracked by radio fixes and the F-86’s been tracked by radar. At only one point did the paths of the balloon, UFO, and F-86’s coincide. When the first two F-86’s made their initial visual contact with the UFO they were looking

almost directly at the balloon. But from then on, even by altering the course of the F-86’s, I couldn’t prove a thing.

In addition, the weather observers from Long Beach said that during the period that the intercept was taking place they had gone outside and looked at their balloon; it was an exceptionally clear day and they could see at unusually high altitude. They didn’t see any F-86’s around it. And one stronger point, the balloon had burst about ten minutes before the F-86’s lost sight of the UFO.9

The Blue Book file mirrors much of what Ruppelt wrote10:

• Blue Book notes that there was no radar contact contrary to what NICAP reported.

• The description was of a swept wing aircraft with the wings swept at 45 degrees.

• At 0800, the four F-86s arrived in the area and split into two elements of two aircraft each.

• At 0925, the second element returned to base. They described the object as silver and round.

• The weather balloon, that was supposedly the target, was released at 0700 and was lost from view by the observers at 0743.

• The track of the weather balloon and aircraft was plotted by Blue Book.

• The speed of the object was described as “not too fast” by one of the pilots.

• No test aircraft were airborne at the time.

• The weather balloon released from Long Beach was lost at 42,900 feet due to “mechanical difficulties” and was last recorded ascending at 1000 feet/min.

• Captain Guthrie, who was in the flight of four F-86s, stated in his interview that he thought it was a weather balloon.

• Captain Harvey, who was in the flight of four F-86s, stated in his interview that it could have been a weather balloon.

• Captain Reichman, who was in the first fight, thought it was an aircraft conducting a burn.

• There was no indication that the weather office had reported the balloon bursting in their report. Instead, they simply state they lost track of the balloon at 0743.

object was not the weather balloon launched from Long Beach.

The biggest source of research balloons in 1951 was Holloman AFB. They have pretty extensive records of balloon launches and there is a potential candidate. On September 21, 1951 a balloon was launched but, after reaching 96,000 feet and 16 hours of flight, they lost track of the balloon.11  The table states there was a separation failure (the payload never was released) but the balloon performed satisfactorily. The balloon, and its payload, were never recovered.

In 1962, A. D. Belmont, of General Mills, produced a report for the Office of Naval Research, with the title, “The stratospheric monsoon”.

It described how the stratospheric winds changed month by month over the year. The following charts show the prevailing winds for heights of 50mb (approx. 63,000 feet), 30mb (approx. 71,000 feet), and 10 mb (approx 85,000 feet) during the month of September. These winds came from the east, which means a balloon in the stratosphere would have traveled westtward.12

Specific stratospheric wind data for September of 1951 is hard to come by since balloons usually do not reach these altitudes before they burst. As noted above, it is a fact that the stratospheric winds during the summer months blow towards the west and, as fall arrives, they shift towards the east. Examining the performance of recent research balloons launched during the month of September, from New Mexico over the past six years, confirms this.13 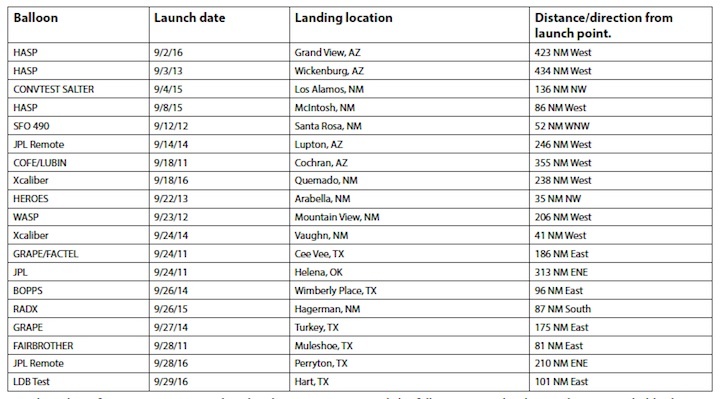 Based on this information, it appears that the change occurs around the fall equinox and indicates that it is probable that any stratospheric balloons launched before the 23rd would have drifted towards the west. Long Beach is about 700 miles distant from Holloman and at an azimuth of about 278 degrees. Assuming the balloon was launched in the morning, the balloon would have traveled at roughly 15-20 mph (13-17 knots) if it took a direct route. This is well within expected wind speeds for the stratosphere.

The tracks of the aircraft attempting intercepts indicate the balloon was drifting towards the NorthWest. The track (in red) is only an approximate one based on the actions of the three different flights of aircraft. While the pilots described themselves cruising directly beneath the object in an orbit of some kind, it is possible it was their own motion that gave the impression that the object was in an orbit. They may have overshot the target and were circling back to reacquire it. 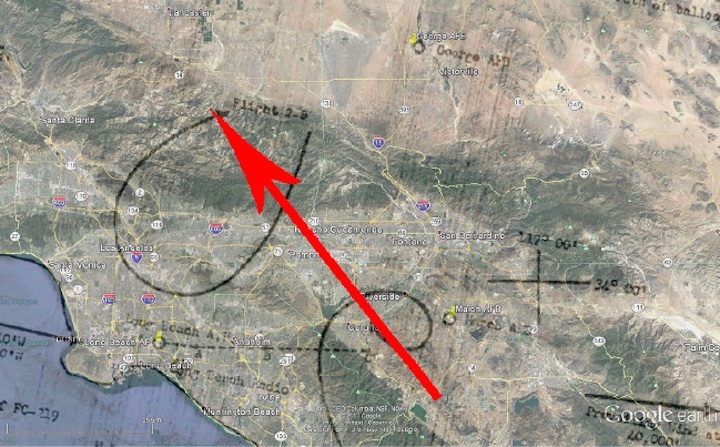 To drift to the Long Beach area from Holloman, the balloon would have been on almost a westerly course (azimuth 278-280). While, this track indicates a more northwesterly course, a change in the direction of the balloon from West to NorthWest is not that surprising.

I  want to think that the weight of the evidence suggests that the likely source was the Holloman research balloon launched on September 21st. However, the evidence is not as firm as I would like. We don’t have any good data about the balloon other than it was launched on the 21st, ascended into the stratosphere, and was never recovered. The rest is all about the probability of it reaching Long Beach in two days. With that being said, it is my opinion that the Holloman AFB research balloon is more likely than something “unknown to science” hovering over Long Beach that morning. The case cannot be considered “best evidence” and should be discarded.