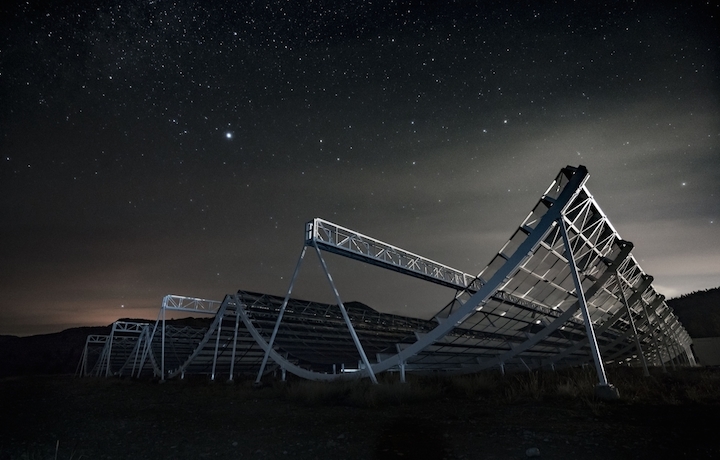 A Canadian effort to build one of the most innovative radio telescopes in the world will open the universe to a new dimension of scientific study. The Honourable Kirsty Duncan, Minister of Science, today installed the final piece of this new radio telescope, which will act as a time machine allowing scientists to create a three-dimensional map of the universe extending deep into space and time.

The Canadian Hydrogen Intensity Mapping Experiment, known as CHIME, is an extraordinarily powerful new telescope. The unique “half-pipe” telescope design and advanced computing power will help scientists better understand the three frontiers of modern astronomy: the history of the universe, the nature of distant stars and the detection of gravitational waves.

By measuring the composition of dark energy, scientists will better understand the shape, structure and fate of the universe. In addition, CHIME will be a key instrument to study gravitational waves, the ripples in space-time that were only recently discovered, confirming the final piece of Einstein’s theory of general relativity.

CHIME is a collaboration among 50 Canadian scientists from the University of British Columbia, the University of Toronto, McGill University, and the National Research Council of Canada (NRC). The $16-million investment for CHIME was provided by the Canada Foundation for Innovation and the governments of British Columbia, Ontario, and Quebec, with additional funding from the Natural Sciences and Engineering Research Council and the Canadian Institute for Advanced Research. The telescope is located in the mountains of British Columbia’s Okanagan Valley at the NRC’s Dominion Radio Astrophysical Observatory near Penticton.

“CHIME is an extraordinary example showcasing Canada’s leadership in space science and engineering. The new telescope will be a destination for astronomers from around the world who will work with their Canadian counterparts to answer some of the most profound questions about space. Our government believes in providing scientists with the opportunities and tools they need to pursue the answers to questions that keep them up at night.” – The Honourable Kirsty Duncan, Minister of Science

“With the CHIME telescope we will measure the expansion history of the universe and we expect to further our understanding of the mysterious dark energy that drives that expansion ever faster. This is a fundamental part of physics that we don’t understand and it’s a deep mystery. This is about better understanding how the universe began and what lies ahead.” – Dr. Mark Halpern, University of British Columbia

“CHIME’s unique design will enable us to tackle one of the most puzzling new areas of astrophysics today – Fast Radio Bursts. The origin of these bizarre extragalactic events is presently a mystery, with only two dozen reported since their discovery a decade ago. CHIME is likely to detect many of these objects every day, providing a massive treasure trove of data that will put Canada at the forefront of this research.” – Dr. Victoria Kaspi, McGill University

“CHIME ‘sees’ in a fundamentally different way from other telescopes. A massive supercomputer is used to process incoming radio light and digitally piece together an image of the radio sky. All that computing power also lets us do things that were previously impossible: we can look in many directions at once, run several experiments in parallel, and leverage the power of this new instrument in unprecedented ways.” – Dr. Keith Vanderlinde, University of Toronto

THE FOLLOWING IS A JOINT PRESS RELEASE FROM McGILL UNIVERSITY AND THE UNIVERSITY OF TORONTO.

CHIME, the revolutionary Canadian radio telescope inaugurated today in British Columbia, incorporates creative technology that will enable it to simultaneously tackle major astrophysics and cosmology topics — including studying the nature of “dark energy” by making unprecedented maps of the distant Universe, and determining the origin of the mysterious phenomenon known as Fast Radio Bursts.

Unlike traditional telescopes, CHIME (short for the Canadian Hydrogen Intensity Mapping Experiment) has no moving parts. The telescope, produced by 50 scientists from the University of British Columbia, the University of Toronto, McGill University, and the National Research Council of Canada “sees” the radio sky in a novel way: It uses over a thousand antennas to record the information from all the radio waves falling across its surface.

The radio signals are converted to digital data at a rate of 13 terabits per second – comparable to the entire world’s mobile data rate. This amount of information can’t be stored, so it is processed in real time. With these techniques, CHIME is able to digitally “point” anywhere within a wide stripe of sky overhead, making traditional telescope steering unnecessary.  More importantly, it is able to look in many different directions simultaneously.

The innovation that has led to CHIME was made possible by creative new technology developed at universities across Canada, allowing this telescope to be built with $16 million (Canadian) in federal and provincial funding — a fraction of the cost of other world-class radio telescopes.

At the heart of CHIME is a sophisticated digital network and signal-processing “brain,” known as the correlator, where the massive amount of information from radio waves is processed into an image of the overhead sky. The correlator developed by the team is unparalleled in the world in terms of raw networking and processing rate, and low cost. To achieve this, the team had to develop new, custom innovations integrated with market-driven commercial technologies.

“You can’t just go out and buy the world’s largest radio correlator”, explains McGill University’s Matt Dobbs, “it needs to be carefully developed by a team who knows the science objectives in detail and is able to engineer the technology.” In doing this, Dobbs explains, “we’re building both a novel instrument and a team of experts in Canada with the know-how to innovate world-class scientific instruments. Working with the amazing team of engineers, postdocs and students who together have realized this project has been inspiring.”

The custom-designed-and-built circuit boards convert radio signals detected by the antennas into digital data. They split these data into about a thousand different radio frequencies, much like a glass prism separates different colours of light. The data are then passed through a giant custom-built data network. 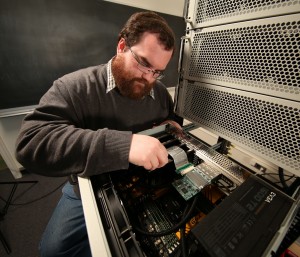 U of T graduate student Nolan Denman working on a CHIME correlator node. Together, 256 nodes combine to form the correlator which processes CHIME’s data.

A supercomputer built from computer-gaming gear

The second crucial component of the CHIME correlator was built by assembling a huge array of Graphics Processor Units (GPUs) — technology driven by the computer gaming industry — into a specialized supercomputer built for this application. By cleverly reprogramming the GPUs, researchers at the University of Toronto were able to use this supercomputer to construct cosmic sky maps while simultaneously enabling a sensitive search for Fast Radio Bursts.

“The University wondered why I was using grant money to buy so many gaming cards,” laughs University of Toronto researcher Keith Vanderlinde. “By building this supercomputer with commercially available GPUs, and developing a software that images the sky, we were able to build a world-leading, yet affordable, telescope. This lays the foundations for building even more powerful telescopes in the future.”

CHIME’s foundation is an array of four large cylinders resembling snow-board half-pipes, with total area equivalent to five hockey rinks. Each cylinder focuses radio waves onto a line of 256 radio antennas per cylinder that turn celestial signals into electrical signals. “CHIME’s radio signals are sent through custom-designed analog circuitry that is based on commercially available and inexpensive filters and amplifiers developed for the cell-phone industry, says University of British Columbia researcher Gary Hinshaw. “With CHIME, we have made market forces work for game-changing scientific progress.” 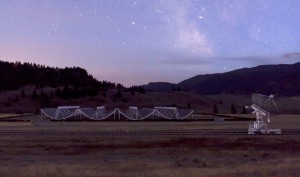 A sensitive instrument to detect Fast Radio Bursts is also being developed for CHIME.  Consisting of 128 compute nodes, this instrument can search continually for fast radio transients in the entire area of sky viewable by CHIME.  Sophisticated algorithms and software pipelines have been developed to sift through 130 billion bits of data per second in real time. “By making smarter computer algorithms we have prepared CHIME to be the world’s most efficient Fast Radio Burst search engine,” says researcher Kendrick Smith of the Perimeter Institute, one of several other institutions contributing to the project.

CHIME, now in its commissioning phase in preparation for science operations, was built at the Dominion Radio Astrophysical Observatory (DRAO) near Penticton, B.C., with funding from the Canada Foundation for Innovation, the governments of British Columbia, Quebec and Ontario, and the Canadian Institute for Advanced Research.

More information on CHIME can be found at www.chime-experiment.ca