This Ultrathin Craft Could Soon Envelop and Destroy Space Junk

At least 500,000 pieces of space debris threaten satellites and astronauts, but a California-based company says it has a new approach for taking out the garbage. 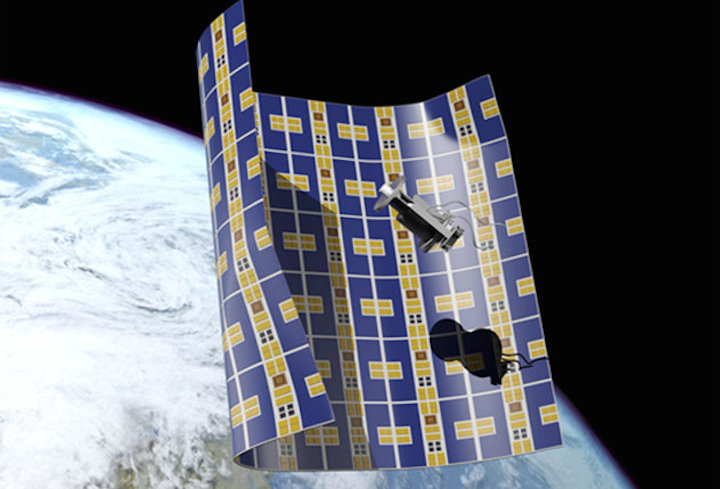 Think of the latest idea of collecting space junk as something akin to a hungry tiger pouncing on its prey. Aerospace Corporation says its Brane Craft will wrap itself around debris orbiting Earth and drag it back down through the atmosphere, causing it to burn up and never again threaten satellites or astronauts.

The project recently received a second round of funding from the NASA Innovative Advanced Concepts program, which funds far-out ideas that remain years away from launch — if they get there at all.

The Brane Craft is a yard across, flexible, and less than half the thickness of a human hair. This makes it difficult to protect the spacecraft's electronics from radiation, or even micrometeorites.

"It has to be bullet-proof, because a 5-micron diameter particle can penetrate the main structural sheet, which is only 10 microns thick," Siegfried Janson, principal investigator and a senior scientist at Aerospace Corporation, said.

So the company, based in El Segundo, Calfironia, has designed the spacecraft to be resilient. If one solar cell is whacked by a micrometeorite, only that cell will fail. Same goes for the craft’s microprocessor and digital electronics — if one fails, others will keep working. Even the propellant tank, which is sandwiched between two thin sheets, is split into multiple segments. In the case of a micrometeorite strike or an electrical short, other segments are designed to remain operable.

Radiation is another challenge as the spacecraft is thin and most commercial electronics cannot withstand the harsh conditions of space. The NIAC grant allows the company to investigate how to improve radiation tolerance during the short deployments that the company has proposed for the craft.

Aerospace Corporation aims to make the craft efficient and low cost. The thin spacecraft is not only lightweight, which reduces fuel consumption, but is easy to stack in a launcher and deploy in a swarm of dozens of bots, each on a track to a different rogue piece of debris. Brane Crafts will be powered by ultrathin solar cells as well as a little bit of propellant. The company plans to launch the craft frequently, with many Branes deployed at the same time, helping to reduce costs.

After each Brane envelops a piece of space junk, it will navigate back to towards Earth, acting like a near-space incinerator as it and the junk burn up in the atmosphere.

We've known about orbital debris for decades, but with each launch the problem becomes more urgent. There are at least 500,000 pieces of debris circling Earth. And that doesn't include tiny, yet dangerous, pieces of junk like paint flecks, which can cause a lot of damage when smacking into a spacecraft at upwards of 17,500 miles per hour.

NASA revises occasionally the orbit of the International Space Station to avoid space debris. Spacecraft often collide with the detritus of previous space missions, causing dings and damage. In 2009, the operational Iridium 33 and dead Kosmos-2251 satellites were destroyed after smacking into one another, which caused a swarm of space debris that is still swirling around Earth.

Beyond helping to take out the garbage, Brane Craft technology could help to lessen the weight of other communication satellites.

The NIAC grant provides two years of funding for laboratory demonstrations of the thin film. The investigators plan to outline how to develop the technology and which fabrication technologies hold the most promise.

"We're also looking at how we can get government or other companies interested in this to take this to the next level," Janson said, pointing out that readiness for space would likely take a few million dollars.

But once Brane gets going, if enough spacecraft are deployed, the concept should be able to pull down most objects of 0.9 kilograms (2 pounds) or less within a few years, he said.