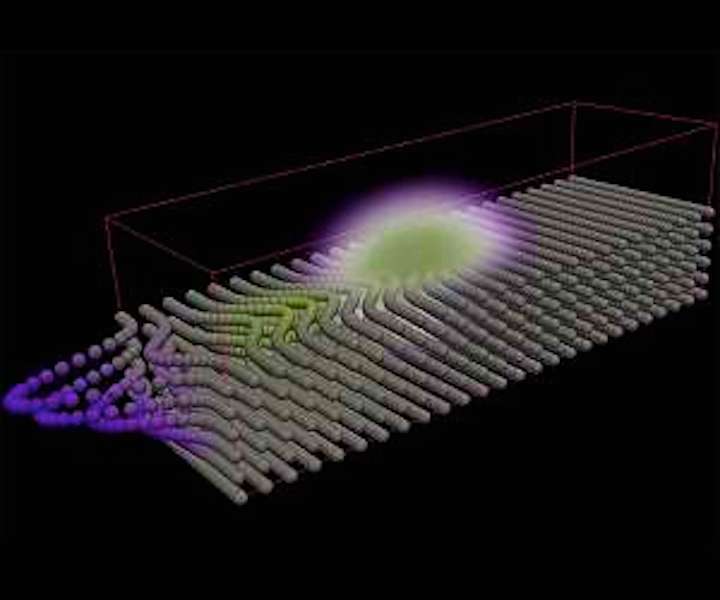 The optical force on atoms forms a mass density wave that propagates with light through the crystal. Credit Jyrki Hokkanen / CSC - IT Center for Science

In a recent publication, Aalto University researchers show that in a transparent medium each photon is accompanied by an atomic mass density wave. The optical force of the photon sets the medium atoms in motion and makes them carry 92% of the total momentum of light, in the case of silicon.

To solve the momentum paradox the authors prove that the special theory of relativity requires an extra atomic density to travel with the photon. In related classical computer simulations, they use optical force field and Newton's second law to show that a wave of increased atomic mass density is propagating through the medium with the light pulse.

"Since our work is theoretical and computational it must be still verified experimentally, before it can become a standard model of light in a transparent medium. Measuring the total momentum of a light pulse is not enough but one also has to measure the transferred atomic mass. This should be feasible using present interferometric and microscopic techniques and common photonic materials", researcher Mikko Partanen says.

Potential interstellar applications of the discovery
The researchers are working on potential optomechanical applications enabled by the optical shock wave of atoms predicted by the new theory. However, the theory applies not only to transparent liquids and solids but also to dilute interstellar gas.

Using a simple kinematic consideration it can be shown that the energy loss caused by the mass transfer effect becomes for dilute interstellar gas proportional to the photon energy and distance travelled by light.

"This prompts for further simulations with realistic parameters for interstellar gas density, plasma properties and temperature. Presently the Hubble's law is explained by Doppler shift being larger from distant stars.

"This effectively supports the hypothesis of expanding universe. In the mass polariton theory of light this hypothesis is not needed since redshift becomes automatically proportional to the distance from the star to the observer", explains Professor Jukka Tulkki.