Sotheby's is holding its inaugural Space Exploration auction on July 20, exactly 48 years, to the day, after the Apollo 11 lunar landing 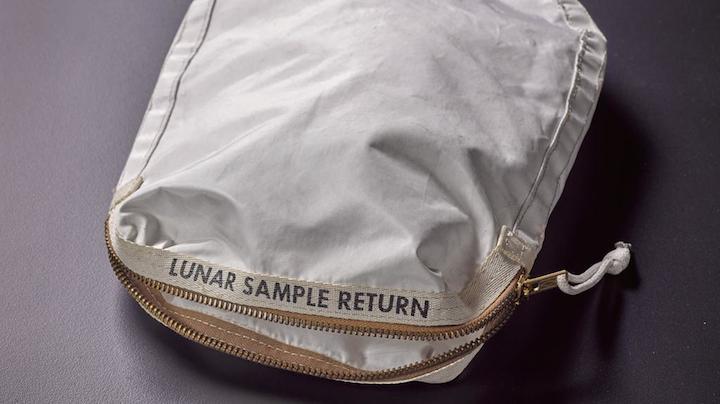 “Houston, Tranquility Base here. The Eagle has landed.”

On July 20, 1969, these eight words crackled across the airwaves, holding the world entranced and altering forever the boundaries of what was considered possible.

The man speaking was Neil Armstrong, whose brevity marked the moment when the lunar module Eagle completed its perilous journey from Apollo 11 and touched down upon the surface of the Moon. The world waited on tenterhooks as hour after hour of checks were carried out. Finally, the hatch opened, and Armstrong descended the ladder to become the first human to set foot on the Moon, with the now immortal words: “That’s one small step for man, one giant leap for mankind.”

There cannot be many who have not, however briefly, glanced at the Moon and wondered what it must have been like for Armstrong to look back at the blue and green planet we call home. The landing may have happened almost five decades ago, but space exploration has not lost its allure. Even those of us who were not born when this momentous event unfolded are caught in its gravitational pull.

With this in mind, it seems only fitting that Sotheby’s New York has decided to host its first space exploration auction, featuring memorabilia from American-led space missions, exactly 48 years to the day after Apollo 11’s lunar landing.

“The space programmes are a huge source of inspiration for future generations around the globe,” says Cassandra Hatton, space expert and senior specialist, books and manuscripts, at Sotheby’s New York.

“Many of us remember watching in awe as Armstrong first set foot on the Moon, and remember vividly the excitement and sometimes tragedy associated with each launch. This is a field that requires no special background or training to appreciate, and anyone, regardless of their age, can share in the excitement. Space exploration unites us as humans in a common goal of escaping the bonds of Earth to explore what is beyond.”

Although an American ultimately became the first person to land on the Moon, for many years Russia led space exploration. In 1957, it launched the world’s first satellite, Sputnik, and in 1961, Russian pilot and cosmonaut Yuri Gagarin was the first man to orbit the Earth, beating his US counterpart Alan Shepard by 23 days. US president John F Kennedy ramped up the rivalry between the two countries in 1962, when he declared America’s intention of putting a man on the Moon. Issued as a rally cry, his words – “We choose to go to the Moon in this decade.... not because [it is] easy, but because [it is] hard” – marked the start of the so-called space race.

It is difficult to grasp just how huge a task this was at that time. Computing was still in its infancy, and many materials now deemed crucial to any sojourn into the vacuum of space had yet to be invented. To put this into context, the computer that powered the Apollo missions filled almost an entire room, could only execute eight instructions simultaneously and had decidedly less memory than an Xbox 360 game console. That men trusted their lives to such basic technology seems beyond comprehension, and the crews, made up of experienced fighter plane test pilots, sat helpless inside their capsules, at the mercy of others to send them into – and, most crucially, bring them home from – the unknown. Although mixed with rhetoric fuelled by the Cold War between the US and Russia, Kennedy’s unwavering belief and commitment to lunar exploration is partly why the space centre in Florida still bears his name.

Innumerable items were created as part of this dash for the skies, but very few have so far been put up for sale. In 1993, Sotheby’s staged a Russian space history auction, offering 227 lots over three days, and generating sales in excess of US$6.8 million (Dh25m).

Attended by former Russian cosmonauts, with a mood best described as frenzied, the packed sales room jostled to snap up items such as Gagarin’s handwritten speech for $123,500 (Dh453,655); instructions for the finders of the returned Soviet space dogs Belka and Strelka for $10,350 (Dh38,000); and even a Lunokhod 1 lunar rover, which sold for $68,500 (Dh252,000), despite having being left on the Moon since 1971, with no prospect of it ever making a return to Earth.

Crucially, the sale also offered Moon rock, which Hatton is quick to highlight “to this day remains the only legal sale of Moon rocks to have
ever occurred”.

It is this legal provenance that holds the clue as to why most sales have so far offered Soviet, but not US items. Unlike the Soviet Union, which lost any claim to these space items when it collapsed, until recently, US law prohibited all sales of space items, as they were deemed to be owned by Nasa, and ultimately, the American government. This has now changed.

“New laws were enacted,” Hatton explains, “allowing US astronauts who participated in the Mercury, Gemini, or Apollo missions clear title to any artefacts that they received during their missions, and thus, clear title to anyone that they sell or gift such items to.

“This means that items that one would normally only find in museums are now available for private ownership.”

Thanks to this fundamental shift in policy, the market is expected to open up, kicking off with the Sotheby’s Space Exploration auction next week. Alongside original charts, maps and engineering models, one item on offer is a photograph taken of Buzz Aldrin by Armstrong, on the surface of the Moon. This is one of the most defining images of the era. Signed by and with a note from Aldrin, it carries a reserve price of between $3,000 and $5,000 (up to Dh18,400).

Also available is a flag carried aboard Apollo 11 signed by Armstrong, Aldrin and the third astronaut on board, Michael Collins. In the years after the mission, Armstrong became uncomfortable with his signature changing hands for large sums, and in later years became so disillusioned that he refused all requests for an autograph. This signed flag is, therefore, estimated to sell for between $40,000 and $60,000 (up to Dh220,500).

Perhaps unexpectedly, the star listing of the sale is an unassuming bag marked “Lunar sample return”, which comes with a reserve price of between $2m and $4m (up to Dh14.7m).

Shedding light on what makes this so interesting, Hatton explains: “The top lot in the sale is the very bag that Neil Armstrong used on the Apollo 11 mission to bring back the first samples of the Moon ever collected.”

Called an outer decontamination bag, it still has traces of lunar dust inside it.

“We thought that the anniversary date of this historic event was the perfect day on which to sell an artefact of such significance.”

One nation that will no doubt be watching the sale with interest is the UAE – one of the more recent arrivals to the field of space exploration. In 2014, the country set out an ambitious plan to be the first Arab nation to send an unmanned probe to Mars, joining the ranks of only nine other nations with its own space programme, dubbed the Emirates Mars Mission.

Fittingly named Hope, the UAE’s unmanned spacecraft for the Mars probe aims to gather data about the atmosphere, which it will then share with other research facilities.

Although Hope is on a serious scientific mission, there is a touch of poetry about it, too, timed as it is to arrive on the Red Planet in 2021, to coincide with the 50th anniversary year of a unified UAE.

Covering 60 million miles (equal to 156 non-stop journeys to the Moon) and reliant on solar power, Hope has a difficult voyage ahead of it.

Once in space, and with no air friction to slow it down, it will travel at 126,000kph for seven months to reach its destination.

Once there, transmissions back to Earth will take up to 20 minutes to arrive, meaning the craft must be capable of piloting itself. It must slow itself down enough to enter Mars orbit, where it will, at long last, be able to collect samples and data.

With a single orbit taking 55 hours and covering an ellipse of up to 44,000 kilometres, the entire mission is designed to take almost two years from launch to completion.

In the interim, enthusiasts can get their space fix from the upcoming Sotheby’s auction, and add to or build up a stockpile of cosmic collectibles.

The head of Sotheby’s Dubai, Katia Nounou, sums it up perfectly. “From those aspiring to be astronauts to those simply reaching for the stars, we’re thrilled to offer the chance to get one step closer to the Moon this summer,” she says.

“We hope space exploration inspires all of our visitors to look back on mankind’s immense achievements, and to reimagine the impossible as possible.”