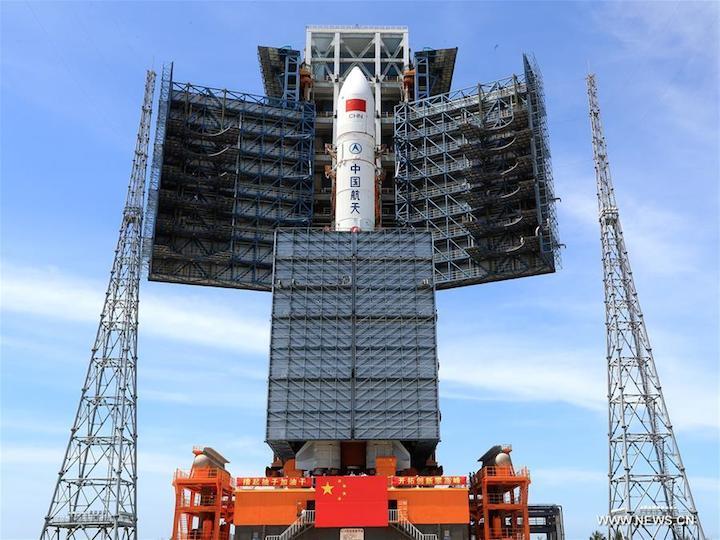 Photo taken on June 26, 2017 shows Long March-5 Y2 carrier rocket at Wenchang Space Launch Center in south China's Hainan Province. Carrying Shijian-18 communication satellite, the rocket was vertically transferred to the launch area at Wenchang Space Launch Center on Monday. China has set the window to launch the rocket between July 2 and 5, according to the State Administration of Science, Technology and Industry for National Defense. (Xinhua/Zhang Wenjun)

BEIJING, China has set the window to launch its Long March-5 Y2 carrier rocket between July 2 and 5, according to the State Administration of Science, Technology and Industry for National Defense.

Shijian-18 will test processes for the new Dongfanghong-5 satellites and carry out in-orbit experiments.

After arriving at the launch base on May 5, the rocket has undergone assembly and testing. This will be the second launch mission for the Long March-5, which debuted in Wenchang in November 2016.

During the mission, the rocket will further test its core technology, accumulate data and provide support ahead of the launch of the Chang'e-5 lunar probe in the second half of this year.

Fuelled by liquid hydrogen, kerosene and liquid oxygen, the Long March-5 can carry a payload of 25 tonnes into low Earth orbit and 14 tonnes in geostationary orbit, over 2.5 times the capacity of current Long March carrier rockets. 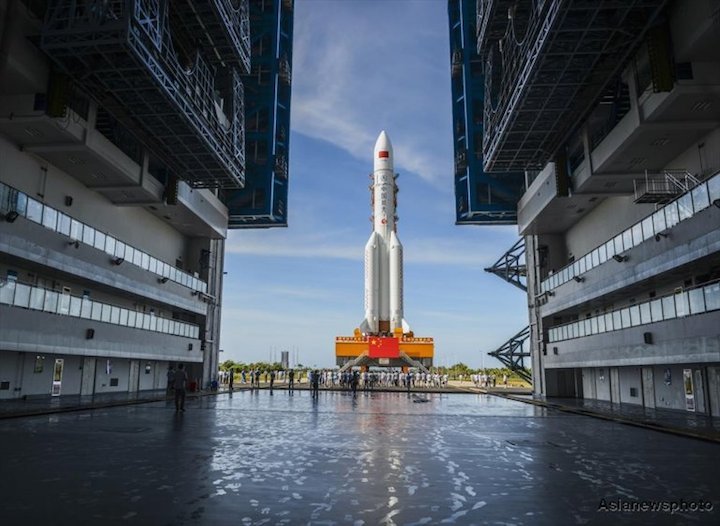 China has rolled out its largest and most powerful launch vehicle, the Long March 5, in preparation for the rocket's second launch from the Wenchang Satellite Launch Centre.

The launch window opens on July 2 and runs to July 5. The launch is, as with other launches from the new launch centre on Hainan Island, expected to be streamed live.

Shijian-18 is based on the China's new, untested Dongfanghong-5 (DFH-5) satellite platform. At around seven metric tonnes, it will be one of the most massive satellites sent to geostationary orbit, some 36,000 kilometres above the Earth.

The High-Throughput satellite will boast a capacity of around 70 Gbps, and test both space-based laser communications and powerful LIPS-300 ion thrusters, which will be used for station keeping.

The Long March 5 debuted in dramatic circumstances in November last year, and is set to launch China's most complex and ambitious mission so far, the Chang'e-5 lunar sample return mission, in November.

Data from the early July mission will be valuable to the Chang'e-5 mission, which is key part of expanding lunar plans.

Above: The maiden flight of Long March 5 in November 2016.

At over 53m high and with a core diameter of 5m, the Long March 5 will have a mass at liftoff of around 800 metric tonnes.

Though its development was delayed by technical challenges, the launch vehicle greatly boosted China's space capabilities.

It will also launch China's first independent interplanetary mission, to Mars, in 2020. A variant for low Earth orbit launches, the Long March 5B, will be used to launch 20 metric tonne modules for the future Chinese Space Station.

The core module, Tianhe, is ready for launch in 2019, following a test launch of the 5B next year, which could carry a test return capsule for a next-generation Chinese crewed spacecraft.

The Long March 5, developed by the China Academy of Launch Vehicle Technology (CALT) , is comparable to the most powerful active rockets in the world such as the Delta-IV Heavy, Atlas V and Ariane 5.

The new launch vehicle also meant new facilities. While China’s established Long March 2, 3, and 4 can transported by train to the three inland launch sites at Jiuquan and Taiyuan in the north and Xichang in the southwest, the five-metre diameter core of the Long March 5 makes it too wide for the transport infrastructure.

So a new coastal launch centre was required and established on the southern island province of Hainan. Being closer to the equator, the Wenchang launch site also gives rockets a boost from the greater rotational speed of the Earth.

Two specially designed ships, Yuanwang 21 and 22, deliver components for the Long March 5 and 7 from Tianjin to Hainan.

Above: Yuanwang 21 and 22 delivering Long March 5 to Qinglan Port, Hainan.

Above: Rocket team members pose as the Long March 5 rolls out (CASC).