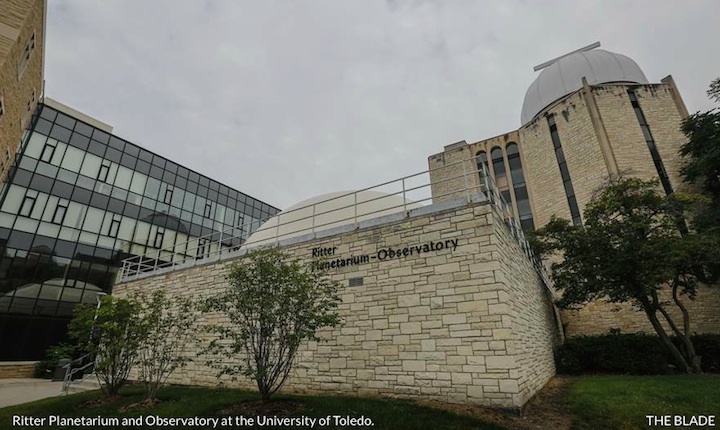 In 1946, Lyman Spitzer, Jr., a young astrophysicist from Toledo, proposed putting telescopes in space. Fifty-seven years later, I watched as the Spitzer Space Telescope took off from Cape Canaveral, Fla., and disappeared into the night sky.

I was part of the large team that built this great NASA observatory named in memory of the Toledo native. Designed to observe the universe in infrared light, Spitzer continues to make new discoveries, including the recent detection of a star with seven Earth-sized planets.

Today, University of Toledo researchers and students use Spitzer and NASA’s other space telescopes by downloading the data and engaging in the exploration of the universe from the Ritter Planetarium and Observatory. My students and I study the birth of stars and planets cloaked in dark clouds of gas and dust.

Infrared light, which we cannot see with our own eyes, penetrates these clouds and allows us a view of star birth in action. The Earth’s atmosphere, however, glows with infrared light. By launching telescopes into space, we can observe the infrared sky unhindered by the atmosphere’s glow.

Working with an international team, we observe stars less than one million years old and in the process of growing — considered infants in the lifespan of a star. Our goal is to understand how the clouds of gas collapse into stars and planets, as well as to better understand the birth of our own solar system 4.6 billion years ago.

To make sense of the universe, astronomers at UT use observations made with many different telescopes on Earth and in space. Each observation is a piece of a cosmic jigsaw puzzle.

My graduate students use the Discovery Channel Telescope in Arizona to take the temperatures of infant stars. That opportunity is made possible by UT’s 10-year partnership with Lowell Observatory. On our UT campus, a team of undergraduates observes stars orbited by disks of hot gas using Ritter Observatory in an effort to understand the origin of the disks. One student recently discovered a companion star orbiting one of those stars.

Sometimes, more than one telescope is used. A UT researcher worked with an international team to combine the light from four telescopes to create sharp pictures of the powerful wind from a star 100 times more massive than our sun.

An undergraduate on my team also compared data from two space telescopes made six years apart and discovered a burst of energy from a young star consuming a big gulp of gas.

In recognition of our robust efforts in research, UT was invited in 2016 to join the Association of Universities for Research in Astronomy, or AURA, as one of 47 institutions, including Ohio State University and Yale University, tasked in the oversight of many of our nation’s telescopes. The students and researchers at UT are privileged to have such high-tech telescopes at our disposal. But you don’t need to look at the stars to see how space exploration benefits our daily lives.

Consider the GPS in your smart phone. It is the product of 400 years of discovery, from Newton’s laws to Einstein’s relativity and quantum physics.

Space exploration also places our world into a vast cosmic context. Back at Ritter, I am preparing for the next big space telescope — the James Webb Space Telescope, which will be launched in 2018. I can’t predict what we will find with this new telescope, but I can predict, confidently, that the universe will continue to astonish us.

Tom Megeath is a professor of physics and astronomy at UT and a member of the executive committee for NASA’s Cosmic Origins Program Analysis Group. He invites everyone to come to Ritter Planetarium on UT’s Main Campus Friday nights to join in exploration.