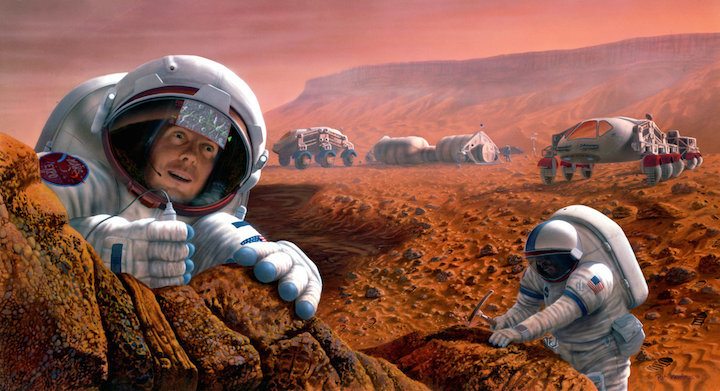 Sex in Space: The Final Frontier for Mars Colonization?

If humanity is serious about colonizing Mars, we need to get busy studying how to get busy in space.

We just don't know enough about how human reproduction and development work in the final frontier to confidently plan out permanent, sustainable settlements on the Red Planet or anywhere else away from Earth, said Kris Lehnhardt, an assistant professor in the department of emergency medicine at The George Washington University School of Medicine and Health Sciences.

"This is something that we, frankly, have never studied dramatically, because it's not been relevant to date," Lehnhardt said May 16 during a panel discussion at "On the Launchpad: Return to Deep Space," a webcast event in Washington, D.C., organized by The Atlantic magazine.

"But if we want to become a spacefaring species and we want to live in space permanently, this is a crucial issue that we have to address that just has not been fully studied yet," he added.

Off-Earth reproduction isn't a completely ignored topic, of course. Just last month, for example, a group of researchers in Japan announced that freeze-dried mouse sperm that was stored on the International Space Station for nine months gave rise to healthy pups.

Those results suggest that the relatively high levels of radiation experienced in space don't pose an insurmountable barrier to reproduction.

But the mouse sperm was brought back to Earth to produce embryos, which grew here on terra firma. How a human embryo would fare when away from Earth — in the microgravity environment of orbit or deep space, or on Mars, whose surface gravity is just 38 percent as strong as that of our planet — remains a mystery, Lehnhardt said.

"We have no idea how they're going to develop," he said. "Will they develop bones the way that we do? Will they ever be capable of coming to Earth and actually standing up?"

And there's a lot to think about beyond the nuts-and-bolts developmental issues. For example, people who are born and grow up on Mars, or in huge Earth-orbiting space habitats, "are going to be vastly different from what we are," Lehnhardt added. "And that may be kind of a turning point in human history."