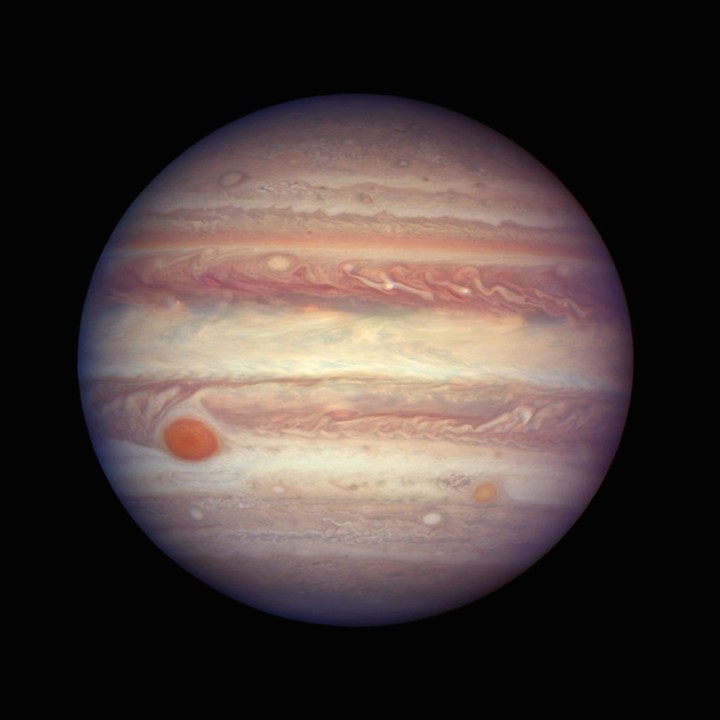 When the solar system was about 1 million years old, Jupiter's gravity was strong enough to prevent rocks from crossing beyond its orbit. Here the planet is seen through a Hubble telescope image. (A. Simon via GSFC/NASA/ESA)

Jupiter formed in a geologic blink. Its rocky core coalesced less than a million years after the beginning of our solar system, scientists reported Monday in the Proceedings of the National Academy of Sciences. Within another 2 million or 3 million years, that core grew to 50 times the mass of Earth.

Scientists have previously built computer models of the birth of Jupiter. But this study “is the first time that we can say something about Jupiter based on measurements done in the lab,” said study co-author Thomas S. Kruijer, a researcher at the Lawrence Livermore National Laboratory in California.

Our solar system began as a disk of dust and gas 4.6 billion years ago. Of the planets, first came the gas giants, followed by the rock-and-metal terrestrial worlds like Earth. Jupiter is the biggest of the brood. Despite being mostly gas by bulk, it's more than 300 times the mass of Earth. For that reason astronomers suspect the planet was the oldest, able to scoop up more material out of the disk before its younger siblings appeared.

The new study supports the idea of a firstborn Jupiter. When Jupiter formed, the growing planet swept up a great swath of gas and dust as it circled the sun.

What's more, it acted as a barrier to shield the inner solar system from wayward meteorites. When the solar system was about 1 million years old, Jupiter's gravity was strong enough to prevent rocks from crossing beyond its orbit, like a club bouncer who forces latecomers to wait on the sidewalk.

“At about 1 million years you have Jupiter getting big enough to cut off the inner solar system from the outer solar system,” said Brown University's Brandon Johnson, a planetary scientist who was not involved with the new research.

Then, when the solar system was around 4 million years old, Jupiter grew to about 50 Earth masses and headed toward the sun. This lowered the bouncer's velvet rope, allowing the outer asteroids to mix with the inner rocks. Today, they're jumbled together in a single belt, which exists between Jupiter and Mars. Rocks from this mixture land on Earth, where scientists like Kruijer can study them.

The new study adds evidence to the idea that Jupiter temporarily split the population of meteorites in the solar system in two: those between Jupiter and the sun, and those beyond Jupiter. If a pair of inner and outer space rocks landed in your front yard, and you picked them up after they cooled down and the dust settled, you wouldn't be able to spot a difference.

But Kruijer and his colleagues can measure specific chemical signatures in meteorites — which reveal not only the rocks' age but which of the two groups they once belonged to. It was only recently that technological advances allowed scientists to measure the differences in the two, Kruijer said.

The meteorite groups separated around 1 million years after the solar system formed, and stayed apart until about 4 million years post-formation, according to the new analysis. Crucially, the two populations existed simultaneously for a few million years.

“It cannot be a temporal change. It must be a spatial separation,” Kruijer said. Something must have kept them apart. The most likely culprit, the authors of the study say, is a young Jupiter. “It's hard to think of any other possibility,” he said.

“This is interesting work and presents an interesting result, which conforms well with our existing understanding,” said Konstantin Batygin, a planetary astrophysicist at the California Institute of Technology who was not involved with the research. “It may very well be what had happened.”

Planetary scientists are like detectives, Batygin said, scouring a scene for hints about what transpired. “In a crime scene it's the little splatters of blood on the ceiling,” he said, “that will tell you more than the dismembered limbs.” (In this analogy the planets are the chopped limbs and the meteorites the bloody spray.) But, as with hunting for murder clues, he added, “there's always room for doubt with these types of problems.”

It might be that the structure of the early disk kept the meteorite groups isolated, said Kevin Walsh, an astronomer at Southwest Research Institute in Colorado who was not involved with this work. “The key point the authors make is that Jupiter must form to keep these asteroid reservoirs separate while they form,” he said in an email. “It is possible that we have a naive understanding of the way asteroid building blocks could move in an early Solar System, and that a Jupiter mass planet isn't necessary.”

But such an early Jupiter jibes with other ideas about the early solar system. One concept, called the grand tack hypothesis, casts Jupiter as a wanderer. In the grand tack hypothesis, first proposed by Walsh and other scientists in 2011, Jupiter began to barrel toward the center of the solar system. That was, until Saturn formed, pulling Jupiter backward. (This pendulous wrecking-ball motion could be responsible for, among other things, the mixing of the meteorite groups into one belt.)

And it's likely that this young and massive Jupiter is responsible for a small Earth with a thin atmosphere. “We occupy a somewhat strange world, galactically speaking,” Batygin said. Earth, which formed about 100 million years after the solar nebula, lacked the gravity for a thick “nasty hydrogen helium atmosphere” found on other worlds. Thank Jupiter for sucking up most of that material.

Exoplanet hunters looking at other star systems have found several super-Earths, planets larger than Earth but smaller than gas giants like Neptune. Few exoplanets are as small as two Earths and exist in the habitable zone of their star. Kruijer speculated that the young Jupiter is the reason our solar system does not have any super-Earths close to our star.

In this light Jupiter is a pillar of the solar system. “Even in its infancy, Jupiter really controlled the dynamics and evolution of the solar system,” Johnson said. “It's the biggest thing there is. Even at a million years it's changing the way that our solar system looked.”