WASHINGTON — Stratolaunch, the company backed by billionaire Paul Allen to develop air-launch systems, rolled out its giant carrier aircraft for the first time May 31 in advance of ground and flight tests.

The aircraft moved out of its hangar at the Mojave Air and Space Port in California for the first time since construction of the giant plane began there several years ago. Two tugs towed the aircraft, resting on its 28-wheel landing gear, just outside the hangar to begin a series of tests.

“This marks the completion of the initial aircraft construction phase and the beginning of the aircraft ground and flight testing phase,” Jean Floyd, chief executive of Stratolaunch Systems, said in a statement about the rollout.

The aircraft’s test program will begin with fueling tests, where each of the plane’s six fuel tanks is independently filled to test their fueling mechanisms and check for leaks. The tanks will then be drained and the plane moved back into the hangar for weight and balance testing, according to a company fact sheet.

Stratolaunch then plans ground and engine tests, including taxi tests at the airport, in the “coming weeks and months,” Floyd said, before the airplane’s first flight. “This is a first-of-its-kind aircraft, so we’re going to be diligent throughout testing and continue to prioritize the safety of our pilots, crew and staff,” he said. “Stratolaunch is on track to perform its first launch demonstration as early as 2019.”

The Stratolaunch aircraft is the largest in the world by wingspan, measuring more than 117 meters from tip to tip. The plane weighs 226,800 kilograms empty, and 50 percent more when fully fueled. It can accommodate payloads weighing nearly 250,000 kilograms, attached to the wing segment between the twin fuselages.

Allen, the co-founder of Microsoft, announced Stratolaunch in late 2011. The aircraft’s size was dictated by initial plans to launch medium-sized payloads using a version of SpaceX’s Falcon 9. The companies parted ways a year later, and Stratolaunch then signed a contract with Orbital Sciences Corp. (now Orbital ATK) to develop a new rocket also for medium-class payloads. That project, known as Thunderbolt, has also been set aside.

Stratolaunch is now focused on the growing demand for small satellites. In October 2016, the company announced a new partnership with Orbital ATK where the Stratolaunch aircraft will be used for launches of Pegasus XL rockets, potentially up to three on a single flight.

Floyd, in the statement, said Stratolaunch was also looking at other vehicles as it makes preparations for accommodating Pegasus rockets at its Mojave hangar. “We’re actively exploring a broad spectrum of launch vehicles that will enable us to provide more flexibility to customers,” he said, without identifying the vehicles under consideration.

The company, funded by Allen, has not disclosed how much money it has spent on the project to date. However, in a May 1 panel session here on ultra low-cost access to space, Floyd was asked if his company was ready to spend “hundreds of millions of dollars” on technologies to reduce launch costs. “Definitely yes, and we already have,” he responded.

Floyd, earlier in that panel, said that Allen’s investment in Stratolaunch was not motivated by any potential financial return. “His vision is to change the human condition,” Floyd said of Allen. “He’s not out to make a buck. He’s not out to get a return on investment.”

“I’m not saying he wants to lose money,” he added. “But Paul Allen has never talked to me about, ‘How much money am I going to make if I pull this off?’”

Paul Allen just rolled out the world’s largest airplane, and he is ready to take on the rocket makers. 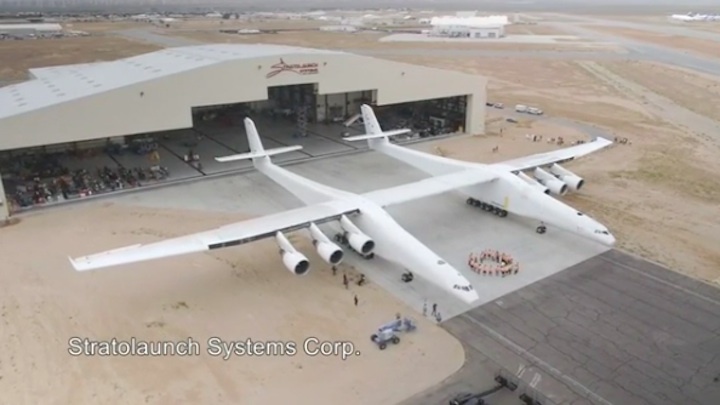 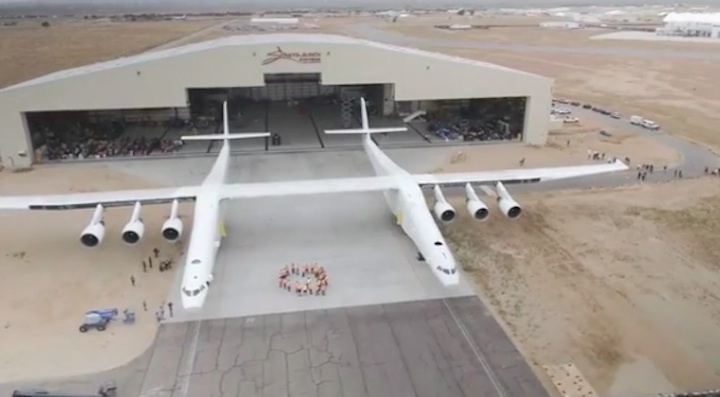 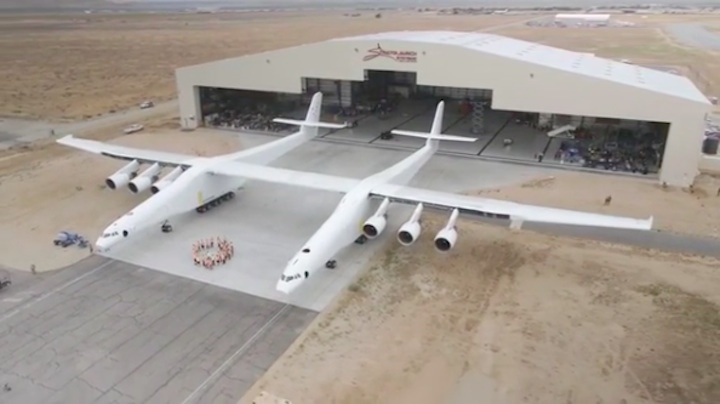 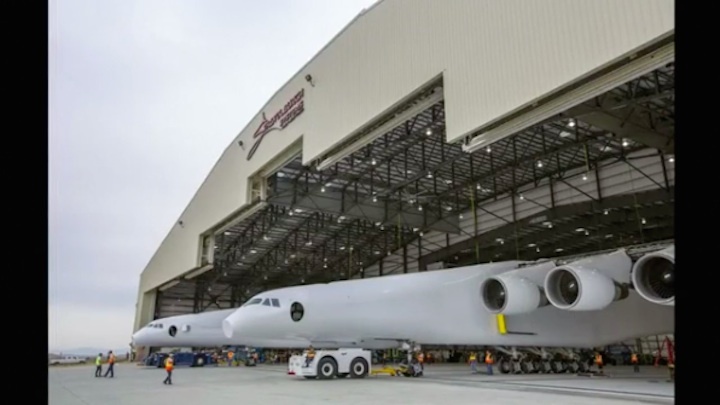 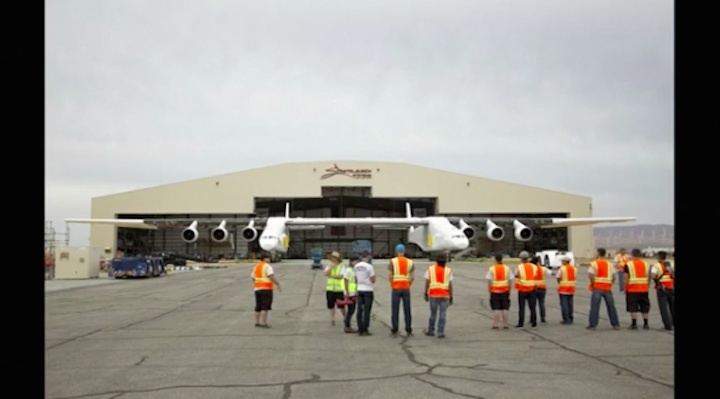 Space launch company Stratolaunch Systems rolls its twin-fuselage plane out of its hangar for the first time to conduct fueling tests. (Reuters)

The initial construction of the massive airplane Paul Allen has been quietly building in the California desert is complete, and the vehicle, which would be the world’s largest airplane with a wingspan wider than Howard Hughes’s Spruce Goose, was wheeled out of its hangar for the first time on Wednesday.

Called Stratolaunch, the plane has some impressive stats: a wingspan of 385 feet, or longer than a football field, a height of 50 feet. Unfueled, it weighs 500,000 pounds. But it can carry 250,000 pounds of fuel, and its total weight can reach as high as 1.3 million pounds.

It’s so big that to truly get a sense of it, you have to see it from a distance — like a mountain.

But why is Allen, the co-founder of Microsoft and owner of the Seattle Seahawks, building such a massive plane?

It’s not to carry passengers, but rather rockets. The bigger the plane, the larger the rockets, or the greater the number.

Allen’s Stratolaunch company has partnered with Orbital ATK to “air launch” the Dulles-based company's Pegasus XL, a rocket capable of delivering small satellites, weighing as much as 1,000 pounds, to orbit. The rockets would be tethered to the belly of the giant plane, which would fly them aloft, and once at an altitude of 35,000 feet or so, the rockets would drop and “air launch” to space.

“With airport-style operations and quick turnaround capabilities,” the company said it believes “air launch” is a cheaper and more efficient way to get satellites into space than rockets that launch vertically and can be extraordinarily expensive.

For Allen, it’s all about LEO, or low Earth orbit. He, and others, such as Richard Branson’s Virgin Orbit, are betting that they can reduce the cost of launching small satellites to space. And that, in turn, will lead to new ways to beam the Internet all across the globe, provide better Earth sensing capabilities, better communication, and open up all sorts of avenues.

“When such access to space is routine, innovation will accelerate in ways beyond what we can currently imagine,” Allen said in a statement a year ago. “That’s the thing about new platforms: When they become easily available, convenient and affordable, they attract and enable other visionaries and entrepreneurs to realize more new concepts.”

More than a decade ago, Allen had hoped to spark a revolution in space travel when he funded SpaceShipOne, which became the first commercial vehicle to cross the threshold of space. The project ultimately won the Ansari X Prize, and a $10 million award. He then licensed the technology to Branson and moved on to other pursuits. But with Stratolaunch, he is back in the space business.

“Thirty years ago, the PC revolution put computing power into the hands of millions and unlocked incalculable human potential,” he wrote. “Twenty years ago, the advent of the Web and the subsequent proliferation of smartphones combined to enable billions of people to surmount the traditional limitations of geography and commerce. Today, expanding access to LEO holds similar revolutionary potential.”

In a statement Wednesday, Jean Floyd, Stratolauch’s chief executive, said the company would be “actively exploring a broad spectrum of launch vehicles that will enable us to provide more flexibility to customers.”

He added: “Over the coming weeks and months, we’ll be actively conducting ground and flight line testing at the Mojave Air and Space Port. This is a first-of-its-kind aircraft, so we’re going to be diligent throughout testing and continue to prioritize the safety of our pilots, crew and staff. Stratolaunch is on track to perform its first launch demonstration as early as 2019.” 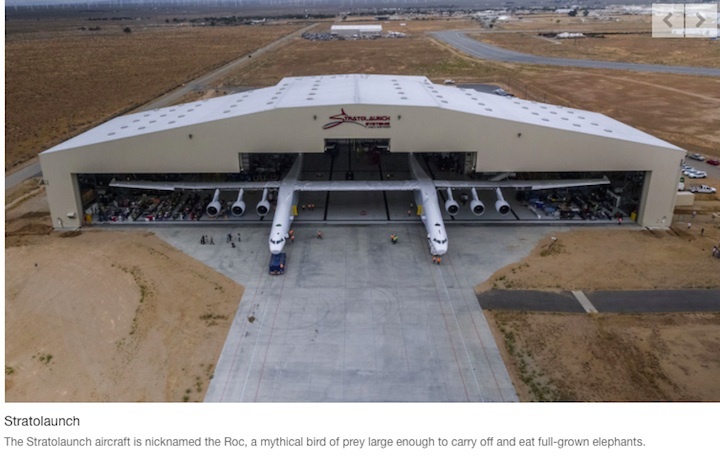 Huge. Gargantuan. Monstrous. And it appeared in Mojave on Wednesday.

No, it's not Godzilla, it's Stratolaunch, the world’s largest plane by wingspan, measuring 385 feet — by comparison, a National Football League field spans 360 feet.

Microsoft co-founder Paul Allen’s project — designed as a mothership to provide rockets and satellites routine access to low Earth orbit, saw the light of day for the first time Wednesday when it was wheeled out of its massive hangar at Mojave Air & Space Port in eastern Kern County.

"This marks the completion of the initial aircraft construction phase and the beginning of the aircraft ground and flight testing phase," Stratolaunch Systems chief executive Jean Floyd said in a statement.

Built by Scaled Composites, the specialty airplane development firm founded by aviation pioneer Burt Rutan, who designed SpaceShipOne, the aircraft is 238 feet from nose to tail and stands 50 feet tall from the ground to the top of the vertical tail.

"Over the past few weeks, we have removed the fabrication infrastructure, including the three-story scaffolding surrounding the aircraft, and rested the aircraft’s full weight on its 28 wheels for the first time," Floyd said. "This was a crucial step in preparing the aircraft for ground testing, engine runs, taxi tests and ultimately first flight."

Weighing in at a half-million pounds, the Stratolaunch aircraft is designed for a maximum takeoff weight of 1.3 million pounds, meaning it’s capable of carrying payloads up to approximately 550,000 pounds.

Stratolaunch is intended to carry a rocket between the two fuselages, and release it at 35,000 to 40,000 feet. The rocket will drop, light its engines and launch into space to deliver satellites and other payloads into orbit.

"As we announced last fall," Floyd said, "we will initially launch a single Orbital ATK Pegasus XL vehicle with the capability to launch up to three Pegasus vehicles in a single sortie mission.

"We have already started preparations for launch vehicle delivery to our Mojave facilities. We’re actively exploring a broad spectrum of launch vehicles that will enable us to provide more flexibility to customers."

Over the coming weeks and months, the company will be actively conducting ground and flightline testing at the space port.

"This is a first-of-its-kind aircraft, Floyd said, "so we’re going to be diligent throughout testing and continue to prioritize the safety of our pilots, crew and staff. Stratolaunch is on track to perform its first launch demonstration as early as 2019."

"It is a proud day for us at Stratolaunch, for our partners at Scaled Composites, and for our founder Paul Allen," Floyd said. "We have a lot of exciting activity ahead as we enter the testing process, and we look forward to sharing our progress during the coming months." 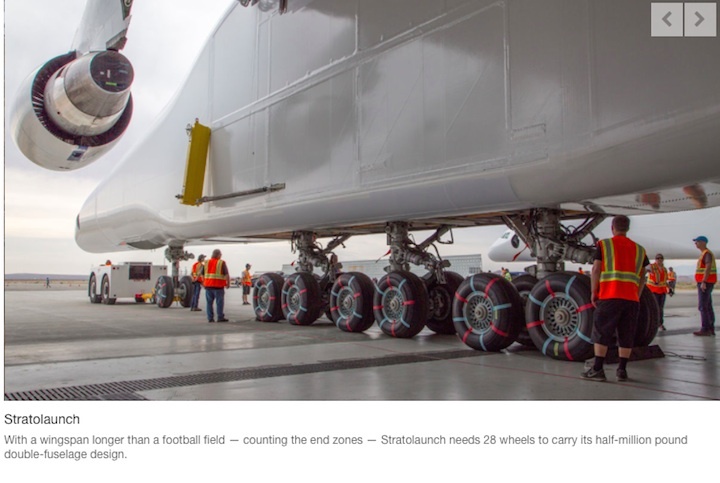 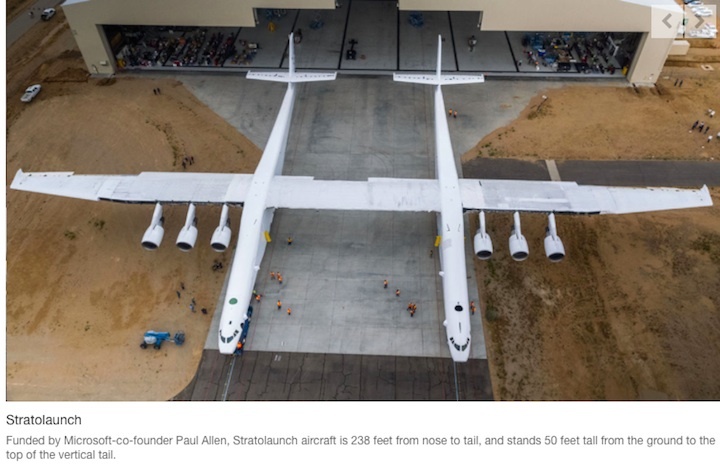 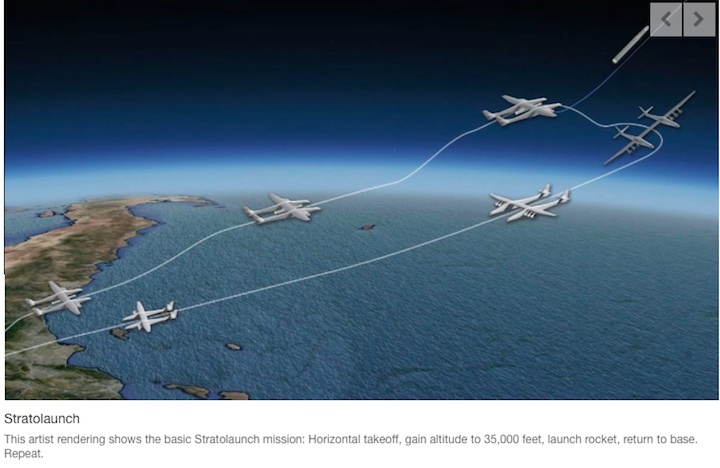 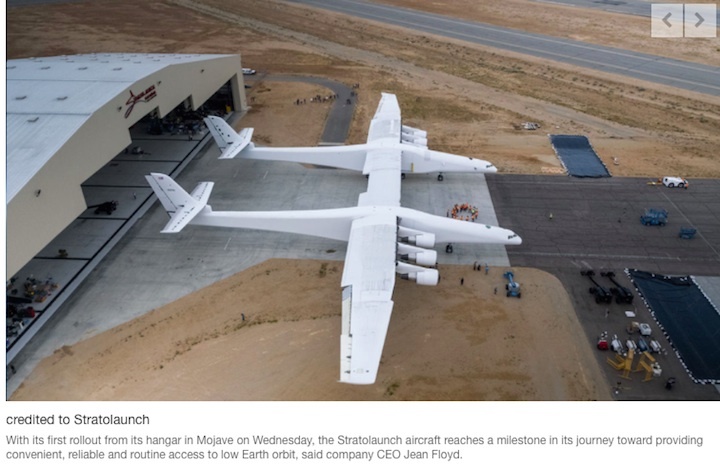