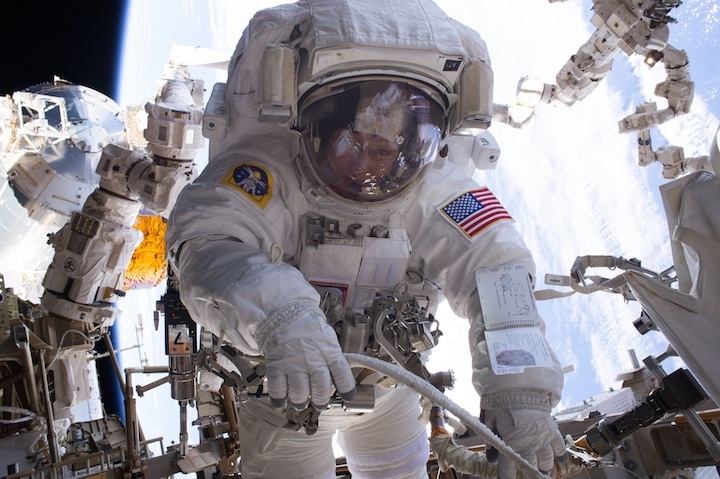 NASA astronaut Peggy Whitson is seen during a Jan. 6, 2017, spacewalk during Expedition 50 aboard the International Space Station.
Credits: NASA

NASA astronauts Peggy Whitson and Flight Engineer Jack Fischer will perform a landmark 200th spacewalk at the International Space Station Friday, May 12. Live coverage will begin at 6:30 a.m. EDT on NASA Television and the agency’s website.

Whitson, Expedition 51 commander, and Fischer will venture outside the Quest airlock to replace a large avionics box that supplies electricity and data connections to the science experiments, and replacement hardware stored outside the station.

The ExPRESS Carrier Avionics, or ExPCA is located on the starboard 3 truss of the station on one of the depots housing critical spare parts. It will be replaced with a unit delivered to the station last month aboard the Orbital ATK Cygnus cargo spacecraft.

In addition, Whitson and Fischer will install a connector that will route data to the Alpha Magnetic Spectrometer and help the crew determine the most efficient way to conduct future maintenance on cosmic ray detector.

During the planned 6.5-hour spacewalk, the astronauts also will install a protective shield on the Pressurized Mating Adapter-3, which was moved from the Tranquility to the Harmony module in March. This adapter will host a new international docking port for the arrival of commercial crew spacecraft. Whitson and Fischer also will rig a new high-definition camera and pair of wireless antennas to the exterior of the outpost.

The first spacewalk in support of International Space Station assembly and maintenance was conducted on Dec. 7, 1998, by NASA astronauts Jerry Ross and Jim Newman during space shuttle Endeavour’s STS-88 mission. Astronauts completed attaching and outfitting of the first two components of the station, the Russian Zarya module and the U.S. Unity module. 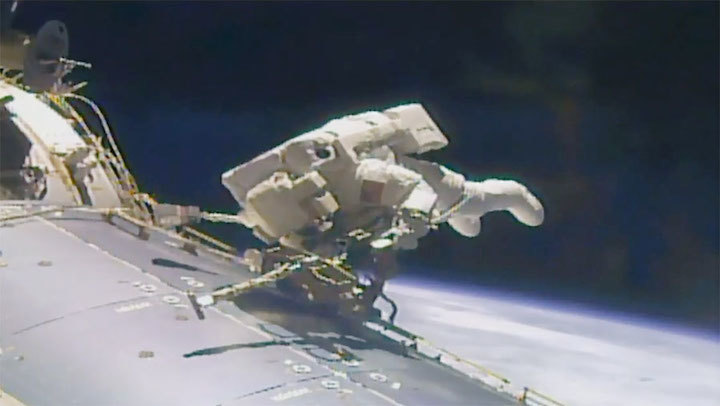 Astronaut Jack Fischer is tethered to the outside of the International Space Station during the 200th spacewalk to install and repair gear with astronaut Peggy Whitson.

Expedition 51 Commander Peggy Whitson and Flight Engineer Jack Fischer of NASA concluded their spacewalk at 1:21 p.m. EDT. During the spacewalk, which lasted just over four hours, the two astronauts successfully replaced a large avionics box that supplies electricity and data connections to the science experiments.

The astronauts also completed additional tasks to install a connector that will route data to the Alpha Magnetic Spectrometer, repair insulation at the connecting point of the Japanese robotic arm, and install a protective shield on the Pressurized Mating Adapter-3. This adapter will host a new international docking port for the arrival of commercial crew spacecraft.

Spacewalkers have now spent a total of 1,247 hours and 55 minutes working outside the station during 200 spacewalks in support of assembly and maintenance of the orbiting laboratory. The first spacewalk in support of International Space Station assembly and maintenance was conducted on Dec. 7, 1998, by NASA astronauts Jerry Ross and Jim Newman during space shuttle Endeavour’s STS-88 mission. Astronauts completed attaching and outfitting of the first two components of the station, the Russian Zarya module and the U.S. Unity module.

Astronauts sped through the landmark 200th spacewalk at the International Space Station, after a glitch in preparations left them looking at a shortened trip outside.

This marked the ninth spacewalk for space station commander Peggy Whitson and the first for flight engineer Jack Fischer. Whitson beat the record for the most time spent on spacewalks by a woman on her last excursion out of the station, in March.

But it was a new experience for Fischer.

"Oh my gosh; this is beautiful," he said after getting his bearings outside the station.

"Isn't it?" Whitson said with a laugh.

"About a fondue pot — a ginormous fondue pot bubbling over with piping-hot awesomesauce," he replied.

("We had a bet going as to when the first 'awesome' would show itself," mission control replied.)

But it wasn't awesome from the beginning. The spacewalk suffered a delayed start when one of the service and cooling "umbilicals" that charge up the spacesuits before exit sprung a small water leak, so the two astronauts had to trade off use of the other umbilical for power, oxygen, communications and cooling as they prepared to leave the airlock. Because of the decreased battery charge on both spacesuits, the astronauts focused on their most important task first for an abbreviated spacewalk.

The spacewalk officially began at 9:08 a.m. EDT (1308 GMT), one hour after the planned start time, and the duo went straight into the main task: to install a 200-lb. (90 kilograms) express carrier avionics box onto one of the four "spare parts depots" outside the spacecraft, where they replaced one that had been experiencing thermal issues. The astronauts spent 4 hours and 13 minutes on the spacewalk, and managed to blast through much more work than expected.

Fischer rode the station's Canadarm2 robotic arm, driven by French astronaut Thomas Pesquet from inside the station, to help maneuver the bulky spare box that Orbital ATK's Cygnus supply spacecraft delivered to the station last month. The avionics box will carry data connections and electricity to science experiments at the station.

The duo got through the task so quickly that they were given the go-ahead to add back a few more. First, Whitson installed a connector on the $2 billion Alpha Magnetic Spectrometer to help engineers analyze the sensitive particle detector for future cooling-system repairs. Then, Fischer secured insulation that had come loose at the wrist of the Japanese laboratory module's robotic arm.

Fischer was also able to install a protective shield and a foot restraint on PMA-3, an attachment that will help commercial craft dock with the station via a future International Docking Adaptor. It wasn't originally assigned as Fischer's task, so Whitson and NASA astronaut Kjell Lindgren, spacewalk communicator back on the ground, guided him through the steps.

The spacewalkers "breezed through" and mananged to get to all of the major tasks originally planned for the spacewalk, despite the wrinkles at the beginning and limited time available, an announcement at Johnson Space Center in Houston said. The two remaining minor tasks, installing a high-definition camera and pair of wireless antennas, will be rescheduled for a later spacewalk.

The first spacewalk in service of the space station, in December 1998, focused on attaching the orbiting lab's very first modules: the U.S. Unity module, which NASA crew brought into space on the space shuttle Endeavor, and the Russian Zarya module, which had already been launched into orbit.

Since that time, space fliers from around the world have ventured out on spacewalk after spacewalk to build it into the complex network of living space and experiments it is today, hosting research and experimentation 250 miles (400 km) above the Earth.

"This is amazing, to be able to do the 200th EVA [extra-vehicular activity] on board the space station," Whitson said as the spacewalk came to an end. "It's a huge honor to work with all of you."

"Only because of legends like Peggy, and Jerry Ross and [Jim] Newman [who took that first station spacewalk] and the guys who started this, that made this possible," Fischer replied. "They created this amazing floating laboratory in the sky that we call home, and [did] one heck of a job. It's humbling to be a part of their legacy."

Racing the clock through a compressed timeline, the spacewalkers also managed to carry out three other tasks that were initially deferred because of problems that used up spacesuit battery power before the crew exited the airlock. Two other lower-priority jobs were deferred to a future spacewalk, but flight controllers were pleased with the results.

"This is amazing, to be able to do the 200th EVA on board the space station," Whitson said as the excursion ended. "It's a huge honor to work with all of you."

"Today threw us a lot of curve balls," astronaut Kjell Lindgren in mission control told the crew. "We were basically game six, bottom of the ninth, down by three and you guys ... hit a grand slam. So thank you."

Running more than an hour behind schedule, U.S. EVA-42 began at 9:08 a.m. EDT (GMT-4). Whitson, making her ninth spacewalk, and Fischer, making his first, opened the hatch a few moments later and then floated outside to begin an expected four-hour excursion.

"Oh my gosh, this is beautiful!" Fisher exclaimed, taking in the view from 250 miles up.

"The biggest slice of awesome pie I've ever seen," said Fischer, using one of his favorite words to describe the scene.

The astronauts originally planned to spend six-and-a-half hours outside the station, but the crew ran into problems when a small water leak was found where an airlock power-and-cooling umbilical attached to Fischer's spacesuit.

The airlock is equipped with two such umbilicals to provide cooling water, power and data while the astronauts are inside the station, preserving the suits' batteries for the actual EVA.

With one umbilical out of action, Whitson and Fischer had to share the remaining power and cooling line, swapping it back and forth periodically. But that meant each astronaut, in turn, had to rely on suit battery power when the umbilical was not attached.

Playing it safe, flight controllers at the Johnson Space Center decided to shorten the spacewalk to four hours and to eliminate all tasks other than the highest priority item, replacement of a 200-pound avionics box on an external logistics platform.

But Whitson and Fischer completed the installation work faster than expected and flight director Greg Whitney cleared Fischer to press ahead with work to repair insulation on a Japanese robot arm.

Whitson was directed to install a "terminator cap" in a circuit used by a high-energy physics experiment -- the Alpha Magnetic Spectrometer -- to help verify a data path that may be used later to help resolve cooling problems.

Flight controllers later decided Fischer had enough remaining battery power -- with a comfortable reserve margin -- to install micrometeoroid shielding on a docking port being prepared for use by commercial crew ferry ships. Two other tasks -- installation of a high-definition camera and a pair of wireless antennas -- were deferred to a future outing.

This was the 200th spacewalk devoted to station assembly and maintenance since construction began in 1998, the fifth so far this year, the first for Fischer and the ninth for Whitson, who is working through her third long-duration stay aboard the laboratory, her second stint as commander.

Going into today's spacewalk, Whitson had logged a cumulative 53 hours and 22 minutes of EVA time over eight previous outings, putting her fifth on the list of most experienced spacewalkers and No. 1 among females with EVA experience.

With a full-duration 6.5-hour spacewalk, Whitson would have moved up to third in the world with nearly 60 hours of EVA time. But today's EVA ran just four hours and 13 minutes, leaving her at No. 5 with a total time of 57 hours and 35 minutes, just 20 minutes shy of the mark set by Jerry Ross at the No. 4 spot.

At the Kennedy Space Center, meanwhile, SpaceX is continuing preparations to launch an Inmarsat communications satellite Monday from historic pad 39A. Assuming that flight goes well Monday, the California rocket builder should be clear to press ahead with launch of a station-bound Dragon cargo ship on June 1.

One day later, Soyuz MS-03 commander Oleg Novitskiy and European Space Agency astronaut Thomas Pesquet plan to return to Earth, landing on the steppe of Kazakhstan to close out a 196-day mission. The Dragon supply ship is scheduled to arrive June 4.

Novitskiy and Pesquet blasted off with Whitson last November 17, but her mission was recently extended and she now plans to remain in orbit until Sept. 3, joining Fischer and Soyuz MS-04 commander Fyodor Yurchikhin for the ride home. Yurchikhin and Fischer launched April 20 with an empty seat, part of a Russian effort to reduce costs.

With landing Sept. 3, Whitson's total time in space over three missions will stand at 666 days, moving her up to eighth in the world, just behind Yurchikhin at No. 7 with 673 days in orbit and six other cosmonauts. Gennady Padalka, with 878 days over five flights, tops the list.